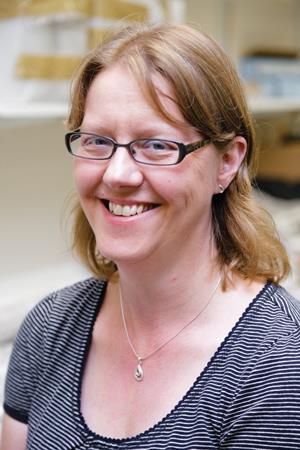 Wendy Brown is professor of physical chemistry at the University of Sussex, UK. Her research reproduces the cold and low pressures of space to model chemical reactions that occur when particles are brought together on interstellar dust grains.

How did you come to work in astrochemistry?

By accident, actually. I was interested in low temperature infrared spectroscopy – low temperature being liquid helium temperatures – which I studied for my PhD. When I moved to University College London (UCL) for my first academic job, the UCL Centre for Cosmic Chemistry and Physics team were looking at various surface processes that might be of interest to astronomers and astrochemists. This was almost the first time that ultra-high vacuum –  really low pressures that surface scientists usually use – and really low temperatures were actually relevant to a real life situation. I’m a surface chemist with an interest in undertaking spectroscopy at very low temperatures, and astrochemistry is the perfect application for this.

What are you working on at the moment?

Over the last couple of years we’ve spent quite a bit of time looking at more complex organic molecules. Complex organic molecules are considered to be incredibly important in interstellar chemistry because they are potential precursors for what you might call the molecules of life. We have a big project looking at glycolaldehyde1 – my astronomy colleagues consider it to be the simplest sugar in space. We’ve been looking at glycolaldehyde itself and its structural isomers, acetic acid and methyl formate, and how they stick onto surfaces (model grain surfaces), along with the thermal processing of those ices so we can look at how these things end up back in the gas phase after they’ve been found on the grain surfaces. We’ve also looked at their stability to ultraviolet (UV) irradiation because stars give out a lot of UV light and UV light can dissociate things, so our work has included some photochemistry.

A lot of time was spent looking at both the growth of these species and their stability on grain surfaces. We’ve collaborated with colleagues at UCL who have put our data concerning thermal processing and, ultimately, our data concerning UV processing into astronomical models – we’re still in the process of analysing that data.

As well as looking at pure species, we look at glycolaldehyde, acetic acid and methyl formate in association with water ice. Dust grains in interstellar space are covered in ices. When I say ice you probably think of water ice but I’m talking about molecular ice – ices containing water, methanol, ammonia, carbon dioxide, carbonyl sulfide – but the main component is water. It’s very important to look at how these species interact with water because that’s the main thing in the ice. We want to know how these things grow on top of and within water ice, as a mixture, to find out how that affects the thermal processing and UV processing of the species.

What questions are you hoping to answer with your research?

Ultimately we hope to understand how complex organic molecules were formed in space and what their stability is when they’re formed. Do they hang around long enough to become precursors to prebiotic species? Also, very importantly, there has been a lot of debate in the astrochemistry community about how we might form them and where we might form them. Are they formed in the gas phase or on the surface of grains? By looking at chemistry on the surface of grains we’re hoping to be able to answer those types of questions. And again we can only do that in collaboration with astronomers who have models of all the reactions that take place in different regions of space. So the numbers we produce in the laboratory go into their models and help them to understand how we might make these molecules.

How do you go about studying space chemistry in the lab?

We use a carbonaceous surface, which is basically graphite, to model dust grains. Dust grains are considered to be carbonaceous and silicaceous in nature. We have a graphite sample in a vacuum chamber and we cool it down to around 20K with a closed-cycle helium cryostat to model the temperature of the dust grains. What we then do in our vacuum chamber is we grow ices in situ on top of that surface.

So if we wanted to look at a glycolaldehyde in water ice we would dose glycolaldehyde and water into our vacuum chamber and grow the ice to an appropriate thickness. We then analyse it with various spectroscopic tools. One of the main tools we use involves infrared spectroscopy, but we do it in a different way compared to that which most people are used to. Most people use it in a transmission mode where you pass light through your sample, but we’ve got samples that are not transmitting because they are a solid piece of graphite. So we do infrared spectroscopy in a reflection mode.We reflect the light off of our surface – the difference between the incident and the reflected light then gives us an infrared spectrum of the things stuck to our surface. It still acts as a fingerprinting technique to tell you what you’ve got on the surface. We also use mass spectrometry in a technique called temperature programmed desorption.2 In that situation we have our model grain covered in ice and we heat the surface by ramping up the temperature in a linear manner. Mass spectrometry is used to tell us what’s coming off the surface as a function of temperature. We can identify the things coming off the surface, as you always would with mass spectrometry, by its mass and we also record the temperature at which different things come away from the surface. Something that comes off the surface at a high temperature is strongly bound and something that comes off the surface at a low temperature is weakly bound, so you can determine the strength of binding of the species to the surface. Of course we can also look at reactions. Let’s say you dose one thing onto the surface but then it reacted with water to make a new fragment – you would be able to see this with the mass spectrometer. If we were looking at UV irradiation we would take the ice that we’ve grown, irradiate it with light and record the infrared spectra during irradiation to see what was formed and what was disappearing. After we’ve finished that process we’d then use temperature programmed desorption as a complementary tool to the infrared spectroscopy.

Do you look at a particular region of space?

We are interested in the interstellar medium – the space in between the stars. This is because we are mainly interested in star forming regions and that is where you find most of the molecules – as chemists we look at molecules – how they’re made, what they’re doing, etc.