Xenon from deep within the Earth’s mantle has shone a light on the planet’s formation and early evolution. The isotopic signature of this earthly xenon has been shown to resemble that of primitive meteorites and differs markedly from the profile of the gas found in the atmosphere, which is mysteriously missing most of its xenon.

The origin of Earth’s volatile elements such as water, carbon and nitrogen remains a puzzle. It is difficult to determine if these elements originated from solar gas after the solar system formed or were delivered by asteroids or comets. 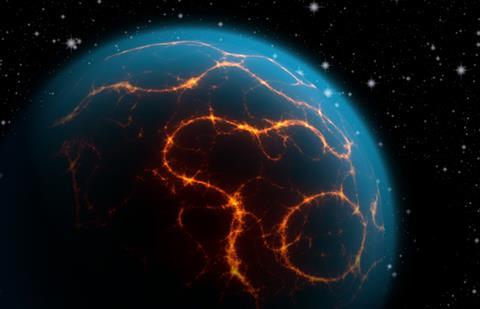 A new study, which sampled xenon from carbon dioxide-rich mineral spring gas from the volcanic Eifel province in Germany, points to an asteroidal origin for part of the volatile elements trapped in Earth’s mantle – planetary bodies whose remnants now lie between Mars and Jupiter. The mysterious xenon in the atmosphere came from elsewhere, possibly comets.

‘We conclude that this [mantle] component was contributed by asteroids when the proto-Earth was still building up,’ notes senior author Bernard Marty at the University of Lorraine, France. ‘The ancestor atmosphere xenon was contributed later on at the Earth’s surface, by late bombardments, and never mixed up with mantle xenon.’ This late bombardment occurred around 800 million years after Earth’s formation and might have involved cometary bodies. The isotopic signature of xenon on comets is unknown, however.

The extraterrestrial chondritic xenon found in the mantle has been isolated for 4.45 billion years. It also proves that volcanism in Eifel relates to upwelling from the deep mantle, likely to be over 700 km deep.

‘It’s a small step forward to show that mantle xenon came from meteorites, but the big step forward is showing that this component is not related to the atmosphere,’ says Christopher Ballentine, a geochemist at the University of Oxford, UK, who was not involved with this work.

Atmospheric xenon’s origin was not just from outgassing of the mantle and is more complex, Ballentine explains. ‘Nobody has measured xenon composition in comets yet, so maybe that is the source,’ he adds. Around 90% of the xenon expected to be in Earth’s atmosphere is missing, with various theories posited. The enigma of the ‘missing xenon’ and where it went is one of the big unsolved puzzles in geochemistry.

‘Understanding xenon really is a lynchpin for understanding the early formation of volatiles. And resolving how volatiles arrived at the planet tells us something fundamental about the way in which the planets formed,’ Ballentine says.