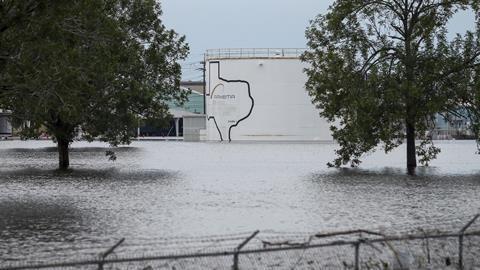 Why chemicals at the plant devastated by hurricane Harvey have ignited

In the aftermath of hurricane Harvey, chemicals stored at a plant in Crosby, near Houston, US, have begun to ignite. Experts are warning that future fires and explosions are extremely likely. How did this happen and what can be done to contain the situation?

What does the Arkema chemical plant manufacture?

The plant makes organic peroxides. These are used for the production of various chemicals – from pharmaceuticals to building materials – and as catalysts for industrial processes such as the manufacture of polymers and resins.

The raw materials stored at the plant include hydrogen peroxide as well as various organic materials.

What has happened at the plant?

The peroxides kept at the plant are notoriously unstable. Chemist Andrea Sella from University College London, UK, explains that ‘a peroxide compound in essence contains both the fuel and the oxidiser in the same molecule and is therefore only one small step away from ignition’.

‘[There are often] specific directions for their handling and storage both in small laboratory situations and in industrial settings. It is crucial to keep them cool and typically separate from other materials, especially those that are flammable. In the case of industrial sites, the quantities of these materials can be very significant indeed, heightening the risks,’ Sella says.

A rise in temperature causes peroxides to decompose, releasing energy and kick-starting a self-accelerating process which causes them to break down faster and faster. This carries on until the temperature gets high enough for the material to ignite.

For this reason, many of the compounds at the Arkema plant were stored at low temperature to stabilise them. However, the floods knocked out both the main power supply and the backup generator at the plant, meaning the electronically controlled cooling systems could not be maintained. As a result, there have been fires within the plant and pressure valves in one of its refrigerated containers have burst. Arkema say there are eight more containers containing chemicals that are expected to decompose in this way, raising the possibility of more fires and explosions.

Peroxides don’t normally explode, do they?

Peroxide-containing consumer products – cleaning agents, hair dyes and so on – are kept in small, airtight containers and usually don’t contain a high enough concentration of the peroxide for it to explode without being ignited. Nevertheless, you’ll notice the bottles always carry a warning that their contents are flammable and consumers are advised to store them in a cool place.

Accidents can happen, however. In 2010, a 19-year-old hairdresser in the UK was killed when she accidentally ignited fumes from a leaking bottle of peroxide bleach in her car by lighting a cigarette.

Is there a danger to the public from the Arkema plant?

The area within 2.4km of the plant was evacuated before the explosions started to protect residents from any noxious fumes.

Tony Ennis, director of risk assessment consultancy Haztech Consultants, says the fumes could contain ‘small amounts of toxic materials’. Several police officers who were present at the scene when the plant began to explode have been taken to hospital for health checks after inhaling the smoke, and anyone who thinks they might have been exposed has been advised to seek medical advice. With floods making the plant inaccessible, Ennis adds, the safest thing to do is allow the fires to burn out while watching from a safe distance.

Senior executives at Arkema say that more fires are likely to happen and that people should continue to avoid the area. They hope that the explosions and fires themselves will likely be contained within the plant.

What about the environment?

It is too early to tell what the long term effects may be. The Environmental Protection Agency has been trying to assess the immediate aftermath using aircraft surveys and on-site personnel. It says that so far they have found ‘no concentrations of concern for toxic materials’.

What can be done to contain such an incident?

In their official statement, Arkema said they will ‘continue to work closely with federal, state and local authorities to manage the situation’.

They say they have agreed with public officials that the best course of action is to wait for the fire to burn itself out. However, it is unknown how long the materials at the plant will take to decompose. ‘Product is stored in multiple locations on the site, and a threat of additional explosion remains,’ Arkema says.

Those living in the evacuated area have been told that it is still not safe to return home.

Update: following this article, on 3 September 2017 Arkema deliberately ignited and burned the remaining tanks at the plant to allow crews to manage the incident effectively. The exclusion zone remains in place and the controlled ignition did not pose any additional risk to the community.