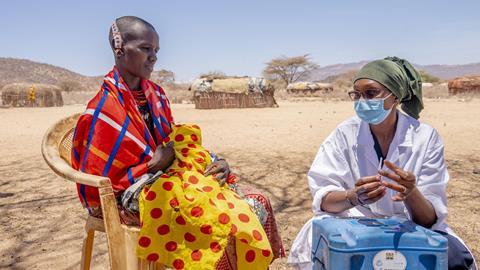 Hard-won gains from vaccines are at risk. Far too many people still do not have access to the vaccines they need, with nearly 20 million infants missing out each year, according to Tedros Adhanom Ghebreyesus, director-general of the World Health Organization (WHO).

His warnings preface a WHO report on the global vaccine supply chain, which calls on governments, industry and international institutions to do more to boost sustainable and equitable access to vaccines.

More than 90 manufacturers supplied vaccines to WHO member states in 2021, yet supply remains highly dependent on fewer than 10 manufacturers, the report notes. Often, for individual vaccines, there are only two or three suppliers.

Meanwhile, some countries and regions remain better place than others. In 2021, the African and eastern Mediterranean regions depended on vaccine makers headquartered elsewhere for 90% of their vaccines. Moreover, too few vaccines are developed for diseases that are viewed as unprofitable.

‘Vaccine supply has historically been unable to rapidly respond to significant changes in demand, both owing to technological challenges and to a lack of market incentives,’ the report observes. ‘Vaccines are typically manufactured in product-specific facilities and product changeovers are cumbersome, limiting flexibility.’

There are also disincentives for manufacturers to scale-up, such as intellectual property rights protection concerns and uncertain demand. Lower-income countries struggle to access vaccines, with the human papillomavirus introduced in 41% of lower income countries, versus 83% of high-income countries.

Nonetheless, there was a three-fold increase in vaccine doses procured globally within the last year for Covid-19, the report notes. This spotlighted the need to reconsider the value of vaccines as a public good rather than a commodity. ‘Free-market dynamics do not optimize for social and health impact,’ the report warned, and without changes, manufacturers will ‘continue to concentrate on more profitable pharmaceutical interventions and on high-income market vaccines’.

The report is critical of a lack of transparency along the value chain of vaccine manufacturing and distribution, and a lack of government oversight. This left many countries – rich and poor – struggling to plan and use vaccines efficiently, within national boundaries as well as across countries.

Governments should take risks and invest aggressively to address vaccine needs and prepare for future emergencies. They can improve market preparedness by investing in new vaccine technologies, R&D and manufacturing, and heighten oversight along the vaccine value change.

Industry has a role too. Companies need to be cognisant of the WHO’s list of priority pathogens, and ‘commit to specific measures allowing for equity-driven allocation of products’. Industry should commit to setting up provisions for technology transfer, the report states.

It won’t be plain sailing. ‘The large manufacturers are opposed to having any kind of government control or involvement in their assets,’ says Rob Handfield, a supply chain management expert at North Carolina State University. ‘They want to control them and to control access, but I don’t think we can rely on the private sector to ensure vaccines are dispersed in the way that they are needed.’

He adds that ‘there is little visibility in terms of these supply chain networks, so that companies don’t know who the suppliers of their suppliers are’. This led to bottlenecks and supply shortages, including for consumables such as vials, but there is likely to be more oversight in future. ‘Agencies such as the [US Food and Drug Administration] are starting to put in regulations that will require manufacturers to register their suppliers,’ says Handfield.

Another lesson from the pandemic is that countries cannot outsource everything to Asia and expect smooth supply. ‘Our supply chains are fragile when we outsource to remote countries, and maybe we need secondary domestic sources that can supply us in a pinch,’ Handfield says. The Biden administration is now funding more resilient supply chains.

The WHO report also advocates diplomacy between countries and ‘pre-defined and binding rules for vaccine distribution at a time of scarcity’, which would require a more favourable intellectual property situation, proactive technology transfers and the building of local technical and regulatory capacity.

‘One of the models for vaccines is domestic production, if we can get some of these larger pharma companies to license production within countries and distribute domestically,’ Handfield says.