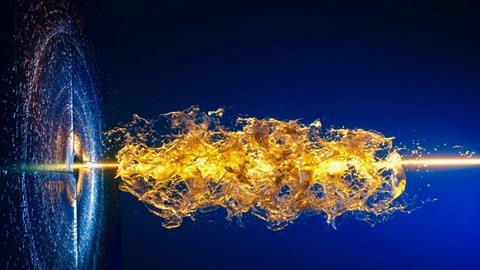 A new x-ray crystallography technique can better elucidate the structures of the many materials that don’t form tidy, single crystals. The method developed by a large, multi-institutional research collaboration could help investigate the structures of compounds such as solar absorbers and metal–organic frameworks.

The new technique, dubbed small molecule serial femtosecond x-ray crystallography (smSFX), brings to bear much more powerful, focused and higher-speed x-ray beams than other x-ray sources for crystallography. It only takes a few quadrillionths of a second to complete the entire process, from x-ray pulse to diffraction image. 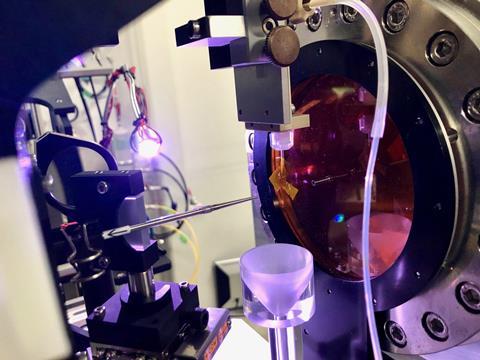 Before crystallography can be used to map the density of electrons in a molecule based on how it diffracts x-rays, a large crystal around 0.1mm long is normally needed. But smSFX augments traditional crystallography by adding custom-built image processing algorithms and an x-ray free electron laser (XFEL), which allows scientists to use crystals approximately 10 to 100 times smaller than those used in typical single-crystal experiments, explains Daniel Paley, a computational crystallographer at Lawrence Berkeley National Laboratory (LBNL) who is co-first author of the paper. ‘This means that many samples that were previously too small, are now usable for crystallography,’ he says.

Serial femtosecond crystallography has only been used for proteins so far and not on small molecules. Several complications had to be resolved before the research team could apply SFX to small molecules. Foremost among these is that while a large molecule’s crystal will produce a large diffraction pattern that involves hundreds of spots making it easy to interpret, a small molecule crystal will only give a few diffraction spots and yields a sparse pattern making it hard to deduce the crystal’s orientation.

That’s where the work of one of the paper’s co-authors, computational crystallographer Aaron Brewster from LBNL, came in handy. Back in 2015, he published a paper that demonstrated an algorithm for recovering crystal orientations from sparse diffraction patterns. The new study represents the first time this algorithm has been used on an unknown sample.

‘In order to apply Aaron’s algorithm … we first had to find the unit cell of the crystal, which is another problem never previously solved for this challenging case where the diffraction images are sparse and randomly oriented,’ Paley recalls. The team developed a method to convert the serial dataset to a high-quality powder diffraction pattern, which allowed the unit cell to be determined.

‘It was always clear that you should be able to use SFX for small molecules, but there were several very hard practical obstacles, and in this paper we demonstrate ways of solving those problems,’ Paley states.

Beyond demonstrating proof-of-principle for smSFX, the researchers were able to use the technique to determine the structures of three compounds that form microcrystal powders, including two that hadn’t been identified before – thiorene (AgSPh) and tethrene (AgTePh).

The applications of smSFX are broad. ‘Basically, smSFX should be an option for any chemist or materials scientist who needs to do a crystallographic study on a compound that only forms microcrystals,’ Paley says. He notes that there are many compounds fitting that description, and most synthetic chemists have experienced that problem at some point. ‘When chemists can easily get crystal structures of microcrystals, it will be easier to do synthetic chemistry.’

A ‘powerful demonstration’ of XFEL’s benefits

University of Connecticut graduate student Elyse Schriber, another co-author of the study who is also affiliated with LBNL, said the new work could help to connect the dots between a material’s structure and its function. ‘After further improvements are made to streamline the smSFX process, we can imagine programmes to offer this technique to other researchers,’ she added. ‘These types of programmes are integral for increasing access to light source facilities, especially for smaller universities and colleges.’

Adam Kirrander from the University of Edinburgh, UK, who was not involved in this research but has used x-rays to observe the initial step of a light-driven reaction, is impressed by the study. ‘This work is a powerful demonstration of how chemistry research benefits from the new XFEL facilities that are being built and developed worldwide – an experiment such as this would not have been possible at a synchrotron,’ Kirrander tells Chemistry World.

He points out that molecular structure determination is a cornerstone of modern chemistry and its importance is underscored by the exponential growth in the number of molecular structures in databases like the Cambridge Structural Database. But Kirrander also notes that this success belies the difficulty and challenge involved in growing molecular crystals of sufficient quality for crystallography.

‘This paper reports elegant experiments that demonstrate a serial version of powder diffraction: the authors exploit the extreme brightness of x-ray free electron lasers to record individual diffraction patterns from thousands of microcrystals, one at a time,’ he continues. ‘By using clever algorithms to sort and index the diffraction images they are able to obtain high quality datasets that far surpass what one could have achieved in traditional powder diffraction.’

Going forward, Kirrander says it will be exciting to see how experiments such as this will reveal more and more unusual geometries and rare conformations of molecules.