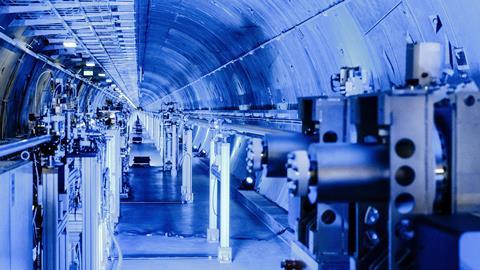 Researchers have built a case arguing that the UK should invest in a major x-ray free electron laser (XFEL) that would be superior to existing facilities around the world. The team is now asking other scientists to complete a short survey to express their support by the end of June. The facility would begin operation after 2030, with costs and the exact location to be determined at a later date.

XFELs produce femtosecond x-ray pulses that are one hundred-thousandth of the duration of pulses from large-scale synchrotron sources, and millions of times brighter. Such beams can reveal rapid changes in substance’s structure through diffraction, and illuminate their changing electronic make-up spectroscopically. They give scientists the opportunity to study natural and technologically important processes in more detail than ever.

Today, there are five countries operating XFELs. The UK is already a partner country of the European XFEL is in Hamburg, Germany. There are also facilities in the US, Japan, Switzerland and South Korea. Marangos estimates that the existing facilities receive more than five times more applications for access than they can accept. Two more are now being built in China, as well as another in the US. ‘It is very important that the UK continues to develop its plans in the area of XFELs,’ Marangos says. ‘In the last decade there has been an explosion of scientific impact from these machines.’

Over the past two years scientists from many disciplines have built a scientific case for the UK joining these nations. They are now proposing a facility with ambitious capabilities. It will be able to synchronise with many other electromagnetic radiation sources producing ultrafast pulses, from terahertz frequencies, through the visible spectrum, to the extreme ultraviolet.

The science plan also indicates that the UK XFEL will produce higher spectral purity x-rays than other facilities. A key benefit of lasers is that they produce radiation with high spectral purity. The waves that lasers output are predominantly coherent, travelling in phase. However there is still some small degree of spread, or noise, in existing XFELs, explains David Dunning from the STFC Accelerator Science and Technology Centre in Daresbury. The UK machine hopes to exploit technologies that will reduce that noise by an order of magnitude.

XFEL facilities use self-amplified spontaneous emission (SASE), where long passages filled with undulator magnets of alternating polarity force beams of electrons to ‘wiggle’ from side to side. When electrons change direction they emit light, with XFELs tailored so that their electrons produce x-rays. If the electrons were just in a random cloud, the light would be completely incoherent. In SASE, the x-rays interact with the electrons, helping align them into tight bunches that produce a coherent beam.

XFELs already make beams even more coherent using separate lasers or their own x-rays to prepare, or ‘seed’, bunches into alignment before they enter the undulators. Dunning explains that seeding ‘dominates the noise with a clean external signal’. ‘Our aim would be to do significantly better still,’ says Dunning. ‘One of our main targets would be to extend laser seeding further into the soft x-ray and to significantly higher repetition rates.’ The new XFEL also plans to exploit other approaches that filter and smooth the x-ray pulse. These include high brightness SASE, an approach developed by UK scientists including Dunning, which is due to be tested at Switzerland’s SwissFEL this year.

Marangos describes the UK’s Science and Technologies Facilities Council (STFC) as ‘quite supportive’ of the idea of a new facility. The country’s overarching funding agency, UK Research and Innovation, is now deliberating the plan, he adds. However, to move to the next stage, the proposal needs to demonstrate wide based community support by getting researchers to complete the related survey by the end of June.

The UK facility will not undermine the country’s involvement with the European project in Hamburg, Marangos says. Researchers will remain dependent on the European site at least until the UK facility is built in 2030, he adds. ‘In many respects that would continue to be the case in the future,’ he says. ‘These plans are discussed with the other major XFELs, who have plans of their own.’

Scientific team member Adam Kirrander from the University of Edinburgh highlights that the UK previously considered an XFEL in 2008–2010 but ‘balked at the high technical and scientific risks’. ‘Today, we know that these machines work and produce copious quantities of great science, and the highest risk is associated with doing nothing,’ he says.