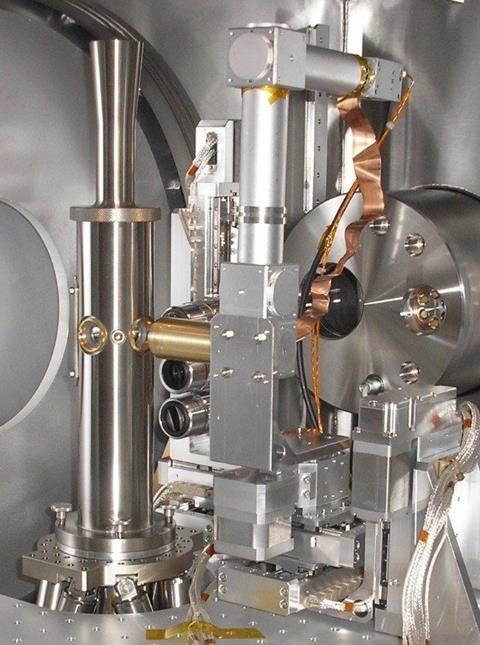 The experimental chamber where the biological samples were probed with high-intensity, exceptionally rapid pulses of x-rays

Results from the first analyses performed using the new European X-ray Free Electron Laser (XFEL) – a facility capable of producing one million x-ray laser pulses per second – have been published.

Based near Hamburg in Germany, the European XFEL cost €1.5 billion to build and was launched in 2017. It generates high-intensity x-rays by accelerating electrons inside a 3.4km long tunnel that runs from the DESY synchrotron in Hamburg to the XFEL labs in Schenefeld. Experiments began last September, and now the first paper based on XFEL data has been published.

An international team of scientists led by Ilme Schlichting at the Max Planck Institute for Medical Research in Heidelberg used the XFEL to probe the structures of biological proteins, including microcrystals on the enzyme lysozyme, using x-ray exposures that last only a few femtoseconds.

The team were able to deal with some of the challenges of taking measurements – they showed, for example, that the data weren’t altered or distorted by the extremely high frequency x-ray laser pulses hitting a sample just a millionth of a second apart. The researchers were also able to analyse the structure of one previously uncharacterised sample in detail, a protein found in jack beans called concanavalin A.