Working through the Pains of pyrrole 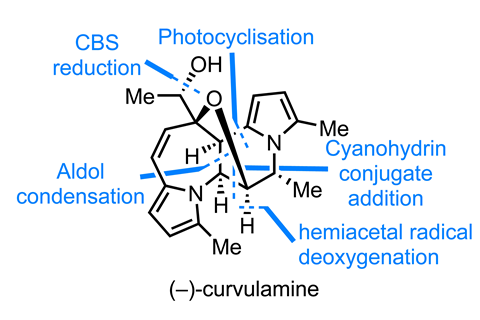 When you’re looking at a target or drawing out intermediates in a synthesis, certain functional groups just make your heart sink. They might bind to transition metals, be reactive when you don’t want them to be, complicate purification – or sometimes all of the above. Amusingly, medicinal chemists have a term-of-art for these kinds of red-flag functionalities: Pains (from Pan-Assay Interference compounds). The term originates in a seminal 2010 paper that listed functional groups known to confuse high-throughput screens, so researchers could avoid these Pains in the ass(ay).1

I’m not aware of a similar list for synthetic chemists, but experience (both mine and co-workers’) has made me leery of more than a few compound classes. I’ve had tetrazoles that bound palladium so tightly that you could column the complexes that they formed. Non-hexavalent sulfur is wildly oxidation sensitive and quite alkylatable – until the minute that you need to cleave a dithiane protecting group. And even fundamental things like carboxylic acids and amines are nightmares to carry through the shortest synthetic sequences unless larded with protecting groups.

A more insidious family is the electron-rich five-membered heterocycles, especially pyrrole. Oxidisable? Extremely! Nucleophilic? Check! Reasonably acidic proton? Yup, and it’s also pretty acid sensitive, being named for its characteristic fiery red decomposition products. In theory, pure pyrrole is colourless, but I’ve never seen a bottle that wasn’t dark brown or black as it always finds something to react with. Pyrroles are both Pains and pains.

I’d be wary of tackling a natural product containing even a single pyrrole, so I’m particularly impressed with the recent synthesis of the bispyrrole curvulamine from Tom Maimone and co-workers at the University of California, Berkeley, US.2 The group’s synthesis starts with the conjugate addition of a cyanohydrin acyl anion equivalent to an unusual-looking 10π pyrroloazapinone. N-iodosuccinimide traps the resulting enolate. At first glance, this anion addition seems to go for the less reactive-looking of the two enones but remember, pyrrole’s electron density isn’t really on nitrogen – it protonates at the adjacent carbon.

Next up, an interesting photocyclisation that reminds me of the classic Witkop indole coupling. Initially the group sought to reduce the alkyl iodide to effect a radical cyclisation using single electron reductants and photoredox catalysis. These reactions gave a little product, but not nearly as much as when no catalyst was used and the substrate was simply irradiated with an LED lamp of the correct wavelength. This kind of thing happens more often than you’d think, so always remember to run those control reactions!

Addition of lithiated ethyl vinyl ether (a second acyl anion equivalent) delivers the final two carbon atoms in the target, and the team is just a little stereochemistry and oxidation-state juggling away from victory. First up, sodium methoxide can epimerise the methyl stereocentre between the pyrrole and the lactol. This is initially generated as a mixture of epimers, but with a majority of the undesired epimer – equilibration with base gives a preference for the desired configuration, and the minor epimer can be recycled later in the synthesis.

The team can then burn out the unwanted lactol hydroxyl and just needs to reduce the remaining ketone to finish the target. However, it’s almost thwarted by the substrate’s unwavering preference for producing the alcohol with the opposite configuration to that desired when exposed to common hydride reducing agents. Using a full equivalent of the chiral Corey–Bakshi–Shibata catalyst overcomes this selectivity, and conveniently resolves the racemic ketone to give (–)-curvulamine as one of a pair of separable, near-enantiopure diastereomers.

I recently saw Maimone give a jeremiad of a talk on this work, which was nowhere near as straightforward as the paper makes it look. So congratulations to the team on eventually getting the best out of pyrrole’s innate reactivity while sidestepping the numerous pitfalls it creates.