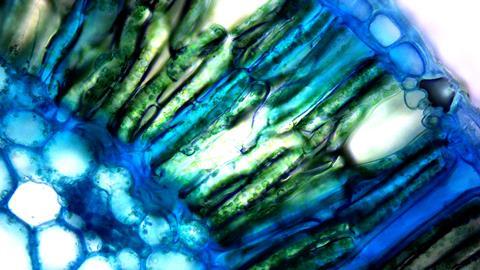 Rosanne Quinnell is a biochemist turned botanist. Her PhD explored a bacterium living in symbiotic association with soybean nodules. ‘It’s a bacterium that can fix atmospheric nitrogen to make it available in its biological form for plants,’ she explains. ‘That’s why people eat soybeans if they’re vegans … it’s accessible nitrogen for humans.’

Quinnell ­– an associate professor in the school of life and environmental sciences at the University of Sydney, Australia, and deputy director of the Sydney Environment Institute ­– thinks that her drift towards the botanical was influenced by her mother’s ‘absolute love of plants’.

‘I’ve converged from looking at the chemicals that make up organisms in a test tube towards ecosystems and the botanical world around them,’ she says. ‘I morphed from looking at tiny things to appreciating big things and big systems.’ 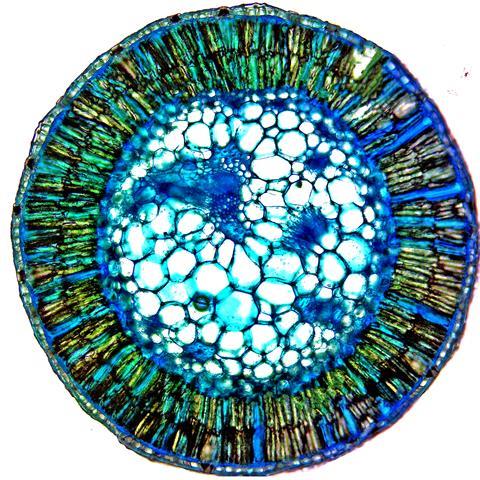 A cross-section of the shrub Hakea sericea, stained with toluidine blue

To better understand those bigger systems, it is still sometimes necessary to zoom in a little. As we chat, Quinnell shares some beautiful images of magnified slithers of Hakea sericea, a large shrub native to south-eastern Australia. ‘Toluidine blue,’ she answers when I ask about the colours. ‘That’s one of our favourite stains in plant anatomy. It’s a differential stain; cellulose stains purple and lignin stains a range of blues depending on its composition, and you still get the colour of the chloroplast … you’re getting this array of colours from green to blue to purple when you look down the microscope.’

The images are a timely reminder of the exquisite biochemical machinery of plants – not just in fixing carbon and providing oxygen but also in generating nutrients and metabolites that are the source of myriad medicinal compounds.

Quinnell is concerned that the status of botany in higher education is diminishing. ‘Up until about 30 years ago, people studying pharmacy had to do botany as part of their course,’ she says. She believes that this shift has also led to a decline in the numbers of people who are able to identify plants, a skill she wants to pass on to as many students as possible.

In fact, she directly tells the students she teaches that she wants them to become botanically literate. ‘Not knowing every word in botany, because the language is dense and can be quite off-putting,’ she says. ‘But if you walk out of this course and instead of seeing a smear of green you can see seven different species and the nuance of the biodiversity in front of you, that to me is a big step.’

Modelling an approach of ‘students as partners’, Quinnell co-created an app with a second-year undergraduate team. CampusFlora supports skills in plant identification. Starting as a map of plants on campus linked to the botany curriculum, the project has since expanded beyond the confines of an assignment into a community project that locates and identifies plants in different trails across the university grounds.

One of the trails, the ClimateWatch Citizen Science trail, aligns with the botanical curriculum and helps students to contribute to research as part of their learning. ‘One of the dangers of citizen science is that you don’t have robust data,’ says Quinnell. In projects relying on observations of plants flowering and fruiting, the data is only useful if citizen scientists have correctly identified the plant they’re uploading data for. This is where CampusFlora helps out. ‘It facilitates improving the robust nature of the data that’s coming in from ecology students,’ says Quinnell.

The CampusFlora team worked with First Nations colleagues to offer the plant names in the Aboriginal language of Sydney, using the book The Sydney Language by Jakelin Troy, who is professor in the Department of Linguistics at the University of Sydney and director of Aboriginal and Torres Strait Islander Research. ‘Plants have now got three names [in the app],’ explains Quinnell. ‘There’s the English name, the scientific name and the Sydney Language name.’

Quinnell places a strong emphasis on the significance of cultural connections to plants in her teaching and community outreach. ‘Having a focus on plants as a scientist has given me this really nice way to expand my interests into cultural narratives, place narratives, human migration narratives and the relationships humans have with plants,’ says Quinnell.

‘Students think that’s fun too. Students are really interested in not only learning science but learning what position science has in society.’