A bit of light work 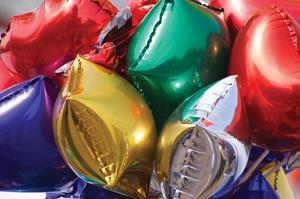 Party balloons. That’s most people’s first thought if you mention helium. But disquiet over the supply of this gas has slowly seeped into the public consciousness. For those who keep up with the news, there’s been a steady stream of stories warning that supplies could dwindle without action.

The current helium supply problems are the result of a historical accident. In 1925, the US government created a helium reserve to keep blimps aloft at a time of war. Helium was extracted from unusually rich deposits in US gas fields – the result of the decay of uranium and thorium. The helium was then squirrelled away underground in the reserve. As blimps became an anachronism, other uses were found for helium and the reserve kept going. But in 1996 the US government decided it was time to get out of the helium business and started selling off its stash to pay off the reserve’s sizeable debts. As the world’s largest supplier opened the taps, helium’s price fell through the floor and there was little incentive to look for new sources.

Party balloons and blimps are all very nice but it seems doubtful that anyone, short of disappointed children, would mourn their loss (it’s worth noting that these uses only account for about 7% of global consumption). However, helium’s properties – its extremely low density and boiling point – have made it exceptionally useful to scientists. Liquid helium is an unrivalled coolant and can be used to chill superconducting magnets for NMR spectrometers and MRI machines, which is what the gas is primarily used for.

Helium prices are now recovering as the reserve will not be closed and the market is no longer flooded with the gas. Rising prices have meant more interest in sniffing out new sources of the gas and a big new find has just been announced– enough to keep the world’s balloons and MRI machines filled for another seven years. But more importantly the team behind the discovery brought some of the rigour of prospecting for oil to helium. And the team thinks further finds are now on the cards.

New helium finds are great news for science. They not only bolster reserves but can also help to stabilise prices. The cost of helium has quadrupled in recent years, which means big bills for labs. But we shouldn’t forget that helium is a non-renewable resource – once it escapes into the atmosphere it simply boils off into space, lost to us forever. So, while we may be on the cusp of a new era of plentiful helium, efforts to conserve and reuse it shouldn’t fall by the wayside – something labs are already investing in. Perhaps we can survive with fewer party balloons too.