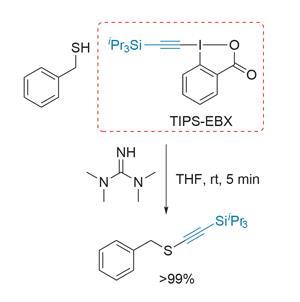 Coupling together thiols and alkynes – both inherently nucleophilic species – is a tricky prospect. Likely strategies involve somehow inverting the reactivity of one component (in an umpolung or reverse polarity reaction). While methods that couple alkynyl or alkenyl halides with thiols, or activated sulfur species with alkynyl nucleophiles have been reported, the reaction conditions or reagents are generally quite harsh, which limits their use.

But the thio-alykyne products of such unions are synthetically very useful, which is why Jérôme Waser and his group at the Swiss Federal Polytechnic in Lausanne (EPFL) sought to exploit highly reactive hypervalent iodine reagents as electrophilic alkyne sources, particularly triethylsilyl-substituted ethynylbenziodoxolone (TIPS-EBX).1

The team’s electrophilic alkynylation of simple sulfur nucelophiles, first reported last year, didn’t catch my attention as much as it perhaps deserved.2 This reaction of a sulfur species and TIPS-EBX, in the presence of a guanidine base at room temperature, typically gives thioalkynes in near quantitative yields in minutes (figure 1).

The reaction is incredibly mild, selective and functional group tolerant. A particularly impressive example includes a cysteine-containing dipeptide in the presence of two unprotected amino acids (figure 2). The reaction proceeds in 97% yield with complete selectivity. The potential value of such a selective and mild reaction, particularly in a biochemical context, is very exciting. This utility is alluded to by the team’s introduction of a dansyl fluorescent tag to the product, via an azide–alkyne 1,3-dipolar cycloaddition.

The team has now investigated the reaction mechanism in detail, combining experimental and theoretical studies.3 They have ruled out one proposal, in which the thiol directly substitutes the carboxylate, followed by reductive elimination of the product – a mechanism established for related iodonium salts. The evidence initially pointed to an alternative reaction pathway commonly observed with EBX type reagents, which starts with conjugate addition of the nucleophile beta- to iodine (figure 3). Alpha-elimination of 2-iodobenzoic acid to give a carbene and a 1,2-migration, probably of the silyl group, generates the product. Surprisingly though, the team established that a third and unprecedented mechanistic pathway is likely to dominate.

Calculations suggest that a three-atom transition state with a low energy barrier (10.8 kcal/mol) is favoured. The thiolate sits between the iodine atom and a distorted alkyne, and a highly exothermic concerted process of a-addition to the alkyne and elimination of the carboxylate leaving group forms the product directly. Not only has such a mechanism not  been considered for EBX type reagents before, it has significant consequences for expanding the scope of the reaction.

Figure 3 â€“ Evidence points to an unusual direct addition mechanism instead of addition, elimination and migration

An electron-rich silyl group (such as TIPS) was thought to be essential for the necessary 1,2-migration in most proposed mechanisms, owing to its high migratory aptitude. As the newly considered reaction pathway does not have a migration component, the TIPS group is no longer a requirement. The team has confirmed this and successfully employed a host of EBX reagents in which the TIPS group is replaced with a variety of substituents.

The range of thiol nucleophiles that can be used is very broad, with alkyl, benzyl and aromatic thiols, as well as thioglycosides, peptides, thiobenzoic acids and even sodium hydrogen sulfide reacting successfully. Fascinatingly, sodium hydrogen sulfide allows preparation of diethynyl sulfides that are apparently relevant to interstellar chemistry – a claim you don’t come across every day in a methodology paper.

This metal-free reaction is remarkably selective and efficient, and with its excellent functional group tolerance has great potential in organic synthesis, materials science and chemical biology. While criticisms of atom-economy with respect to the reagent are valid in part, the 2-iodobenzoic acid byproduct can be recycled. Furthermore, although existing methods to make EBX reagents are practically a little troublesome, one-pot syntheses of sterically bulky variants have now emerged. These bench-stable, non-toxic, yet highly active reagents have seen a renaissance that is likely to continue for some time.

Karl Collins (@karlDcollins) is a research associate at the University of Münster, Germany, and blogs at A retrosynthetic life