Am I really a scientist?

Whether in a lab, an office or on a stage, we are no strangers to wrestling with self-identity

Citizen science projects are a high-impact way to engage people with real, scientific research. Anecdotally, untrained participants are not only lucky enough to learn about and contribute to science, but also experience increased feelings of confidence and empowerment, as well as feelings that science is ‘for them’. 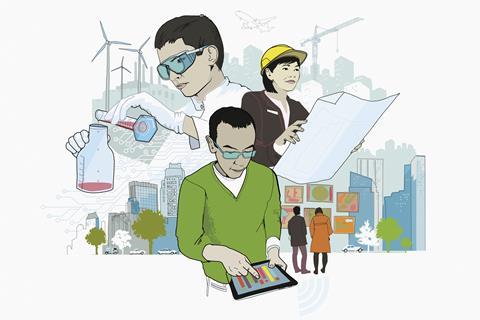 Which of these people would identify themselves as scientists?

It’s frustrating that despite citizen scientists making leaps and bounds in their scientific self-confidence, this is still one of the factors that new researchers at the start of their formal scientific journeys struggle with most. This particularly goes for students and researchers from minority and non-traditional backgrounds, who sometimes feel like they don’t fit into the monolithic lab environment. Many report either deliberate or unintentional exclusion leading them to experience the converse of the citizen scientists: decreased sense of belonging, and intrusive thoughts of not truly being a scientist, regardless of ability and expertise.

Looking wider and more objectively than this impostor syndrome, the idea of who is and isn’t a scientist is a constant source of argument. Positions range from the hyper-inclusive ‘all children are naturally scientists’, to ‘the word scientist (or something nominally similar) must be in your job title to be considered one’. Some students claim that they can’t be scientists yet – they have to get a job first – even if their work bears many similarities to an employed postdoc or industry researcher. My friends who have left bench science for editorial or science communication positions are sometimes the most conflicted. After dedicating years to meticulous training in research, they have left the lab, while still using many of their honed research skills every day. I can’t offer any advice beyond that if they want to be called a scientist, they’ve certainly earned it. How people perceive themselves has powerful effects on confidence and personality, and using one neat, descriptive word greatly simplifies the thinking.

If you’re wondering what all the fuss is about, try bringing up the concept of identifying as a scientist in a large group of science professionals: many will angrily reject the entire premise. Their idea is that constructing your identity as a scientist implies that the practice has to take up one’s entire life. It’s true that we as scientists live odd lives, in which we generally have to move around the country and get international experience in our early careers, often don’t have especially high job security, and regularly attend multiday conferences, and it’s not difficult to see where the anger stems from. Most of these activities largely exclude researchers who are parents or caregivers, or who have disabilities. This issue may be more to do with the word ‘identify’ than ‘scientist’ – it’s easy to suggest that a scientist is simply anyone who uses the scientific method. That phrase could apply just as readily to carefully optimising ingredients towards your favourite curry, as it does to coaxing a Suzuki reaction towards maximum yield.

I certainly identify as a scientist, and that’s partly because I also identify as a nerd. But I don’t end up feeling pigeonholed. I work in a very diverse role – some days I now wonder whether I’m actually an engineer, or a seriously untrained computer scientist.

I don’t see ‘scientist’ as overshadowing any other strong facets of identity. To quote Iranian-American biologist Maryam Zaringhalam, ‘I can’t divorce my identity as a scientist [from] my identity as a first gen woman’. And while the ‘scientist’ identity does not have to take up one’s entire life, that’s meaningless to someone who has had to craft their own entry into that world from a family that finds it completely alien.

The experience of being ‘other’ in any less-than-diverse lab might be mirrored by experiences of an analytical mind not fitting in with your family, birth town, and the kids you went to school with. Anyone from a non-traditional background can point to ways that the pursuit of science has changed their personality and their relationship to their roots. One of the biggest for me is my accent – usually a source of pride for a northerner! The myth of science as an idealistic meritocracy might lead to individual demographic factors being considered irrelevant, but to non-traditional scientists, these interactions are a necessary part of working in this field.

Ultimately, the debate over who can call themselves a scientist pops up every couple of years, and with no clear-cut definition of who is and isn’t, it’s essentially moot and irrelevant. The results we accomplish are more important. What matters is when we identify ourselves as scientists in public, where listeners may not know any scientists. We end up representing scientists as a whole, whether we would like to or not.

Since a large proportion of people expect scientists to always be old, white men with wild hair, perhaps more of us who don’t fit that profile should proudly identify as scientists wherever we can!