Nearly all chemistry depends on the strange fact that the crystals that grow out of a solution are often purer than the solution they grow from. In some ways a growing crystal discriminates against alien molecules that do not fit its lattice. 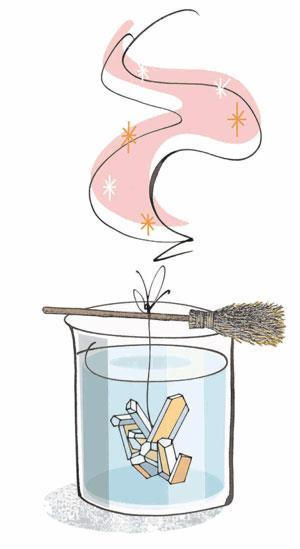 One of the very first examples of a chemical industry – the manufacture of alum as a mordant for dyeing fabric and tanning leather – depended entirely on cunning crystallisation. Alum is a double salt (there are many alums), but the traditional potassium aluminium sulfate KAl(SO4)2.12H2O crystallises nicely from water.  Ammonium was an important component too as K+ and NH4+ enter the crystal lattice indifferently and stale urine was a convenient source of ammonium. Over the centuries, many strange alum recipes were devised, each taking some aluminium-containing mineral, treating it cleverly, and crystallising a useful alum from the resulting solution. A horribly crude initial mixture could yield valuable crystals.

No single great chemist seems to have recognised and extolled the purifying power of crystallisation, yet it is one of the basic chemical skills. Even when hot, a good recrystallising solvent does not melt the substance you are trying to crystallise; but instead dissolves a lot of it. When you cool the solvent, that solubility declines and purer crystals emerge. You then filter them off and dissolve them in hot solvent once again. After a few cycles, the crystals will be pure enough to yield a believable formula.

However, to start crystals forming in the first place, you often have to ‘seed’ them and this is one of the blacker chemical arts. The ideal seed is a tiny little bit of solid crystal on which new growth can build. Alternatively, a bit of glass dust, got perhaps by scratching the wall of the solution flask with a glass rod, may do the trick and strong cooling may work too. A new compound of mine once refused to crystallise until I accidentally spilt some in the laboratory fridge – something seeded it, and my spillage crystallised! The great British chemist William Perkin was legendary at getting new compounds to crystallise. His students used to say that he had crystals of every substance in his beard – he merely had to shake it over the flask and the right one would fall in and seed the crystallisation.

It’s not just seeding that can be a mystery though, crystallisation has other black arts too. For example common salt, sodium chloride, usually forms cubic crystals. I was once told that a chemist at ICI found a way to make it crystallise as ‘hoppers’ – structured cubes of much lower density. Naïve consumers who bought their salt by the sackful, ie by volume and not by weight, could thus be made to pay more for it. The same trick is possibly used in some ‘low sodium’ salt sold to health conscious consumers.

Sometimes, as with alum, only a mixture with solvent makes good crystals. Sodium sulfate Na2SO4.10H2O, and sodium carbonate Na2CO3.10H2O have so much water in their crystals that they have been called ‘ice with ions’. And those beautiful blue crystals of copper sulfate, CuSO4.5H2O, that we all saw as children, only come out of aqueous solution.

This makes me wonder – what other molecules can act as ‘solvents of crystallisation’?  Ammonia is one – ‘ammines’ such as CuSO4.xNH3 are known with x = 1,2,4 and 5. I was once baffled by a compound with ‘acetonitrile of crystallisation’. Maybe other little molecules, such as CH3OH, HCN and CO2, can also help to make crystals. Indeed, some substances may need two different molecules of crystallisation – Na2SO4.H2O.0.5H2O2 is known. Further black crystal arts are clearly possible!