If you look at a list of the best-selling drugs in the world, you’ll notice many antibodies in its upper reaches. That’s partly because they’re costly, but also because they’re useful: antibodies, as blood-stable proteins with extraordinarily selective binding, can hit many targets that it’s difficult or impossible to address with small molecules. During the Covid-19 pandemic, they’ve had an unusual turn in the public spotlight as well. 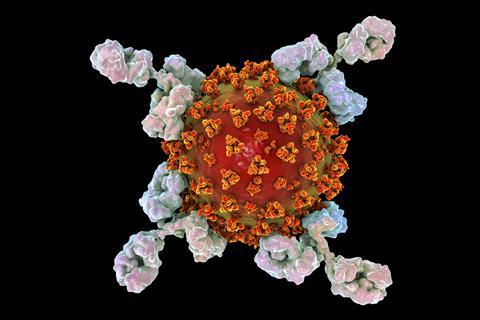 Antibodies, be they harvested from human plasma or reconstituted in the lab, could offer an effective treatment for Covid-19, but developing them and ensuring they work safely is a challenge

Some of that is through the idea of using ‘convalescent plasma’ as a therapy. As the name implies, that’s blood plasma from people who have recovered from coronavirus infections. That recovery was driven by their own immune systems raising neutralising antibodies – ones that bind to the virus in a way that keeps it from being able to infect cells and allows it to be targeted for destruction by blood leukocytes. Administering such antibodies to another infected patient could do a lot of good, in theory, since they should have the same neutralising effects once they’re transfused in. This technique has been used (often on an emergency basis) against infectious diseases for many decades.

Unfortunately, its success rate over that time is rather variable. If you take plasma from just one recovered patient, the antibody levels could be anywhere in a wide range, depending on their own immune response and how long it’s been since their recovery. For this reason, combining and pooling such plasma is a standard technique. But that averaged blend is still going to have a lot of other antibodies in it that won’t do a sick patient any good: there are the usual background circulating varieties that everyone has; plus some that target other infections entirely; and even those that are part of the response to the coronavirus itself but are non-neutralising, and so on. Indeed, the evidence we have so far indicates that while convalescent plasma might be beneficial in coronavirus patients, its effects are probably not very strong.

It would surely be better to give a dose of nothing but strong neutralising antibodies, and that’s exactly what is being investigated now. Earlier this year, several teams isolated potent candidates from the blood of coronavirus patients and adapted them to monoclonal production, using cell culture techniques to produce large quantities of pure antibodies. These ‘mAbs’ are in human clinical trials as single agents and as mixtures of two different antibodies to lower the chances of evasion by any mutant forms of the virus. We should have results shortly, but studies in animal models have looked promising. If these work in humans, they could be given directly to sick patients, and also to healthy people in high risk groups, whose treatment would be likely to provide some protection against getting infected in the first place.

This being real-world medical research, there are some potential problems. For example, it may take a substantial dose of these antibodies to be effective in a sick patient, which means that the companies developing them could face significant manufacturing challenges. The price of such a treatment will surely not be at the what-the-market-will-bear levels of existing antibody therapies, but it can never get as low as small molecule therapies (which are generally much easier to produce in quantity) or a vaccine (which could have similar manufacturing challenges but is given at a far lower dose).

That idea of using mAbs as a preventative treatment also comes with its own uncertainties: how long would such protection last? The new antibodies would probably be cleared relatively slowly from the blood, but they would eventually reach levels that were too low to be protective (not that we know what those levels are yet). And remember, a natural immune response leaves behind memory B cells that are active for years or even decades, ready to swing into action should a pathogen appear again. But a dose of extraneous antibodies will produce no such immunological memory, and once they’re gone – in days, weeks, or perhaps even months – they’re gone. Overall, though, mAbs could fill in the weeks and months before an eventual vaccine becomes available. Given the twists and turns that part of the story could take, we’ll probably be glad to have these monoclonal birds in the hand.