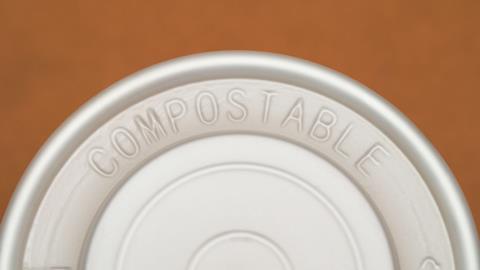 Testing the biodegradability of plastic through citizen science

Burying plastic in your garden doesn’t sound like the most eco-friendly approach to recycling… unless the plastic is compostable of course. Almost 10,000 citizen scientists in the UK have participated in a nationwide experiment investigating home compostable packaging by ‘gathering public opinion on compostable and biobased plastics, food waste strategies and home composting’.

The Big Compost Experiment started in late 2019 and recently published on its findings. For the first part of the experiment, 9701 participants filled in a survey designed to assess public attitudes towards biodegradable plastics and their behaviours around the materials. The second part of the experiment, completed by 902 people, encourages participants to place a few pieces of biodegradable plastic into their home compost and report back on how the material degrades over time.

The Big Compost Experiment was conceived by Danielle Purkiss with colleague Mark Miodownik (both from University College London’s Plastic Waste Innovation Hub). ‘We initially started it because at the time me and a few other researchers were seeing that anecdotally, there was an increase in this kind of new packaging material called compostable packaging,’ Purkiss says.

Purkiss and colleagues were interested to see the uptake of these new materials by manufacturers, in response to the global reporting and initiatives that emerged following the release of the Blue Planet II documentary series, which placed the topic of plastic pollution in the media spotlight.

One such initiative is the Plastics Pact Network, which is working towards solutions for a circular economy for plastics.

The Plastics Pact is ‘basically an initiative to try and get manufacturers to sign up to eliminating single use fossil fuel plastics,’ explains Purkiss. ‘And as an alternative, there’s a suggestion in that pact that we should be trying to switch to either reusable models of packaging or to compostable.’

The Big Compost Experiment aimed to engage citizen scientists to better understand how well some of these new ‘compostable’ packaging materials break down under home composting conditions.

Citizen science emerged as the right tool to answer the team’s research question. ‘It’s a type of data gathering and a type of involvement of the public that we just couldn’t replicate in a lab,’ says Purkiss. ‘The citizen science part is absolutely essential to the creation of this range of data.’

Of course, the experimental conditions were not as tightly controlled as they would normally be under laboratory conditions. ‘There are the complexities and chaos that’s associated with people interpreting things in their own homes, and carrying out experiments on their own, and also logging information on their own,’ says Purkiss. ‘But I think overall … the range of data and also the number of data points that we have over this past three years has meant that we’ve actually got a really interesting set of data which I think has a lot of value.’

One of the key findings of the experiment so far was that across different types of home composting systems, the majority of ‘biodegradable’ and ‘compostable’ plastics that were tested did not fully disintegrate.

Findings from the project have been regularly communicated to participants through the Big Compost Experiment website, and Purkiss believes that the data is already having an impact.

‘We’ve had lots of feedback from the public about this interesting stuff they’re seeing on the website, but also manufacturers are seeing some very interesting performances of their own materials,’ she says. ‘They’re suddenly being faced by a range of people’s own experiences with the materials they are making and it’s suddenly making them realise actually maybe they don’t know the performance of their products that well. Perhaps there are questions about materials that they’re being supplied, or that they’re buying, that they weren’t aware of before.’

For Purkiss and the team these types of interactions and impacts are part of the reason that the citizen science approach is so powerful. ‘This has been both active in an educational sense for the public, but also it’s been very active in promoting manufacturers to rethink and re-evaluate their packaging choices,’ she says.

UK readers can continue to participate in the Big Compost Experiment by visiting bigcompostexperiment.org.uk/