As we all know, a new drug candidate has to perform first and foremost in two areas: efficacy and safety. If it doesn’t, it isn’t going to go anywhere (or at least it really shouldn’t). But a lot more besides can stop it in its tracks - and you might be surprised by what constitutes a potentially lethal roadblock.

First off are some good old chemistry issues: can the compound be made, in large quantities, and have it come out exactly the same way every time? Most of the time, the answer here is ’yes’, thanks to the efforts of a lot of hard-working process chemists, but some projects are much more challenging than others. You have to consider the sources and suppliers of your starting materials and reagents. Cost of goods is also a consideration, although for a great compound it’s rarely a deal-breaker. Bigger questions are the availability and quality of those goods - will your suppliers still be around in a couple of years? And you have to think about the waste stream that you’ll be generating, what facilities you’ll need for production (and whether you should own them yourself), and how you’ll be able to make sure that every batch, at every stage, is what it’s supposed to be.

One of the most unnerving problems that can crop up here are polymorphs, different solid forms of your drug substance. Some rare compounds have only one form under normal conditions, but most of the time, you’ll find several. Or a dozen. Or two dozen crystal forms, hydrates, solvates, amorphous powders and who knows what. The problem is that in the drug industry you have to make the same one each time, and large-scale production methods have a way of producing a different polymorph to the one the folks back in the discovery labs were making. There are horror stories of whole programmes delayed for months (or longer) when a polymorph with a higher melting, or a far less soluble (and often therefore much less useful) polymorph, has suddenly appeared during scale-up. 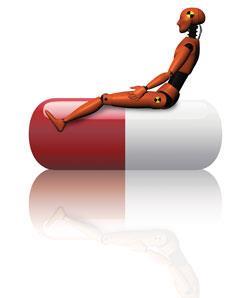 Then there’s stability. Once you’ve made all this drug substance, how will you store it? How well does it last in the solid state, and how does it hold up once it’s been formulated into pills? Will any special handling be needed in the supply chain? Surprises in this area are most unwelcome indeed, so extensive tests get run under all sorts of conditions (humidity, temperature extremes and fluctuations, exposure to sunlight and so on).

I managed to bring up the drug’s formulation in that last paragraph as if it were just another box to check, but that’s far from the truth. Finding the right formulation is actually one of the key steps for any drug candidate’s progress, and it can be a difficult one. All’s well if some standard procedure gives you the results you need, but, if the usual things don’t quite do it, there’s an extraordinarily long list of Other Things That Just Might Work waiting for you. Particle size, additives and excipients, co-crystals, tablets and capsules and gel-caps and coatings - a difficult compound can keep a lot of people occupied for a long time, not least because big changes here will be tied to every other part of the process. A new formulation will require a new look at blood levels, safety and efficacy, more stability studies, fresh attention to the manufacturing process and so on. The sooner you can sort this issue out, the better off you are.

After touring all these possible pitfalls, you may well wonder how any compounds make it through the process at all. (A cynic might chime in at this point to say not enough do these days.) But most of these issues are solvable, most of the time, with enough time, money and effort. The number of compounds abandoned during development because of stability, formulations or cost of goods is very small compared with the number that fail the tests mentioned back at the beginning: efficacy and safety. In comparison, those two are no respecters of hard work and determination. They’re the real enemies - give us a good old formulations problem any day compared with unexpected toxicity or a mistaken drug mechanism. No one who’s done this work would disagree.