Derek Lowe wonders where we'd be without the formulation chemists

Derek Lowe wonders where we’d be without the formulation chemists

My speciality is drug discovery, but we’d be in trouble if the pharmaceutical companies were staffed only with drug discoverers. Our work only starts a long and expensive process (and to be honest about it, we’re probably in charge of the shortest and cheapest part of it). We spend our time working on a lot of things that no one will likely have to care about again, but once we’ve found something interesting, a number of other groups get involved. One of these is the formulations department, who figure out how to deliver our new compounds.

So, how do you administer a new drug substance, anyway? A solution formulation will often serve in the first stages of development, so dissolve the compound in something, then. That sounds easy enough, but in what? You can almost always rule out plain water, unfortunately. Drug development organisations have been complaining for years that too many new drug candidates have terrible water solubility, and it’s hard to argue with them -’brick dust’ is practically a standard term of the art. Sometimes adjusting the pH of the solution is enough to do the trick, but there are obvious limits to that approach. 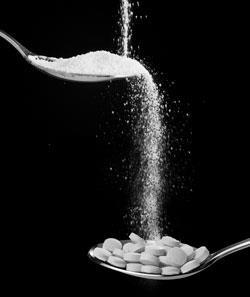 So you’ll often need something more vigorously solvating. The problem is, you can’t ask a test subject to drink the really powerful solvents - or expect them to survive drinking them. Even in marketed drugs, the working room can be small. The anticancer agent paclitaxel is a notorious example: a drug with such awful solubility problems that some patients can’t even tolerate the solvents it has to be dosed in.

And as in that case, the range of solution formulations becomes even narrower if the compound is going to be administered intravenously. The digestive system, after all, is used to handling a lot of unusual substances. But the inside of a vein is another matter: a delicate and rigorously controlled environment that has to be disturbed as little as possible lest serious (and immediate) consequences befall.

But solutions are (arguably) the easy part. Most of the time, we’re trying to make oral medications and bring colourful tablets to market. A huge number of variables influence how well a solid drug is absorbed, and depending on your outlook on life, you can regard this as either a curse or a blessing. The most obvious factor is the intrinsic solubility of the solid drug. By the time you consider salt forms, solvates, polymorphs, and particle size, you realise that you have to carefully specify which solid drug substance you’re talking about. Two different samples of what (chemically) is the same compound can behave as differently as salt and sand.

Figuring all this out is interesting, important, and difficult work. I only wish that I could report that the relations were better between the people who do it and the medicinal chemists. Not every company has a problem with such friction, but it happens often enough to be the subject of eye-rolling stories told by both sides. I’ve been in situations where everyone worked together cheerfully, but I’ve also seen examples where the two camps would barely talk to each other.

Some of this is due to lack of understanding - and some from lack of patience. Not all chemists appreciate the complexities of formulations work, and for these people, running into formulation problems seems needlessly complex. The amount of compound needed to solve these issues can cause bad feelings too, especially if a good scale-up route hasn’t been discovered yet.

From the other side, the formulators see so many difficult-to-handle compounds that they might assume that the chemists just don’t care if their drugs dissolve in anything or not. Nothing makes a downstream development group angrier than feeling as if someone’s casually handed over a box full of trouble. But the chemists may have barely been able to overcome the demands put on them for potency, selectivity, and patentability: whether or not the compound can be smoothly turned into micron-sized particles isn’t something that keeps them awake at night.

But it should have at least crossed their minds. The key to avoiding these fights is to make sure that no single group owns a particular set of problems. Everyone should realise what the issues are, and do what they can to avoid the rough spots. Not all of these can be dodged, and in the worst cases, some may not be possible to solve at all. Keeping everyone aware of the issues each team is faced with is probably the best we can do.