The financial markets can be a rollercoaster ride, writes Derek Lowe, so should chemists working in industry worry about the company share price?

The financial markets can be a rollercoaster ride, writes Derek Lowe, so should chemists working in industry worry about the company share price?

We chemists work in all sorts of environments - academia, industry (wherever they’ll have us, really). Each environment has its attractions and its problems, but whichever one you’re in, at some point, you’ll find yourself asking the question: ’How are we doing around here?’

Chemistry departments in academia change relatively slowly. Most people who follow academic science have a pretty good idea of how strong the various departments are, and for the most part those league tables change only slightly from year to year. Not always, though: a high-profile defection or two can move things around pretty dramatically. It can be as if someone put a big sign out in the front lawn, facing the main road, saying: Hey, this place is moving up in the world. (Of course, the sign can also read: Hold it, we’re suddenly in trouble over here.) 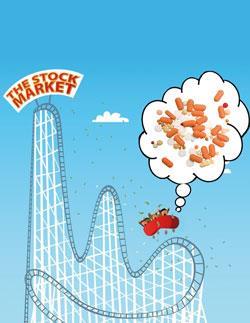 But the point is that those signboards don’t change daily, and they certainly don’t vary continually out where everyone can see them. For that experience, you need to work at a publicly traded company. Then you can leave a share price window open up in the corner of your computer screen, and keep score every minute of every working day. But is that a good idea?

If you’re a chemist with a large industrial firm, it’s not a much of an issue. Their shares tend to wander up and down rather slowly, often tracking the broader market. The drug industry is livelier; even the big companies can have their valuations kicked around by patent expirations or sudden news from the clinic. But if you really want to wear yourself out, try watching the share ticker when you work for a small outfit. That takes you from ’no drama at all’ to ’rather more drama than you probably wanted’.

That’s because most small biotech and pharma companies represent ’story’ shares - a single drug or project is the reason for the company to exist, and its performance therefore is almost exclusively what drives the share price. Or, more accurately, it’s what outside investors think about that project that counts: your company might report what looks to you like good data from the clinic, and you’re all ready to see that reflected in the share price, but - perversely - it goes down. For a drug that works, one that’s a step closer to approval, it goes down? That it can, because it all depends on what the investors were expecting to see.

Sometimes the shareholders have unreasonably high hopes (encouraged, at times, by some management teams), and sometimes they just don’t understand what they’re looking at, or at least not at first. To be fair, sometimes the people inside the company also have unrealistic ideas about how effective and well thought of their pet project is!

Even more disconcerting can be a look through the various share message boards. These range from fairly thoughtful to almost completely mindless. The latter, distressingly well populated, feature many people who seem to regard the movements of any given share as a titanic struggle between the good, decent people who own it and love it, and the evil manipulators who dare to say bad things because they want it to go down. This is not a useful view of the world, to put it mildly, but it’s definitely a popular one. Even the better share discussions can be a bit otherworldly for employees of a company, though, as you see what the world is like for those who have only press releases to go on.

But in the end, a constant focus on your company’s market gyrations is almost certainly not going to help you do your job. Remember, the company and the share price are not the same thing. You’ll spend too much time wondering why the share price is doing whatever it’s doing (or not doing what it’s supposed to) and less time on what you can actually do something about. You should know as much or more about your company’s prospects than random strangers trading its shares, right? Pay only slight attention, is my advice, so you can go and do things that no one’s heard about yet.