We are getting better at manipulating cells to grow into the tissues we need. Chemical factors are key, says Philip Ball

We are getting better at manipulating cells to grow into the tissues we need. Chemical factors are key, says Philip Ball

One of the key scientific messages from the cloning of Dolly the sheep in 1996 was that genetic information is just buried, and not lost, as embryonic cells differentiate into specific tissue types. Dolly was made from a mature tissue (somatic) cell cultured from the mammary gland of a ewe, which was fused with an oocyte - the precursor to an egg cell - from which the chromosomes had been removed. The cell began to grow into an embryo just as a fertilised egg does, under the guidance of the genes from the somatic cell, to create a clone of the donor ewe. That wouldn’t have been possible if a differentiated cell keeps only the genetic information it needs to do its specialised job.

Even before Dolly, there was reason to doubt that differentiation of cells deactivated some genes permanently. For example, the researchers at the Roslin Institute in Scotland who made Dolly had previously cloned sheep from embryonic cells a few weeks old, which had begun spontaneously to become specialised tissue-forming cells called fibroblasts. But that didn’t mean any cell could remain totipotent - able in principle to generate any tissue type - even into adulthood. Dolly proved that these genes could indeed be reawakened by rather simple means - in this case, merely by ’starving’ the cell of nutrients before fusion with the oocyte.

But restoring totipotency in cells was, even after Dolly, something of a black art - poorly understood in molecular terms. That was why hopes of tissue engineering of the sort needed to regrow neurones and nerve cells to combat neurodegenerative diseases or repair spinal-column injury relied largely on embryonic stem cells: cells harvested from early human embryos, which were still able to grow into several tissue types. As this generally required destroying the embryos, it was controversial for much the same reason as abortion. 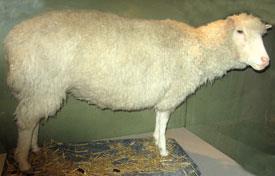 Dolly seemed to indicate that it shouldn’t be essential to depend on embryonic stem cells, since any cell has all the genes needed to grow into several tissue types (pluripotency). The problem was finding out how to switch on the ones that differentiation had silenced. That challenge was cracked in 2007 by two teams who discovered how to make so-called ’induced pluripotent stem’ (iPS) cells from differentiated fibroblast cells (which produce collagen) by inserting a handful of genes into them using viruses.1,2 The added genes encoded transcription factors: proteins that bind to DNA and control gene expression.

This means that pluripotency is made possible by the presence of the right molecules - far from being a property that emerges from some hidden mechanics of gene-network interactions, it is rather directly a chemical process.

Now Marius Wernig at the Stanford University school of medicine, US, one of the researchers involved in that breakthrough, and his co-workers have discovered something equally startling. They find that a trio of three other transcription factors will convert fibroblasts not to iPS cells but directly to a quite different cell type: neurones.3 The researchers sifted through 19 genes expressed specifically in neurones to identify what proved to be just three that were sufficient to bring about the change in cell lineage. The induced neurones will behave much like normal ones, generating the nerve impulses called action potentials and forming working synapses. In other words, we can make skin become brain; moulding a body suddenly appears to be a kind of sophisticated cookery. It is never too late, perhaps, for cells to have a career change.

What lies behind the specialisation of cells and its reversal? Genes may become silenced by chemical modification, in particular by affixing methyl groups to the DNA bases. This is an example of an epigenetic process, where changes in an organism’s phenotype are caused without modifying its genomic sequence (see Chemistry World, May 2008, p50).

There is now a global effort - the Human Epigenome Project - to identify the patterns and effects of DNA-methylation processes in the human genome.

But that’s just the start of the story. Ultimately the deactivation of genes that takes place during differentiation seems connected to the way genes are packaged in the DNA-protein composite called chromatin that constitutes the chromosomes. In other words, there are covalent, steric and supramolecular chemical factors that determine why cells acquire specific fates. Only by cracking that story, and not simply by reading genomes, will we start to understand what makes a human.