What’s in a smell? In nature, we’re quite familiar with odours being used as an enticement, but they can also be used as warnings. Termites are one of a few insects known to secrete defensive pheromones, especially terpenes, a supergroup of structurally diverse natural products. One large subgroup of diterpenes (consisting of four units of isoprene) are derived from the somewhat simple cembrene A - which is chemically primed to react with just about anything. One of its more obscure relatives is the wonderfully named rippertenol, which at first glance looks a mere hop-skip-and-jump from its parent. However, a more careful examination reveals a stray methyl group at C1, complicating the synthesis of an already tricky target.

Indeed, even though its structure was laid bare 30 years ago, it has stubbornly resisted any attempts at synthesis.1 Stereochemical diversifications from that typical of the family are the main problem, but any target bearing a medium ring is a challenge - one that Scott Snyder of Columbia University, New York, US, felt his team was up to.2

Rather than start with the seven-membered ring in place, Snyder’s ambitious scheme was a late stage ring expansion. While risky, this strategy avoids the stereochemical nightmare that the all-too-flexible medium ring can provide.

The synthesis begins with a rather neat literature synthesis of a cyclohexenone from 3-methylanisole in six steps, setting them well on the way. An alkylation followed by a diastereoselective conjugate addition then gave them a highly functionalised cyclohexanone, using century-old carbonyl chemistry as the lynchpin. The ketone was then put to work again, as a further acid-mediated alkylation with a simple alkyl chloride provided not only a second quaternary stereocentre, but also revealed the masked aldehyde, promoting Robinson annulation and dehydration to form the cyclopentene ring (figure 1). 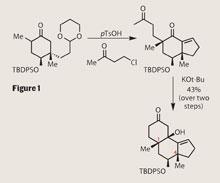 A second ring-forming aldol reaction was more awkward, though, requiring a quick scan of possible conditions to encourage formation of a further cyclohexane. They also needed a bit more effort to promote dehydration, forming a mesylate (a good leaving group) to encourage elimination.

This was, of course, worth the effort, as the product was a diene: seemingly perfectly set for a bit of Diels-Alder chemistry. However, scrutinising the partnership for this reaction reveals an electrochemical quandary. Usually a Diels-Alder reaction employs an electron-rich diene with an electron-poor dienophile. But in this case that bias is inverted, as the diene is conjugated to an electron-withdrawing ketone. This is actually a well-characterised variation on the classic conditions, known as an inverse electron demand Diels-Alder, allowing the group to use a simple ketal as the cycloaddition partner (figure 2).3

Methylenation of the free carbonyl and reduction of the resulting exocyclic alkene delivered the C12 methyl stereocentre, and allowed the group to remove the dioxane protecting group on the C10 carbonyl. They then set about their planned ring expansion chemistry, using the wonderful trimethylsilyldiazomethane (figure 3). Although it’s pricey, has to be well-cared for, and has some anger issues, this is nothing when compared to its far less stable parent, diazomethane. So tetchy is diazomethane that it requires its own glassware, carefully treated to remove any imperfections or ground-glass joints, which might encourage it to explode. My use of TMSCHN2 was to simply and easily convert carboxylic acids to their corresponding methyl esters, but Snyder’s is substantially more impressive.

The ring-expansion reaction selectively migrates the C11 group rather than C8, but this is actually a moot point, as the carbonyl is later reduced completely, negating the selectivity. More importantly, it returns a modest but useful yield, along with returned starting material. Interestingly, the group had to use very specific conditions to prevent formation of an eight-membered ring analogue - proving that the carbonyl group becomes even more accessible in the initial product.

After radical reduction of the ketone and removal of the remaining protecting group, the team was done, returning the target in an impressive 19 steps, after 31 years of dead ends.