In a famous essay comparing the Russian writers Ivan Turgenev and Leo Tolstoy, the philosopher Isaiah Berlin quotes a mysterious phrase by the Greek poet Archilocus: ‘The fox knows many things; the hedgehog knows one big thing’. Berlin thus divides writers into those who follow a single idea doggedly and those who cast their nets more widely, but perhaps with less depth. Among the foxes of chemical history is William Crookes, the great and controversial Victorian polymath. 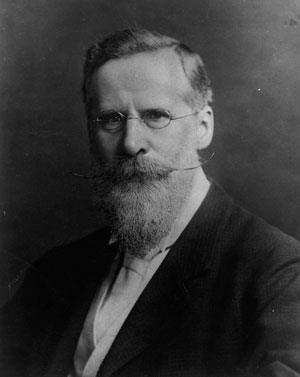 Crookes was the son of a successful Regent Street tailor. His wealthy father got him interested in photography · building him a basement lab in the family house – which eventually led Crookes to attend a course at the new Royal College of Chemistry where the charismatic August Hofmann was attracting some of the brightest young students.

He soon became Hofmann’s assistant and looked after some of the new recruits, including the young William Perkin. He also made many other friends, including Charles Wheatstone, George Stokes and Michael Faraday. Their influence ensured that, despite his mentor’s affinity for organic chemistry, Crookes own interests remained rather more ‘physical’.

Crookes pioneered scientific photography, which he realised allowed scientists to observe phenomena invisible to the naked eye. He even took photographs of flame spectra several years before Gustav Kirchhoff and Robert Bunsen, although he did not realise the significance of his results. But after attending a Royal Institution discourse that hinted at Bunsen’s spectroscopic discovery of rubidium, Crookes set his heart on an element of his own.

He took brief teaching posts in Oxford and in Chester and began to edit the London Photographical Society (LPS) journal, but then had a life-changing idea: he would start The Chemical News, a cheap weekly pamphlet that reported the latest chemical developments. He was soon sacked by the LPS, but his brainchild gradually took off.

Meanwhile, in his home laboratory he continued his hunt for a new element in every mineral sample he could lay his hands on, searching methodically for unclaimed spectroscopic lines. Finally, in samples from which he had isolated selenium for Hofmann, amid the expected lines of selenium, sodium and lithium, he saw a bright green emission – a new element that he named thallium.

Over the next 10 years, Crookes worked against ferocious competition from the French chemist Claude-August Lamy to measure thallium’s atomic weight. To minimise the air’s buoyancy effect, he slowly evacuated the balance chamber with a Sprengel pump, testing the vacuum with an electrical discharge. He eventually obtained a weight that would stand unchanged for 40 years. But to his surprise, the measurements depended on the temperature · hotter objects seemed lighter than cooler ones.

With the help of his brilliant assistant Charles Gimingham, Crookes developed ever more sensitive ways of weighing tiny objects, balancing slivers of mica or pith balls on glass fibres suspended in an evacuated bulb. These delicate balances moved when exposed to light; was the light exerting a pressure? His proposal had a mixed reception at the Royal Society, forcing him back to the lab.

With Gimingham he developed a ‘light mill’ or radiometer – four vanes of foil, the faces black and white, suspended from a slender glass cross on the tip of a needle. Illuminated, the vanes would spin madly, ‘proving’ the hypothesis. It was a deliciously sensitive instrument that allowed very delicate measurements of light intensity. The explanation, however, was wrong. Osborne Reynolds in Manchester showed that the speed of the vanes depended on gas pressure in the bulb, using James Clerk Maxwell’s kinetic theory to account for the motion. Crookes quietly and reluctantly conceded.

But he was now focusing on discharges in evacuated bulbs. Copying experiments by Faraday and Julius Plücker, Crookes used Gimingham’s new pump · several Sprengel pumps arranged in parallel – to move to ever lower pressures. Mysterious glows inside the tubes pointed to a motion of particles and Crookes observed a dark region that would come to bear his name. 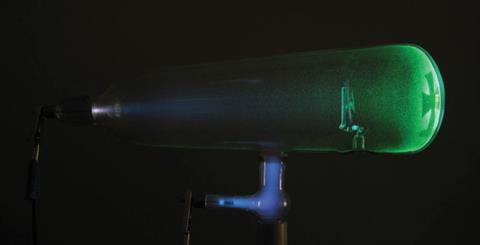 Never a shrinking violet, Crookes presented spectacular demonstrations of ‘his’ tubes. With a metal cross inside the tube, a sharp shadow could be seen on the glowing walls, proving that the ‘rays’ travelled in straight lines from the cathode. Many of these Crookes’ tubes can still be found in schools today, and I remember their jaw-dropping wonder when I saw them as a teenager in a darkened Nairobi classroom.

Although Crookes’ claim to have discovered a ‘fourth state of matter’ was only half right, his experiments pushed discharge phenomena firmly up the agenda of physics. Wilhelm Röntgen would first observe x-rays with Crookes’ tubes, and Joseph Thomson would identify the electron, beginning subatomic studies that would eventually give us Radar and television.

But Crookes’ interests took him in other, interesting directions. His punning motto ‘Ubi Crookes, ibi lux’ was singularly apposite. He made light bulbs with carbon filaments (ironically Gimingham left to work for Swan and Edison). His spectroscopy of the rare earths helped lay to rest the controversies that had dogged that almost inseparable group of elements for much of the century. And in his later years, Crookes developed formulations of glass to protect factory workers’ eyes from the glare of foundries and glassworks, inventions echoed today in the didymium specs used by glassblowers. The Chemical News remained required reading for chemists until his death in 1919.

So if Crookes was a man of many parts, which are you: hedgehog or fox?