If there was ever an ideal time for the International Year of Crystallography, you’d have thought it would be 2013. 100 years ago William Bragg and his son Lawrence first showed that the pattern of x-rays reflected from a crystal encodes the spatial coordinates of its constituent atoms. And 60 years ago the fruits of this discovery were used by James Watson and Francis Crick to deduce the molecular structure of DNA.

But who know how these decisions work? 2013 is instead the United Nations International Year of Water Cooperation (timely but optimistic, as events have proved), and crystallography has to wait until next year. But one can justify that too: it was in 1914 that Max von Laue was awarded the Nobel prize in physics for the discovery of x-ray diffraction by crystals. For that matter, 2015 is also an option, since that’s the centenary of the Braggs’ Nobel for developing Laue’s discovery into what is surely the most important technique for atomic-scale structure determination in all of science. These consecutive awards are themselves testament to the immediate and profound impact of crystallography. The UN claims, with only a little poetic licence, that no fewer than 28 Nobel prizes have now been awarded to scientists working with the technique. Certainly, without it we could hardly have known what we now know about molecular biology, high-temperature superconductivity or geophysics, among other things. 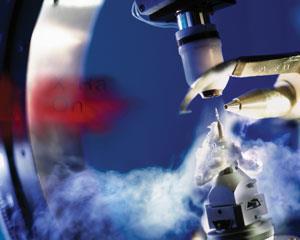 Indeed, what is perhaps most striking about x-ray crystallography is that in 100 years of existence its significance has only increased. That’s remarkable for a method developed before the maturity of quantum theory and genetics (and that touches on both of these disciplines). It was classic ‘small science’, depending on hand-crafted apparatus rigged up by and for the Braggs –  not to mention Lawrence’s reliance on the goodwill of the University of Cambridge mineralogy demonstrator, who lent him a diamond for their experiments against the strict instructions of the professor of mineralogy.

Indeed, when he became head of the Cavendish Laboratory in Cambridge, Lawrence nurtured an interest in crystallography specifically because he saw it as a field in which the prestigious yet modest lab could compete on the world stage without the resources then beginning to flow into the big physics of particle colliders. With Watson and Crick that decision paid off, although Bragg famously banned the brash young pair from working on DNA after one of their early models was shown to be wrong. (Bragg’s fractious interactions with Crick, who seemed to feel he knew more about x-ray crystallography than Bragg himself, scarcely helped.)

The irony is that big physics is now providing a bounty for crystallography, in the form of synchrotron sources of x-rays.

These super-bright beams enable structure determination of ever smaller samples, and shorten data-collection times to resolve ultrafast processes. Free-electron lasers are even brighter by orders of magnitude, offering power densities of more than 1016 W/cm2. That brightness, coupled with pulses so short that a diffraction pattern can be collected before the sample falls apart under the intense radiation, means single-molecule ‘crystallography’ starts to look feasible1 – nanocrystals2 and individual giant viruses3 have already been studied this way.

At the other end of the scale, synchrotron sources have performed diffraction on the proteins of living animals, resolving conformational changes in vivo.4 Meanwhile, advances in computation make it possible to study systems of ever greater complexity, from entire multimolecular biological assemblies5 to inorganic materials of unguessed structural elaboration.6

The sceptic might ask what, with all this happening already, an International Year of Crystallography will bring to the party. An immediate answer is the launch of a new open-access journal, IUCrJ, by the International Union of Crystallography (IUCr). But perhaps it is the truly cross-disciplinary nature of this field that makes it a particularly apt focus for the UN Educational, Scientific and Cultural Organization (Unesco) to further its agenda of fostering cooperation between nations and in particular to enhance the visibility and participation of less developed countries. The aesthetic dimensions of crystal structure also make it a good vehicle for promoting interactions between the sciences and the arts.

And however much it remains a cutting-edge technique, crystallography is at root simple enough for anyone to understand and even to conduct, which is why it provides educational opportunities; the IUCr plans to visit schools in Africa, South America and Asia during 2014. It should be an eventful year.