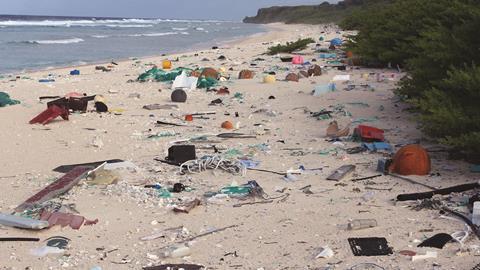 The picture above this article is jaw-dropping: a sandy beach stretching around an uninhabited smidge of land in the Pacific Ocean called Henderson Island. It should have been beautiful – but the remote shoreline of this World Heritage Site was littered with every conceivable type of plastic waste, from bottles and netting to buoys and crates.

The photo came from an environmental survey that found up to 672 plastic items per square metre on the island’s beaches,1 the highest reported density of plastic debris anywhere in the world. Along one 10-metre stretch of beach, ocean currents brought in dozens, sometimes hundreds, of new items every day. It is a shocking testament to our ability to despoil the planet.

There’s no doubt that plastics have made our lives safer and easier over the past half-century. But their durability and ubiquity brings a huge cost to the environment. Indeed, the Henderson Island study only tells part of the story: it did not tally the tiny fragments known as microplastics (see Chemistry World, May 2016, p54), which can sponge organic pollutants from the sea and deliver the toxic load into anything that consumes them.

The survey picked up widespread media coverage, sparking cries of despair and calls to action. Largely absent, though, was any discussion of the vital role that science and technology must play in solving the world’s plastic pollution problem.

As the Ellen MacArthur Foundation reported last year, the environmental toll of plastics is poised to balloon in the coming decades (see Chemistry World, May 2016, p35). The world produces roughly 320 million tonnes of the stuff every year, and more than 40% of it is destined to become single-use packaging. Some of this plastic is clearly superfluous, a blatant waste of the resources and energy used to make it.

But cutting out unnecessary plastic is only the first step. The European Union recycled less than one-third of its plastic waste in 2014, with the remainder either landfilled or burned as fuel. Chemists can help to change this by designing materials that are more amenable to recycling and developing processes that make better use of the plastics we throw away.

When consumers assiduously collect their plastic waste for recycling, they may have gathered together more than a dozen different polymers. Chemistry already helps to turn this jumble into distinct waste streams, delivering relatively pure polymers that can be turned back into products. Infra-red scanners can distinguish between different types of plastic on a conveyor belt and trigger sorting machines to separate fragments measuring just millimetres across. In the past few years, advanced systems have begun to distinguish between different physical forms of the same polymer, or even extract particular plastics from mixed household waste.

Sorting is not always possible, however, and in these cases the plastic waste can instead be broken down into monomers that are then used to make fresh plastic. Recycling Technologies in Swindon, UK, for example, uses thermal cracking to depolymerize mixed plastics, and last year opened a pilot plant that can process 7000 tonnes of plastic per year.

Plastic packaging that incorporates several different materials poses a particularly tough challenge. Take plastic-aluminium laminates: more than 160,000 tonnes of these materials are used in the UK every year, typically to keep food fresh. They tend to reduce the weight of packaging, making them less resource-intensive than alternatives, but they are fiendishly difficult to recycle. In 2015, Enval, a spin-out from the University of Cambridge, launched the first commercial-scale plant to tackle this laminated waste. Their process uses microwave pyrolysis to strip away the aluminium and turn the plastics into a mix of hydrocarbons, which can be used as fuel or feedstock.

Innovations like these are springing from universities and start-ups around the world, but they can only thrive if the processes make good business sense. That requires policymakers to create the right regulatory environment. For example, the UK’s landfill tax has successfully encouraged local authorities to reduce the amount of waste they landfill and increase recycling. Other countries, like Italy, have shown that a direct charge to consumers, often dubbed ‘pay as you throw’, can reduce mixed waste volumes and boost recycling streams. Even simple policies like charging for plastic bags can make people think twice before using unnecessary plastic.

Further progress may require governments to shift some of the waste management burden back to the companies that make and supply the original products. When businesses are responsible for products throughout their lifetimes – even after their primary use had ended – it acts as a strong incentive to minimise waste and make materials easier to recycle. This form of ‘extended producer responsibility’ is already applied to cars in the European Union, where manufacturers have to take back vehicles at the end of their lives and re-use or recycle at least 85% of the materials within. It provides a clear economic case to improve designs, make better materials choices and invest in recycling technologies.

We need to treat unwanted plastic as a resource rather than worthless rubbish and find ways to extract more value from these materials. Tapping into that resource requires a concerted effort from researchers, plastics manufacturers, product designers and policymakers. Only then can we ensure that shameful scenes like Henderson Island’s vandalised beaches are consigned to the dustbin of history.