Dead in the water

A healthy sense of hydrophobia is a useful trait in the plant, says Chemjobber

‘Water is an organic chemist’s enemy,’ someone once said to me. This is a gross generalisation, but one with some truth. Water can certainly be a bad actor. Any undergraduate who is unlucky enough to try making a Grignard reagent in wet diethyl ether can tell you that. No amount of angrily grinding the magnesium with a glass stirring rod will initiate the famously water-sensitive reaction in water-laden solvent. 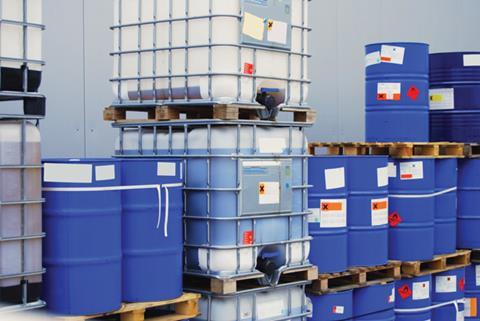 A relative lack of worrying about dry solvents is one advantage conferred on the process chemist. No need for tedious (and dangerous) stills that require constant maintenance; or bulky, expensive solvent purification systems. Just get some of the solvent from the plant. It is no good developing a process in fancy high-grade solvent, only to find that it doesn’t work in the (much cheaper) technical-grade solvent that the bosses want to use. Best to pick up a couple of jugs of the stuff from the plant, and see how it goes.

But how much water is in your solvent? How can you tell? You can run an NMR and see how big the water peak is, but that’s not very quantitative. That’s where a great friend of the process chemist comes in, the automatic Karl Fischer titrator. It is helpful little machine, with an electrochemical probe and a mixture of iodine, imidazole and sulfur dioxide. When the instrument is ready, you add a known amount of solvent to the chamber and the instrument slowly begins its titration. After a few minutes of watching the brown titrant disappear into the clear methanol–solvent mixture while the stirrer bar rattles, it reaches the equivalence point. The instrument beeps to tell you it’s finished and that your solvent contains 300ppm water. Not completely water-free, but dry enough for most purposes.

These numbers are handy for setting specifications for future solvent deliveries to the plant. Know that your reaction can’t handle more than 2000ppm water in the solvent? When a drum of isopropyl alcohol tests at 7500ppm, you can tell the folks in the warehouse to load it back on the delivery truck, because it’s not going into the reactor.

Ensuring solvents are dry isn’t the end of potential hydrophobia, though. Reactors can be wet because someone washed them out and forgot to dry them properly, leaving a big puddle in the bottom. If someone decides to charge 100kg of precious, water-sensitive reagent on top of that puddle, it’s not reagent any more, it’s waste. For a water-sensitive reaction, connecting the reactor to a vacuum pump and turning on the heated jacket may be enough to evaporate the water within the system.

But there are odd little nooks and crannies in a reactor that can hide a litre or two of water. Got a horizontal pipe connected to your reactor? It’s a great place for a little (or big) puddle of water to stand, and there is no easy way to know it’s there. You can’t see into the reactor easily, and you can’t see through pipes. These ‘dead legs’ can be troublesome and unexpected. Ideally, they are designed to be separately drained or easily disassembled.

In the worst cases, even the reactor itself can work against you. While leaks from water-cooled jackets and condensers are rare, they can happen. The consequences of such water leaks can be disastrous from a product quality perspective, if not a worker safety perspective. Leaks from those systems can be prevented with maintenance and detected by pressure testing.

Even the water in the air can foil your plans. I once had the chance to work on a product that had a terrible propensity to hydrolyse itself back to starting material in the presence of acid. Of course, when the required reagent for the transformation was exposed to water, it would generate stoichiometric amounts of acid. We had managed to crystallise the product in toluene, isolate the material from the reactor, load it into the dryer as a wetcake and start the drying process. While the material itself was free of solvent, I didn’t realise that some of the reagent was still on the wetcake, primed to create acid. When the dryer was opened on a rainy day in a facility that was more or less open to the air, the reagent hydrolysed itself in the presence of all of that humidity. In an instant, a great choking cloud of acid formed and enough of the product reverted to starting material that the batch was ruined, and my week along with it.

While that first load of product was ruined, we had more wetcake to quench. Back into the reactor it went, along with fresh toluene. It was slowly transferred from one reactor to another, full of a chilled solution of potassium carbonate in many litres of water. After the base wash, the product was crystallised and dried without incident. When it’s not being an enemy, water can be a process chemist’s friend.

Chemjobber is a process chemist and blogger based in the US