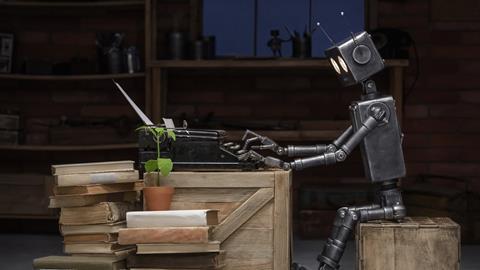 Death of the author

The first machine-generated book in chemistry is here. But is it any good? And what future does it herald?

April heralded the publication of the first machine-generated book in chemistry. Published by Springer, written by Beta Writer, and unsullied by human hand, it’s a summary of research on lithium-ion batteries based on a few hundred research papers published on the topic by Springer from 2016 to 2018.

It’s not a good read. It’s clear from the first paragraph of the introduction (250 words long, 18 references) that reader enjoyment has been sublimated to the writer’s determination to spew its newly learnt knowledge. But, perhaps, all authors suffer from this from time to time.

Beta Writer has no agency, no self-indulgent itch to scratch, no desire, ambition or inherent bias

As a former literary student, it’s impossible for me not to draw parallels with Roland Barthes famous essay Death of the Author, in which Barthes argues that ‘all text is a tissue of quotations’ and that the author must be severed from the text lest our knowledge of the former pollute our understanding and impoverish our interpretation of the latter. It gets better - Barthes put forward the concept of a ‘scriptor’: a writer that recombines pre-existing texts, is incapable of imbuing the finished text with meaning, and doesn’t exist before or beyond the text it creates. Nevertheless, the reader may still hold the image of the author in mind as they consume the text. But does Beta Writer have any authority?

Unlike the author of this editorial, Beta Writer has no agency, no self-indulgent itch to scratch, no desire, ambition or inherent bias. It simply ingests, selects and orders the starting material to then produce the new text using a ‘similarity-based clustering routine’. See, simple.

Beta Writer gives us something akin to double-blind editing in that the parties involved can neither influence each other nor the outcome. The output can only be as good as the feeder material (and it’s here that bias can be introduced to the process) but the whole could be greater than the sum of its parts. Machines can expose cross-corpora patterns, inconsistencies and contradictions with a ruthless energy no human can match.

We’ve been using machine learning and big-data wrangling for some time to inform novel human outputs. Beta Writer is taking on the task of making novel outputs from human-made information. Can technology like Beta Writer evolve from summarising the known to creating the new? It’s the potential for this to get out of control that prompted the OpenAI team behind GPT-2 – a highly advanced text generation algorithm – to withhold the code that makes the magic happen. Though, as Marcus du Sautoy commented in the Financial Times, ‘whipping up a fear of such weapons-grade writing tools was more about hype than saving humanity from an onslaught of yet more false news stories.’

Machine learning is already identifying compounds with desirable characteristics, predicting reaction outcomes, developing forensic models, screening molecules – a few examples from a growing list. These assistive and predictive technologies have been revolutionising science for years and significantly outperform humans in the narrow range of tasks we ask of them. But Nicholas Bailey’s comment for Chemistry World two years ago stills holds true today: ‘a machine that can walk into a bar and demand your clothes, your boots, and your motorcycle is a long way off: and if we did create it, that’s all it would be able to do.’

So, for now, we are still enjoying the art of the possible but real-world applications and concrete investment decisions are increasingly founded on the outputs of learning machines. Springer frames Beta Writer’s book as an exploration of ‘future ways of informing researchers and professionals’, rather than labelling it as the finished product it clearly hopes to one day create. It exists to ‘highlight the current status and remaining boundaries of machine-generated content’ and hasn’t been manually edited so all its algorithmic imperfections are laid bare. No doubt another machine can learn how to edit, polish and roll things in glitter. But, until then, you’ve got me.