There’s still plenty of room at the bottom

If nanoarchitectonics reaches its full potential, we could precisely build any material structure 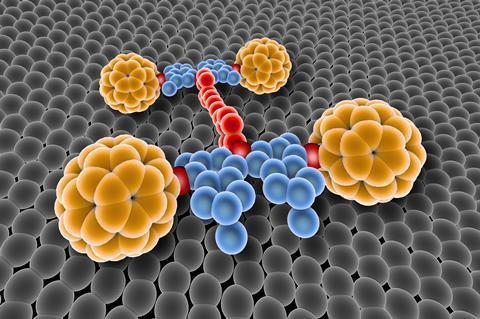 In a lecture at the American Physical Society in 1959 titled ‘There’s Plenty of Room at the Bottom’, Richard Feynman argued that huge possibilities come from working in the world of molecules and atoms. He dreamed of ultra-small computers, cars running under a microscope, and medical machines working in our body.

These dreams are now coming true. In 2017, we had the first World Nanocar Race in Toulouse, France. Six teams from around the world manipulated nanometre-size cars to run on a metal surface under a scanning tunnelling microscope. A nanocar is 2 billion times smaller than a usual car, corresponding to the size difference between a rice grain and the Earth. Feynman only imagined cars 4000 times smaller than normal. However, few of the nanocars resembled cars, and none were powered by their own motors. There’s still plenty of room for improvement.

The next step in nanotechnology is to develop nanoscale objects into functional materials. For this, we need nanoarchitectonics – a concept proposed by Masakazu Aono at an international conference in Tsukuba, Japan in 2000. The term nanoarchitectonics refers to the discipline (‘nics’) of architecture in the nanoscale. The aim is to architect materials with precise structures, designed to give high levels of performance, from nanoscale units such as atoms, molecules and nanomaterials. It is a nanoscale-version of building construction or machine manufacturing.

For this grand challenge, contributions from many scientific disciplines are necessary

Several research fields have developed initial forms of bottom-up architecture, by which the self-assembly of component molecules produces functional materials. The formation of structures through the self-assembly of molecules and specific molecular recognition processes is currently a hot topic in supramolecular chemistry. In biochemistry, DNA origami technology enables us to fabricate well-designed structures through complementarily base-pairing sequence-defined DNA strands. These approaches are based on simple molecular interactions between limited components. Unlike these traditional approaches, nanoarchitectonics aims to universally architect materials structures including more complicated (often asymmetric and hierarchical) motifs from multiple components beyond well-known self-assembly and related strategies.

For this grand challenge, contributions from many scientific disciplines such as nanotechnology, supramolecular chemistry, material science and biotechnology are necessary. Connecting techniques between different sciences will be key. Atomic and molecular manipulation, organic chemical reactions, self-assembly and self-organisation, nano- and micro- fabrication, materials processes and bio-related techniques are just some of the tools available – and they are already starting to be combined.

For example, site-specific chemical reactions have been achieved through molecular manipulation by nanotechnology processes, using a nanoscale tip to move a molecule into a desirable position for a reaction to occur. The hierarchical assembly of biomolecular motors with other materials such as assembled polymer layers has led to successful energy-piece production from a proton gradient. The regulation of atom-assembling structures at a tiny gap between electrodes has produced brain-like device outputs such as memorising, forgetting and learning. The operation of these atomic devices has even been examined in experiments in space; their high resistance to space radiation means the devices may prove useful in future extra-terrestrial missions.

Nanoarchitectonics can also learn lots from living creatures. A cell is effectively a functional factory. In living cells, unit molecules spontaneously build highly functional systems with complicated hierarchical organisations from many different types of component. These molecules have their own tasks and roles, and work together under nanoscale uncertainties such as thermal fluctuations. Beyond summation of individual interactions, effects and interactions play in harmony to give sophisticated functions. These biological systems are the ultimate models of products of nanoarchitectonics, as seen in the challenges of organising nanomaterials to enable artificial photosynthesis.

Nanoarchitectonics is not totally new. But by framing it as a new concept and declaring our interest in it, it’s easier for us to attract the funding and expertise that we need to take it to the next step. Just look at the Nanotechnology Initiative launched in the US in 2000, which greatly promoted nanoscience research activities worldwide. The projects funded by the Initiative opened the way to understanding nano-worlds. Now, nanoarchitectonics can enable us to produce useful materials from these nano-worlds.