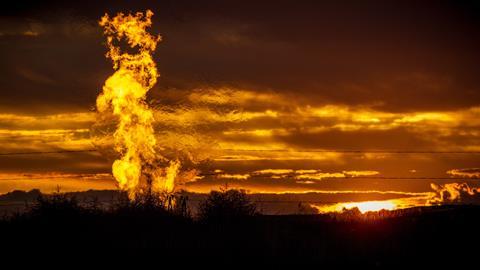 I’ve never seen a big gas flare up close. Anyone who has, though, could never forget its fearsome roar, like standing next to a jet engine running at full tilt. Then there’s the bludgeoning waves of heat, the intense brightness of the flame and the fine mist of oily droplets that drift from it. All over the world, thousands of these gas flares burn through about 150 billion m3 of gas each year.

Oil fields often contain a lot of natural gas, but a drilling site might be too remote, or the gas reserves too limited, to make it worth building a pipeline to transport the gas for sale. Instead, the cheapest way to deal with this ‘stranded gas’ is to set fire to it. This is not only a wanton waste of natural resources, it also emits more than 300 million tons of CO2 into the atmosphere every year, accounting for about 1% of anthropogenic emissions.

The World Bank’s ‘Zero Routine Flaring by 2030’ initiative aims to persuade governments and oil companies to eliminate flaring and in recent years it has begun to gain serious momentum. Last year, for example, the US Bureau of Land Management announced new regulations that require oil and gas companies operating on public land to phase out flaring.

Now, President Trump’s administration is – surprise, surprise – trying to derail those regulations. In early October, its attempt to delay the rule’s implementation until 2019 was blocked by a federal judge. But the administration insists it will seek other ways to stymie the rule, arguing that it is too burdensome for industry.

On climate grounds alone, that is willfully perverse. Yet it also ignores the huge opportunities offered by burgeoning technologies that use clever chemistry to turn stranded gas into a variety of valuable products.

One way to make use of stranded gas is to convert it into liquid fuels, which are often easier to transport and use locally. Methane goes through a steam reformer to make a mixture of carbon monoxide and hydrogen called syngas, which is then converted into longer hydrocarbons through the Fischer–Tropsch (FT) process. This technology has been around for almost a century, but conventional FT plants need to produce at least 30,000 barrels per day to be economically viable, so they are not suitable to process modest reserves of stranded gas.

But several companies have developed small-scale gas-to-liquids processes that are a perfect fit. Velocys, based in Houston, Texas, makes a microchannel FT reactor that is profitable at production volumes as low as 1400 barrels per day. The reactors are 5m long, and boast millimetre-wide microchannels that dissipate heat more rapidly than a conventional FT reactor. This allows Velocys to pack the channels with a much more active cobalt-based nanoparticle catalyst, boosting the system’s efficiency.

In June, Velocys’ reactors started producing waxes, diesel and naphtha at a commercial plant in Oklahoma City. Those reactors feed on methane from a landfill site, but the technology could also tackle stranded gas at remote oil wells.

CompactGTL, based in London, UK, has demonstrated a similar FT reactor in Brazil that turns stranded gas into synthetic crude, and is planning a commercial plant in Kazakhstan. And GasTechno in Walloon Lake, Michigan, uses an alternative approach to turn methane directly into methanol, deploying its first commercial-scale plant last year. One of the key advantages of these systems is that they are modular – additional reactors can easily be added if gas supplies increase, and even moved to other wells when they dwindle.

A slew of other technologies are in development. For example, Pallavi Chitta at the University of Utah is working on a molybdenum-zeolite catalyst that converts methane into benzene. Chitta now has funding from Alberta Innovates, a Canadian funding agency, to take the process to the pre-pilot stage by mid-2019.

In May, Jeroen van Bokhoven at the Paul Scherrer Institute in Switzerland reported that a copper-zeolite catalyst could produce methanol from streams of methane and water. And in September, Xin Tu at the University of Liverpool unveiled a plasma reactor that could couple methane and CO2 at room temperature and pressure to form products such as acetic acid.

These are just a smattering of the chemical reactions – and innovative reactors – that could help to curb flaring. One of the major challenges that these technologies will face, however, is raising the capital needed to fund scale-up work and ultimately produce commercial demonstration units. Flaring reduction regulations in the US could nudge companies to invest in these technologies, spurring wider deployment.

Meanwhile, other countries are taking the World Bank initiative seriously. In Nigeria, which is the seventh-largest gas flarer in the world, gas flaring has caused huge damage to human health and the environment in the Niger Delta. Earlier this year, it committed to end routine gas flaring by 2020, and signed an agreement in August that will see stranded gas liquefied and transported to industrial users around the country.

The US government should halt its fight to enable flaring. Instead, it must seize the opportunity to reduce the country’s greenhouse gas emissions and start turning a wasted resource into useful products.