In his final column, Mark Peplow gives his verdict on careers, collaboration and public engagement

This is the last of my Critical Point columns for Chemistry World. You’ll still see my byline in the magazine from time to time, in one-off opinion pieces or reportage, but for now I’m saying au revoir. 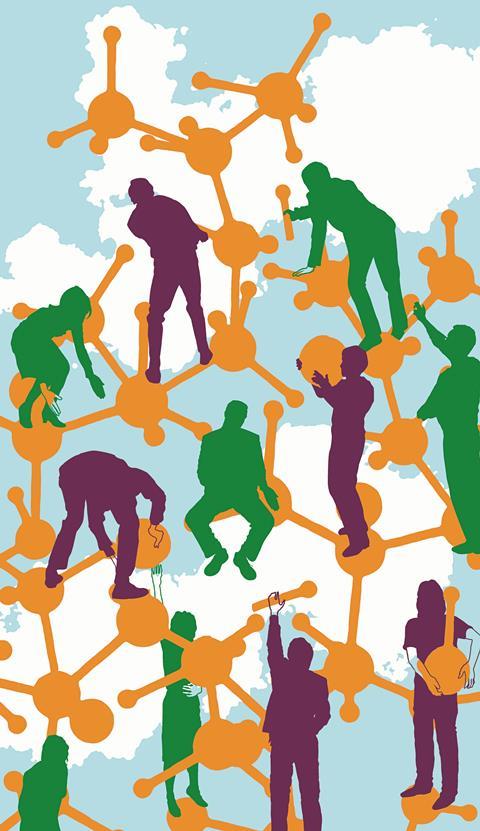 Diversity, unity and understanding are the key strands of chemistry’s future

So it seems like a good time to reflect on the past six years of sounding off about the chemical sciences. In almost 70 columns I’ve covered topics ranging from vulnerable global helium supplies to the dark side of chlorinated solvents. And there are several themes I’ve returned to again and again, because I believe they are fundamental to the vitality of chemistry.

The first is about how chemists present their subject to the wider world, and how that shapes public attitudes to chemistry. The second concerns chemistry as a career, or as the foundation for a panoply of other jobs. And the third is about science as a collaboration, one that can unite people across disciplinary and national boundaries.

There have been significant developments in all of these areas during my stint at the Critical Point coalface. But have they been changes for the better – and what are the prospects for the future?

Many chemists see outreach as a way to inspire the next generation of chemists. It’s certainly a vital recruitment tool, but outreach also fulfills a deeper obligation. Researchers who benefit from government funding, ultimately paid for by taxpayers, have a responsibility to explain to the public what they do and why they do it.

If we want a truly informed democracy, voters need to understand that chemistry will underpin the technologies needed to tackle many of the world’s greatest challenges, from providing cleaner energy sources to ensuring sustainable food supplies. Yet there has been a widespread view among scientists that the public is gripped by an irrational ‘chemophobia’, and that people generally hold a negative opinion of chemistry.

Back in 2015, the Royal Society of Chemistry (RSC) carried out an extensive survey of public attitudes to chemistry. In stark contrast to the expectations of RSC members, it did not uncover an ingrained suspicion of chemistry and its practitioners. Instead, it simply found a lack of awareness, worse than for most other fields of science. Even a brief discussion with focus group participants was enough to stir positive opinions about chemistry and its practical benefits.

The Public attitudes to chemistry report came with a communication toolkit that offers chemists valuable advice on how to talk to people about their subject – not only in public lectures or outreach events, but also in day-to-day interactions. Its goal is to help more chemists become confident ambassadors for their subject.

So did it make any difference? We don’t have more recent statistics on public attitudes to chemistry, but there does seem to have been a genuine shift in how the RSC approaches public engagement. One of the report’s key messages was to identify audiences and go to where they are – either online, or in the real world – rather than expecting the general public to come to chemistry. The RSC’s education coordinators organise hundreds of public activities each year, and they increasingly target audiences who are not already seeking out science, for example by organising events at music festivals or other public spaces. Anecdotally, more chemists are getting involved in these efforts, joining the hardcore of enthusiastic and dedicated people who have been doing chemistry outreach for a long time.

Meanwhile, eager contestants have just taken part in the RSC’s Chemistry Communicators Challenge, which gives chemists the opportunity to practice presenting their science to a wide audience. It also helps to cement the idea among chemists themselves that outreach is a worthwhile activity.

There’s a growing realisation that outreach isn’t something to dust off once a year for the local science fair. Being an ambassador is an ongoing task, and there are more opportunities than ever to have meaningful conversations with people about chemistry. I’m hopeful that the next generation of chemists will see this as a core aspect of their careers.

Of course, only a tiny fraction of today’s chemistry students will end up in permanent academic jobs. Universities need to acknowledge that and help students to understand the dizzying array of employment options that chemistry unlocks. For now, though, the provision for such careers training is still patchy at best and undervalued by many academics.

Universities also need to prepare their students for the world of work beyond the lab. Many employers in various chemistry-based industries say that they want students to learn ‘soft skills’ like communication and teamwork as part of university courses. Postdocs need similar support. These days, many face years in low-paid positions before they secure a permanent job, and all too often they are left poorly equipped for a career outside of academia.

The lack of job security inherent to a postdoc, along with its itinerant nature, can also put off talented people from pursuing an academic career. This is an important factor in one of chemistry’s greatest challenges for the future: retention and progression of minority groups.

In February, the RSC released a report that revealed the scale of that challenge. Diversity landscape of the chemical sciences shows that chemistry loses far too many people who are unfairly disadvantaged due to their gender, sexual orientation or other characteristics.

The RSC followed up in November with Breaking the barriers, which outlines the key stumbling blocks that are preventing women’s progression in academic chemistry. As expected, the barriers include the dreaded limbo of the eternal postdoc, an over-reliance of short term funding and an academic culture that sees working long hours and eschewing family life as essential for career progression.

Taking a break to start a family should not be an impediment to an academic career. Flexible working and shared parental leave can help, but funding and promotion systems also need to allow for gaps in research output that result from people’s caring responsibilities. We need to better understand how structural problems like these act as career barriers to minority groups. Funding bodies are now spending serious cash to address such questions, and provide hard data that will allow us to monitor which interventions improve the situation. The broad responsibilities taken on by UK Research and Innovation, the funding councils’ relatively new umbrella body, also offers an opportunity for a wholesale reform of funding processes to help address some of the systemic inequities that minorities face.

Overall, there is more recognition than ever that change is needed, and that in itself offers grounds for optimism.

Diversity isn’t just a matter of fairness – there’s ample evidence that diverse teams tend to be more successful, for example. And chemistry is certainly a team effort, with interdisciplinary and international collaborations making increasingly important contributions to the field.

Which leads us inexorably to the horror show that is Brexit, one of the most glaring contemporary examples of a country turning its back on international collaboration. As I write, the draft deal that outlines how the UK will leave the European Union is taking a pasting from all sides, and there is still huge uncertainty about whether it will be implemented.

The draft offers little information about the fate of scientific collaborations between the UK and the EU, because it is about the terms of the UK’s departure rather than its future relationship. It is clear that the UK will leave Euratom, but there is nothing on what will happen to UK participation in Euratom-funded research projects. Researchers from other EU member states now living in the UK will be able to apply for permanent residence, but the details of that bureaucratic hellscape are absent. The draft does propose that the UK and EU would largely maintain the status quo on international trade in chemicals, pharmaceuticals and scientific equipment until the end of 2020. But after that there will be years of wrangling over the precise terms of the country’s ongoing links with the EU.

That is why, amid the political turmoil, scientists must continue to make the case for a close partnership in research and innovation with the EU. The UK still has the option to participate in Horizon Europe, the €100 billion (£89 billion) successor to the Horizon 2020 research framework that will begin in 2021. That could be achieved by paying a subscription fee, as associated countries like Norway and Switzerland do.

But clarity is desperately needed about the potential shape of that arrangement. What will the subscription cost be? Would UK research teams be disadvantaged by the looser relationship? Will EU researchers have the same freedom to work in UK partner institutions – and will they be able to bring their families? Will the UK be excluded from parts of Horizon Europe that are explicitly focused on industrial innovation?

For industry, the situation is just as hazy. The UK’s chemical exports to other EU countries were worth £18 billion in 2017. If the UK ends up outside the EU customs union and single market, it would undoubtedly disrupt that trade. The House of Lords EU select committee recently published a report on Brexit’s impact on chemical regulations, which painted a worrying picture of a government utterly unprepared to deal with the fallout.

I understand the sense of despair that many chemists must feel when they consider this unholy mess. But scientists must continue to urge their MPs, vice-chancellors, CEOs and other leaders to push for a settlement that safeguards research and innovation across the UK and EU. Because whenever we put up barriers between nations, or between disciplines, science suffers.

It’s been a privilege to write these Critical Point columns for Chemistry World, and to reach such an august readership. Thanks for reading.