How the leopard got its spots

Alan Turing once looked to chemistry to suggest how patterns form 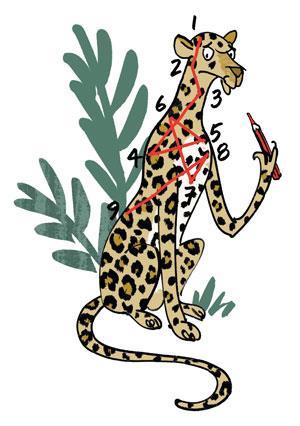 Many animals have intriguing patterns on them – a result of evolution at work. The wing-spots on many butterflies are said to have evolved to give the impression of a pair of watchful eyes, thus discouraging a predator; and the increasing number of dark peppered moths compared to light ones in the UK has been blamed on the general darkening of the environment by industrialisation during the 19th century. Some patterns seem dominated by the need for camouflage, making an individual hard to spot in its normal habitat. Even dramatic stripes, like those of a zebra, are thought be a subtle form of camouflage. A herd of zebras presents such a confusing picture that a predator cannot work out what it is seeing.

In 1902, the author Rudyard Kipling wrote his famous series of Just so stories. They were fantasies for children, and claimed to explain various animal characteristics. Sadly for scientists, none of the stories mentions DNA or genetic inheritance. In How the leopard got his spots, for example, the spots were simply painted on. Then, in 1952, the great Alan Turing, better known as a founder of computing theory, published a mathematical model that hinted at chemistry’s role in pattern formation. He proposed that an initially uniform chemical structure would develop a pattern if it contained two ‘morphogens’. For example, one would be an ‘activator’ whose presence caused the cells in the region to produce pigmented black hairs; the other would be an ‘inhibitor’ in whose presence the local cells would generate white hairs. If the two morphogens had strongly different diffusional properties, a small instability would be amplified in such a way that a pattern would grow.

Biologists were fascinated, and many of them used Turing’s theory to buttress their guesses about the patterns on various creatures. Not only leopards, but zebras, anteaters, goats and giraffes, and many types of cylindrical animal tails, were shown to be at least compatible with the Turing mechanism. Chemists were more sceptical. In almost all aqueous systems, dissolved molecules diffuse at much the same rate; one which you might also expect in a growing leopard.

It took about 40 years for an example of a Turing pattern to be created in the laboratory. Chemists in France made a stable pattern in a chemical reactor, and guessed that it was formed by the Turing mechanism. Their ideas were later supported by some American chemists, who made a genuine Turing pattern using a gel. Their inhibitor was the chlorite ion, ClO2–. This did not react with the gel, and diffused through it at the normal molecular speed. Their activator was the iodide ion, I–; this formed reversible complexes with the gel and diffused through it much more slowly. (It could also be made visible by the well-known starch–iodine reaction, which gives a blue colour). The experiment took several hours, but the gel finally developed a pattern of yellow dots on a blue background.

By itself, the gel experiment does not solve the problem of how the leopard got its spots. Coat patterns may well be determined by some much more subtle interpretation of DNA. Alan Turing, meanwhile, is still best remembered as the brilliant mathematician who founded computing theory.