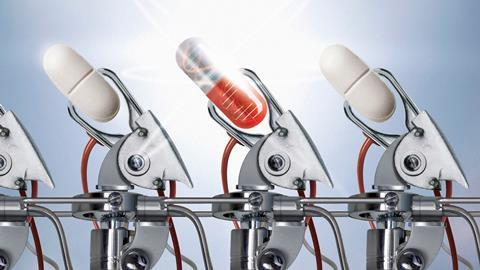 Is this a golden age of new drug classes?

This is a very strange and exciting time in drug discovery. Over much of the last 30 years, small molecule drugs have dominated the field, alongside an ever-increasing number of antibodies. Beyond that, the numbers fell off dramatically, and when new drug classes came along, they often had a slow start. Completely new modes of treatment were rare and difficult to realise.

For example, antisense DNA-based therapies made a huge splash in the early 1990s – or rather, the idea did. The first US-approved drug in the category – Vitravene (fomivirsen), for cytomegalovirus (CMV) – came in 1998, and there were no others until one approval in 2013, and two in 2016. Fomivirsen itself it no longer even on the market, since CMV cases have almost disappeared with advances in anti-HIV therapies. Similarly, Macugen (pegaptanib) – the first aptamer RNA oligonucleotide – was approved in 2004. It’s still the only one, but it’s a niche product that has been largely superseded by antibody drugs. One might be forgiven for thinking (ten years ago or so) that the rewards for such innovations were not worth the trouble they took.

The pace has been picking up, though (as those two antisense approvals in 2016 might have signaled). Another oligonucleotide-based technique, RNA interference, was also the subject of early hype and excitement, and the first compound of its type – Onpattro (patisiran) – was approved just last year. The first viral-vector gene therapies have recently been approved, with many more in development, and these are providing some hope for patients with congenital genetic disorders. Chimeric antigen receptor T-cells (CAR-T) have joined the gene-editing armoury, providing immunotherapy for cancer, including some dramatic results in leukemia. A huge amount of research is ongoing to understand and extend their effects. Crispr-based gene therapies are also in the clinic now, providing yet another new way to address inherited diseases.

Closer to the small-molecule field, targeted protein degradation (TPD) is an emerging mode of action that has never been tried in humans. Instead of inhibiting a protein’s active site or blocking its interaction with a partner, TPD sends the entire protein off to the cell’s proteosome for destruction. This is an effect that can’t be mimicked by just blocking a binding site, since a given protein can have many other partners and functions in a cell. The first clinical trials are being watched very closely.

Stepping back for a wider view, I don’t think that so many simultaneous and distinct new approaches have been in development ever before in the history of drug research. This is new, and I wonder how many people realise it. The poet Randall Jarrell wondered if people really appreciate eras of great creativity, saying that ‘The people who live in a golden age usually go around complaining how yellow everything looks’. Have a look around, if you’re in the biopharma game: what hue are you seeing?

Jarrell’s point, of course, was that such periods only tend to be recognised in retrospect. But I’d like to declare one right now, with some important qualifications. The first: with so many new ideas just hitting human trials, it’s impossible to say which of them will make it through, or how general they’ll be. Honestly, we won’t know for years, because there are so many variations to be tried on all of these, and we’re just at the very beginning. So it would be safer (and more accurate) to call this a golden age for investigating totally new therapies, leaving time for the juries to return their verdicts on how useful any of them really are. I’m enough of an optimist, though, to believe that some are going to prove their worth (perhaps not in their first appearance in the clinic, although that would be just fine).

A second qualification is a bit more sombre: these really are new modes of action, and they’re powerful ones, and we don’t completely understand them. The only way to get a better understanding is to put them into human patients and carefully watch what happens. No amount of preclinical development can keep any experienced observer from crossing their fingers and holding their breath when that happens. I hope that nothing unexpectedly bad comes up. I think that the odds of that happening are low, but they are not zero. They never are. Now come the moments of truth and we get to live through them.