1
Invisible diversity in science and universities 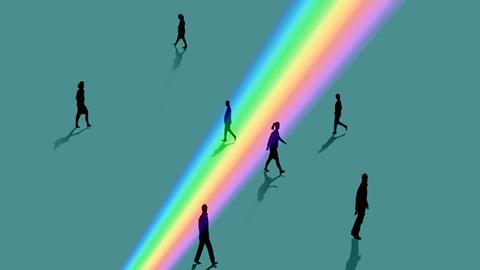 Invisible diversity in science and universities

Note: In this article, ‘queer’ is an umbrella term for all LGBTQ+ categories

Scientists are much more diverse than the stereotypical picture of an old man in a lab coat with wild hair. There are people of any gender, any sexuality, any skin colour, young and old, who love science and research; they are just often not as visible.

I am a queer woman studying chemistry in a master’s programme. In my undergraduate studies, I had a diverse group of peers around me. But when I look at higher career stages, the diversity decreases. During my studies at two different universities, I encountered one lesbian biology professor, no queer chemistry professors and generally most professors are male. Much like the stereotype, white heterosexual cis men are the default scientists. Where are the non-binary science professors? Where are the homosexual academic counsellors?

One reason why you don’t see many queer scientists is that many feel they have to keep their identity to themselves. Sexual and gender identity is usually not openly discussed in the workplace or classroom and is often regarded as irrelevant. People think all that matters are the results of your research or, as a student, your grades and your performance in the lab. Like many queer students, every time I entered a new lab environment, I asked myself: Should I come out to my co-workers?

I particularly remember one response I got: ‘What you do in your bedroom is of nobody’s concern.’ But being queer is not restricted to the bedroom. It is a crucial part of one’s identity and contributes to intellectual diversity. With a diverse mindset in the lab, scientific problems can be tackled from different angles, which results in faster scientific progress. We shouldn’t merely focus on our research, but also make sure to establish a progressive and open environment for our researchers.

I asked many other queer students about their experiences. The main reason they gave for staying in the closet is the fear of career disadvantages. Leaders and people in charge are still mostly white, heterosexual, cisgender men, leaving the impression that people of other genders and sexualities have less chance of a successful career. On top of this, you never know the attitude of the people you are dealing with, and so queer students still have to fear homophobia and transphobia. Queer undergraduates are 7% more likely to drop out of Stem majors than their non-queer peers.1

Many of my correspondents complained about the lack of diversity. ‘I have seen no queer professors or scientists in my major. I really wish there were LGBTQ+ role models because it feels like queer scientists do not exist.’ ‘Next to me as trans man, there are only (presumably) hetero cis men in our research group and only one woman. I wish there was more diversity and a better balanced gender ratio.’ ‘I have seen a few lecturers at pride parties but none of them is out in university or openly states that they are an ally. I wish professors would express an open attitude by, for example, stating that everyone is welcome at the beginning of a lecture series. I would feel much more accepted and safe to come out.’

I assume many queer professors stay in the closet for similar reasons as queer students. Academic careers strongly depend on having the right connections and high impact publications. Queerphobic colleagues or reviewers could impede a successful career.

Experiences of being accepted in the lab strongly vary. I was lucky that I was not the only queer person in the first research group I worked in, and coming out in other labs, I was never truly rejected, besides some snappy comments.

But there have been university staff who openly demonstrated intolerance in my undergraduate studies. For example, one man responsible for dividing the class into groups of two for a four-week lab course only made single-sex pairs. When asked about this, he said if he set up mixed groups, the woman would just stand around and watch the man do all the work. Sexist and antiquated behaviour like this is not only unfair towards women but creates an atmosphere of intolerance that also makes queer people and other minorities feel less accepted.

One of my correspondents, who is a gay man, works on his master’s thesis in a research group where his co-workers often express sexist ideas. He is afraid that they would be homophobic too. He is uneasy in that environment and even considered doing his master’s thesis somewhere else, to avoid unfair treatment. He decided that he does not want his sexual orientation to stop him from working on the topic he wants to, so he stayed in the closet.

Another gay master’s student works in a research group with some researchers from countries that are less accepting of LGBTQ+ individuals. One of his co-workers explicitly called homosexuality a sin, and others clearly have a rather conservative mindset. He says: ‘I do not want to assume the others to be homophobic too, but I cannot know for sure. I am afraid to mention the topic itself because I feel the need to defend myself if anti-queer topics come up. I rather don’t want to know what they would say. Sometimes I isolate myself from the others, which causes stress that adds up to the performance pressure.’

This is one reason why LGBTQ+ scientists more frequently suffer from health issues like elevated stress, depression or insomnia.2

Trans and non-binary students are especially vulnerable to discrimination. A trans male correspondent stated that during transition ‘I had to use women’s as well as men’s toilets because I encountered problems with other guests in both’. The lack of toilets for all genders is a common problem and causes some people to avoid going to the toilet.

Trans and non-binary people also face the problem of deadnaming, where others call them by their former legally assigned name. When I asked some peers if they know other queer students I could talk to, one suggested ‘I know Carlos formerly known as Christina’ (names changed), because they thought the old name still belongs to him. But changing your first name is not the same as changing your maiden name after marriage. The deadname reflects a gender that is not conforming with the person’s identity. Many people would never come out as trans after transition because they fear that they won’t be regarded as their correct gender anymore.

Deadnaming is also prevalent in university internal communication systems. Many universities do not allow first names to be changed on their systems before any legal change of name, so university email addresses and the names on e-learning systems lead to trans people being constantly misgendered. A trans man told me: ‘Especially before the legal change of my first name, I felt very vulnerable and attackable for new people in classes or lab courses. I was always strongly dependent on the lecturer to use my right name and pronouns so that I would not be forced to be out to everyone or misgendered for the whole semester.’ Another of my correspondents always had to ask a colleague to post messages for him in the class e-learning forum, so that his deadname would not be revealed.

Fortunately, this seems to be starting to change. Both of the universities I attended recently allowed students to amend their names prior to any legal change when they have a supplemental ID from the German Society for Transidentity and Intersexuality stating they are transgender. Documents like degree certificates still use legal names. These can be changed when a name is legally amended, so there are no legal issues.

Although the situation for LGBTQ+ scientists and queer people in general has strongly improved in the last few decades, there are still barriers in universities, science and the workplace that need to be removed. The responsibility to create an open and diverse environment, and to raise awareness and visibility should not only rely on the younger generation. It is important that professors, group leaders and other people in charge openly welcome diversity and tolerance first, so students do not need to fear disadvantages. We are not a homogenous mass of cisgendered heterosexuals, but a heterogeneous mixture encompassing a wide spectrum of sexual identity and gender.

How to make university a diverse and welcoming place

Advice for lecturers and staff

Advice for peers and co-workers