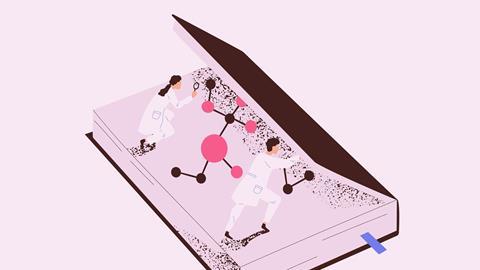 School chemistry books overwhelmingly focus on men, and when women are included they are often portrayed doing domestic activities rather than science, an analysis from the UK and Ireland has found.

In 2021, the Royal Society of Chemistry’s Pay and Reward Survey found women were, on average, paid only 78% of what men were for the same role, while the RSC also found papers from female authors were more likely to be rejected, particularly if the reviewer was a man. Representation of men and women, such as in textbooks, is an important factor. It can fuel unconscious biases and discourage women and people from minority communities from pursuing jobs in science.

A collaboration led by Claire Murray, a researcher at Diamond Light Source, Didcot, UK, and Michael Seery at the Open University, UK decided to investigate four textbooks currently used by the English, Welsh and Northern Irish A-level, Scottish Curriculum for Excellence Highers and Irish Leaving Certificate systems (ages 17–18). Of the 105 historical figures named in the books, only four were women: Nobel prize winners Marie Curie, Linda Buck and Dorothy Hodgkin, and astronomer Letizia Stanghellini. The list of famous men included non-scientists ranging from Julius Caesar to Barack Obama, Kofi Annan and artist David Hockney. Two of the books did not mention any women at all.

When the team analysed the images used in the materials, it found that of the 131 images, only 16 were of women alone, and seven were group photographs of both men and women. This included only one image of a known woman (Hodgkin), compared with 52 identifiable men. In total, only eight women were depicted as scientists, compared with 28 men; other images included women pushing a trolley in a supermarket, doing laundry or opening a fridge.

‘The biases we have observed are not unique to a single publisher, textbook or curriculum. They are also not unique to chemistry,’ Murray said. ‘What matters now is that educators address which scientists they include, as well as the diversity of scientists in the images they select or commission. Let us use this momentum to create a space where everyone is welcome.’

The results are in line with a similar study in 2021 from McDaniel College, US, which found women made up only 30% of images and 3% of named professionals in the index in US general chemistry textbooks. This study found that while a man’s name appears on average every four pages, women are mentioned every 250 pages.

Katherine Haxton, a senior lecturer in chemistry at Keele University, UK, says she struggled to articulate her thoughts beyond ‘I’m not surprised’ and ‘Why is this still a thing?’ ‘There are so many excellent initiatives taking place to enhance diversity in chemistry, and good evidence that access to role models can help build a sense of belonging,’ she adds. ‘It’s disheartening to see that high school textbooks in use in the 21st century have such poor representation of women in science… ensuring that the next generation of diverse and brilliant chemists are inspired by the representations of chemists within textbooks is vital.’