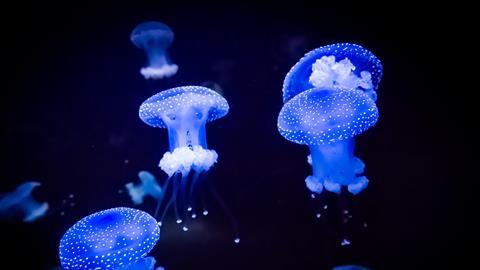 I used to think there was a small molecule called luciferin that emitted the light of bioluminescence. I was not exactly wrong, but there is not just one luciferin. There are many, and to look at their molecular structures you’d be justified in concluding they have nothing in common with one another.

The best known is firefly luciferin, a dimer of two thiazol derivatives: that is, of two five-membered heterocyclic rings containing sulfur and nitrogen. Then there’s bacterial luciferin, which is a derivative of vitamin B2 (riboflavin). Some fungi glow because they contain a derivative of hispidin, a conjugated molecule based on pyrone. Some single-celled marine organisms called dinoflagellates harbour an impressive luciferin related to chlorophyll, in which the porphyrin ring has been opened up at one point.

As this diversity of luciferins testifies, bioluminescence is not a trick learnt long ago in evolutionary history and then passed on throughout the tree of life. It arose independently many times (perhaps more than 50), a fact evident also in the enzymes that react with luciferins to cause light emission. Called luciferases, these proteins are very different in their structures: the genes encoding them are not closely related analogues of one another, but seem to have independent origins. Some bioluminescent systems also involve accessory proteins that modify the emission wavelength of the luciferin.

And yet all of these systems use the same basic mechanism: the enzymes use molecular oxygen to oxidise the luciferin into an electronically excited product that sheds its excess energy by releasing a photon. In this respect, bioluminescence is a classic example of convergent evolution: natural selection ‘discovered’ this process for making light many times over, in each case finding its way to the same underlying chemistry.

What’s even more striking is that bioluminescence plays quite different roles in different organisms.1 Some crustaceans and fish, for example, use the light to signal to prospective mates. Others use it to lure prey, such as the deep-sea anglerfish (where the light from the bulb atop the pole that protrudes from the fish’s head is actually generated by symbiotic bioluminescent bacteria). The cookie-cutter shark uses a fiendishly clever hunting strategy: green bioluminescence on its underside hides its silhouette from potential prey below it while leaving a tapered dark band across its throat that is thought to attract prey (such as dolphins, whales and seals) by mimicking the shape of a much smaller fish.

Many marine species use bioluminescence for warning or evasion, confusing or frightening potential predators with their bursts of light. This seems too to be the function of light emission in dinoflagellates, who might use it as a kind of ‘burglar alarm’: if a predator sets it off, it alerts even bigger predators to tackle the intruder. When pressure deforms the cell walls of these single-celled protists, mechanically sensitive ion channels open. This produces a flux of calcium ions that changes the transmembrane electrical potential and triggers the opening of proton channels. The resulting change in pH stimulates the luciferase proteins into action, transforming the organism’s luciferin within vesicles that surround the cell nucleus and producing blue-green emission. Raymond Goldstein of the University of Cambridge, UK, and his coworkers have recently measured how the intensity of light emission from individual Pyrocystis lunula dinoflagellates is related to the degree of deformation of their cell walls, using glass micropipettes both to squeeze the cells directly and to fire jets of water at them.2

This is the main source of the ghostly glow that can be seen in tropical and subtropical oceans at night: the shear forces caused by water flow in breaking waves or in the wake of a boat are enough to trigger emission from the microscopic organisms. Charles Darwin wrote of “two billows of liquid phosphorus” that he saw at the prow of the Beagle.

Bioluminescence is one of those natural processes that seems so exquisitely designed that it’s baffling how natural selection could have hit upon it. All the same, its independent evolution in very different species implies that the trick of chemiluminescence can’t really be so hard to learn after all. A potential resolution of this apparent paradox is that the oxidative chemical reaction they share in common arose initially for a quite different but ubiquitously important purpose: to soak up reactive oxygen species that might otherwise damage delicate biomolecules.1,3

In this view, the luciferase enzyme began as a protein that would dump these oxygen species onto some convenient sink molecule: some luciferases and luciferins do indeed have anti-oxidant properties. If this idea is correct, it would make bioluminescence an example of the evolutionary process of exaptation, where a trait evolved for one purpose comes to serve another. It’s a reminder that nature is an opportunist, and develops its strategies wherever it can find them.