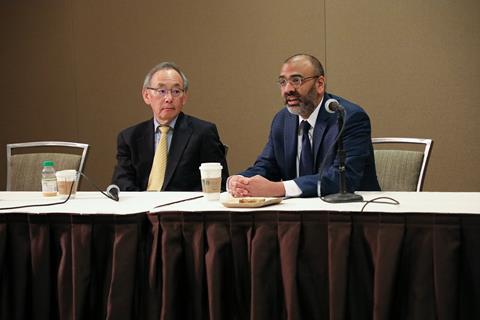 AAAS president Steven Chu, left, and AAAS chief executive Sudip Parikh appear to be taking a softly–softly approach in their dealings with the Trump administration

Science is inherently and increasingly a global enterprise. The American Association for the Advancement of Science’s (AAAS) new top leaders – president Steven Chu and chief executive Sudip Parikh – are both second generation Americans who know first-hand what foreigners bring to the US research enterprise.

At the organisation’s recent annual conference, however, they appeared reluctant to directly confront the White House about how its policies and rhetoric on immigration and national security harm US efforts to draw the world’s top researchers. Their reticence is surprising given that the duo has plenty of experience navigating the political landscape of Washington DC. Chu is a Nobel prize winning physicist who ran the US Department of Energy for over four years, and Parikh spent eight years as a staffer on the Senate panel that sets research agency budgets.

Chu noted that 34% of all US Nobel prize winners in the sciences and medicine were immigrants, and he estimated the figure is over 50% if you count second-generation immigrants like himself. But, rather than fight for policy change, he and Parikh repeated the same mantra about the importance of ‘respectful conversations’, presumably referring to interactions with the Trump administration.

Chu did make some subtle jabs – urging policies that welcome the world’s best and brightest, and criticising efforts to ‘build walls’. Even those subdued, low key remarks received considerable applause, but were drowned out by his vision that the AAAS should ‘mend fences’ by meeting with ‘small groups’ to ‘rebuild the trust’.

It is important to be civil and listen, but it’s no time for niceties. Amid rising nationalism in the US – and with Brexit threatening to erode overseas recruitment at UK research institutions – it’s time to be assertive and make our voices heard. Pussyfooting around won’t work, too much is at stake. Researchers, unions and science advocacy bodies must band together to make the case for science. Policy action is needed if key destinations for top researchers, like the US and UK, are to remain attractive. Given the way the winds are blowing it’s not going to be fair sailing.