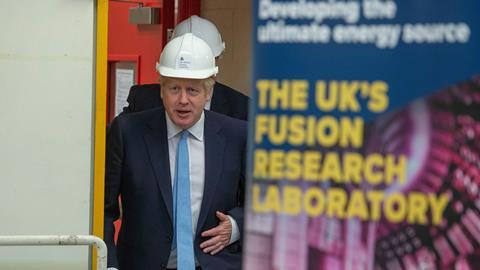 Immigration reforms unveiled to attract leading scientists to the UK

The UK government has announced plans for a fast-track visa system to make it easier for universities to recruit the best researchers from overseas.

The Home Office and the Department for Business, Energy and Industrial Strategy will work with the country’s scientific community to improve current immigration rules, an approach they say will ‘cement the UK as a science superpower’.

‘To ensure we continue to lead the way in the advancement of knowledge, we have to not only support the talent that we already have here, but also ensure our immigration system attracts the very best minds from around the world,’ said prime minister Boris Johnson as he announced the plans at the Culham Centre for Fusion Energy in Oxfordshire.

Many of the options that will be discussed have long been called for by scientists, including getting rid of the cap on the number of tier 1 exceptional talent visas and providing clarity on the status of applicants’ family members.

Scientific societies have tentatively welcomed the plan, but warn that international collaborations with researchers in the EU are still threatened by the prospect of a no-deal Brexit.

‘We welcome the government’s objective of supporting science by facilitating immigration of researchers at all levels, and look forward to discussing the details of a new immigration system,’ said Venki Ramakrishnan, president of the Royal Society, in a statement. ‘But the fact remains, half of international academic talent in UK universities comes from the European Union and the EU is our single largest research collaborator. Alongside immigration reform, therefore, maintaining close working ties with researchers in Europe and access to EU research funding, are essential.’

‘It is encouraging to see the government recognising some of the challenges facing UK science in getting the right people in place to ensure we continue to be world leaders,’ said Jo Reynolds, Royal Society of Chemistry director of science and communities. ‘The current system already causes problems for both academia and industry – it is particularly challenging for SMEs, which account for 96% of industry in the chemical sciences.’

She added: ‘A no-deal Brexit is simply not an option if we want UK science to continue to flourish. This issue is of vital importance and we look forward to seeing the detail of these proposals and working with the government to make sure we get the best system possible.’