Peak oil is not a myth

One might have the impression that hydraulic fracturing (fracking) of shale deposits is the answer to world energy security. Certainly fracking has received much attention and investment, but its prospects must be considered in a broader context.1

In the US, where practically all such operations have been conducted to date, fracking now accounts for 40% of domestic gas production and 30% of oil production. The price of natural gas has plummeted, and overall US oil production has increased for the first time since 1970, which had otherwise been falling in accordance with the predictions M King Hubbert made in 1956. 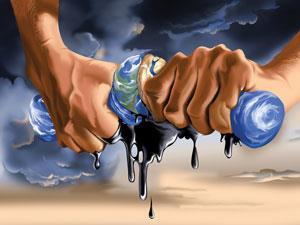 However, this last point is the salient one. Sources of unconventional oil (listed below) such as tight oil (or ‘shale oil’ in popular discourse) are only commercially viable because the need to match the declining rate of conventional oil production has raised oil prices. It is the rate of production of oil that determines its supply, rather than the size of the reserves: ‘The size of the tap, not the tank.’

Current data for the decline in oil fields’ production indicates that around 3 million barrels per day of new production must be achieved year on year, simply to sustain supply levels. This is equivalent to finding another Saudi Arabia every 3–4 years. In this context, fracking is at best a stop-gap measure. Conventional oil production is predicted to drop by over 50% in the next two decades and tight oil is unlikely to replace more than 6%.

Once conventional oil’s rate of loss exceeds unconventional oil’s rate of production, world production must peak. Production of sweet, light crude actually peaked in 2005 but this has been masked by the increase in unconventional oil production, and also by lumping together different kinds of material with oil and referring to the collective as ‘liquids’. (More recently, the term ‘liquids’ is often upgraded to ‘oil’, which is highly disinformative since the properties of the other liquids are quite different from crude oil.)

Fracking produces mostly shale gas (rather than oil), and the major growth in global ‘oil’ production has been from natural gas liquids (NGL; in part from shale gas). But the principal components of NGL are ethane and propane, so it is not a simple substitute for petroleum.

Energy in, energy out

This means that more energy must be invested to maintain output. As a rough comparison, conventional crude oil production has an EROEI in the range 10–20:1, while tight oil comes in at 4–5:1. Oil recovered from (ultra)deepwater drilling gives 4–7:1, heavy oil 3–5:1, and oil shale (kerogen) somewhere around 1.5–4:1. Tar sands is around 6:1, if it is recovered by surface mining, but this falls to around 3:1 when the bitumen is ‘upgraded’ by conversion to a liquid ‘oil’ substitute.

As conventional oil production has fallen, so has oil’s EROEI as we recover it from increasingly inhospitable locations, and with new technologies. The price of a barrel of oil has trebled over the past decade, but output has effectively flatlined. We may be close to the ceiling of global oil production,2 and the prospect of filling the gap with oil from alternative sources is daunting.

Although fracking has produced sizeable volumes of oil and gas in the US, there is no guarantee that a similar success will be met elsewhere, including the UK, in part because the geology is different. Even in the US, it is the sweet spots that have been drilled, and the shale plays elsewhere across the continent are likely to prove less productive.

The shale gas reserves in Poland have been revised down from 187 trillion cubic feet (tcf) to 12–27 tcf: at best, a mere 14% of the original estimate. And most of the production is likely to be gas. Even if we can exhume large volumes of gas at a generous production rate, converting our transport system to run on it would be a considerable undertaking, particularly given the timescale imposed by conventional oil production’s rate of decline. And there are many uses for oil other than to provide liquid fuels, for which substitutes must also be found.

Renewables do not provide a comparable substitute for crude oil and the liquid fuels that are refined from it, since the potential contribution from biofuels is relatively minor. Replacing the UK’s 34 million oil-powered vehicles with electric versions is an unlikely proposition, given the limitations of time and resources such as rare earth metals.3 Mass transit is the more likely future for electric transport than personal cars. The end of cheap, personal transport is a real possibility and may seed changes in our behaviour, such as building resilient communities that produce more of their essentials, such as food and materials, at the local level.

There are many uncertainties, but it seems clear that the age of cheap oil is over. We are entering a very new and different phase of human experience.

Chris Rhodes is an independent consultant based in Reading, UK, and author of  University shambles