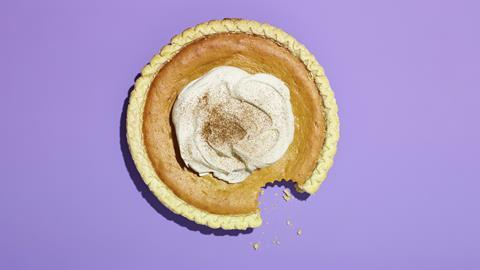 Long before pumpkins were a symbol of Halloween, they were a staple foodstuff of Indigenous peoples of the Americas with preparations varying among tribal nations. European colonists adopted pumpkins into their crops and diets after encountering their use in the Americas. Pumpkin dishes range from savoury to sweet, with pie recipes more numerous than varieties of pumpkin plant species in the genus Cucurbita. By 1796, the American ‘pumpkin pie had evolved into a familiar form that we would recognize today’. The next 150 years would see pumpkin jack-o’-lanterns join pumpkin pie as an autumnal hallmark – long before the pumpkin spice latte. Most of the billion-plus pounds of pumpkins harvested in the US go towards home processing or seasonal ornamentation like pies and jack-o’-lanterns. Pumpkin sweets and smiling pumpkins haunt the ‘spooky season’, offering more goodwill than genuine scares. But during one season in the 1880s, a heartwarming tradition turned into a horror story due to a poisoned pumpkin pie.

The terrifying tale is laid out in a doctor’s letter to the editor of The Medical Record, a weekly journal published in New York.1 A family of four was seized by a variety of gastrointestinal maladies within four hours of finishing dinner, which included a procured pumpkin pie. In conversing with his patients about their meal, he learned the pumpkin pie ‘was of an inordinately yellow color, but withal very insipid’. The doctor’s ears pricked not at the pie’s lack of flavour but its too yellow colour. Adding colourants to food is a long – and ongoing – practice that is aimed at both enticing customers and meeting their expectations.

Today, all food additives in the US must be ‘generally recognized as safe’ (GRAS) – an official US Food and Drug Administration designation. Culinary chicanery is not a thing of the past, but American foods of yesteryear were plagued with ‘frauds, fakes, and legions of new and untested chemicals, dangerously threatening the health of consumers’, as detailed in Deborah Blum’s book The Poison Squad. The American food safety regulatory movement was in its infancy when the ‘inordinately yellow’ pumpkin pie raised the doctor’s suspicions, but he – and many others – knew to be on the lookout for dangerous adulterants. The doctor concluded that ‘some noxious substance had probably been used by the confectioner to give an appearance of richness to the dish’. He identified a possible colourant after reading about it in the very journal he wrote his letter to, something he notes in his letter to the editor: lead of chromate, also known as lead chromate and chrome yellow.

Though the name implies a single colourant, chrome yellow is now known to be a family of pigments (PbCrO4, PbCrO4·xPbSO4, or PbCrO4·xPbO).2 These pigments were popular with painters such as Vincent van Gogh, Paul Gauguin and Paul Cézanne.3 At the same time, chrome yellow was also popular with food manufacturers and concerning for a variety of researchers, medical practitioners and government entities.4 Chrome yellow’s toxic effects include those of lead and chromate, packing a one–two punch. In 1877, Boston’s Board of Health reported that candy purchased from several manufacturers in the city contained chrome yellow, ‘a substance well known to be a deadly poison in very small quantities’. An 1889 letter to the editor of Science catalogued more than a hundred reported chrome yellow poison cases from around the US and abroad, starting in 1859.5 The Medical Record contained several warnings about chrome yellow – like the one the doctor read that help him believe this pigment was perhaps what rendered pumpkin pie poisonous.

In response to the doctor’s letter of chrome yellow’s possible pie poisoning, the editor of The Medical Record responded as follows: ‘The amount of chrome-yellow required to color pie would not be poisonous. The poison is more likely an aniline color. Lemon pies colored with this substance have caused toxic symptoms.’

Providing other possible colourant culprits is reasonable, but dismissing chrome yellow – especially considering what was known then and now – may seem jarring. Any amount of either lead or chromate in foodstuffs likely strikes most modern readers as too much. Such a zero-tolerance response was elicited when the far more recent practice of sprucing up turmeric using lead chromate came to light.6,7 While reports of chrome yellow poisoning ranged from milligrams to several grains (one grain is 64.8mg) or more in the 1880s, the dosage danger line was not then the ‘none at all’ commonly espoused today.  Far more is known about the dangers of lead and chromate on every stage of human development now than in the 19th century. What we know today may scare us, but it keeps us safe.