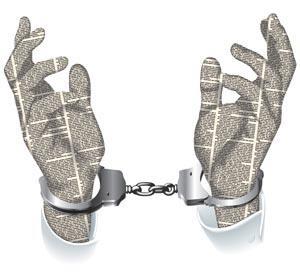 Freedom. The word means different things to different people. For some it means democratic freedom and the chance to elect the leaders of your country. For others the word conjures up the open road, rambling over windswept hills, living your life as you see fit. For scientists and academics freedom is being able to speak your mind, challenge received wisdom and discuss research without fear of persecution.

The rise of the Soviet Union in the 20th century thrust the concept of academic freedom into the spotlight. Science was little more than a handmaiden for the communist regime; the promotion of Lysenkoism – a more politically palatable central dogma for biology than evolutionary theory – showcased the damage that a lack of academic freedom could cause. Russian science was held back for decades by this doctrine and scientists that conducted work that contradicted it were persecuted and even executed.

While the USSR was an extreme example of the lengths governments will go to curtail academic freedom, countries around the world continue to impose restrictions on academics. The worsening climate for academic freedom in Turkey has been making the news recently and follows other high profile cases of government interference. In the latest case the Turkish government has objected to calls from over a thousand academics to halt fighting in the Kurdish region in the south-east of the country. Dismissals from university posts and even arrests on terrorism charges have followed.

Academics – just like everyone else – often have deeply held beliefs. Why should their pronouncements be taken any more seriously than anyone else’s though? As academics spend their time considering multiple lines of evidence and attempting to avoid fooling themselves as to what they’re telling them, they are well placed to consider the problems that beset society. This expertise means that their thoughts on a topic can carry more weight than a member of public.

Linus Pauling was a good example of this principal in action. He was an outspoken peace activist, as well as a brilliant chemist and brought his scientific expertise to bear on the issue of nuclear arms. He recognised the dangers of nuclear fallout to human health early on and his campaigning played a part in securing the test ban on nuclear weapons. His opposition to nuclear weapons and US wars overseas had political and professional repercussion but Pauling considered the price well worth paying.

The world would be a poorer place if academics like Pauling are blocked from bringing their expertise to bear on political and social problems. When they are given space to pursue both their political and scientific passions great things can happen. Governments around the world should remember that before they attempt to gag them.