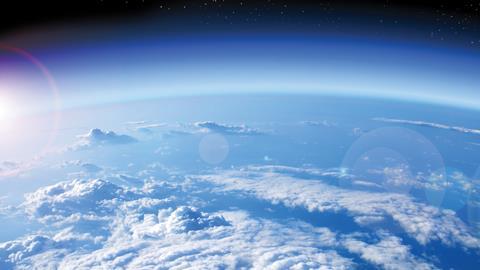 The dark side of dichloromethane

Dichloromethane (DCM) is a fantastically useful solvent. It can dissolve a huge variety of compounds; whisk them through chromatography columns; and then Rotovap away in a trice.

Yet it also has a dark side. DCM has raised health concerns for years: the US Environmental Protection Agency judges it a ‘probable human carcinogen’, for example. Now there is evidence that rising atmospheric concentrations of DCM could be eating away at the Earth’s ozone layer. Although the impact is relatively minor today, the growth in DCM emissions should prompt urgent action from researchers, industry and policymakers.

The prospect of ozone layer destruction by free radicals from substances such as chlorofluorocarbons (CFCs), once widely used as refrigerants, was so calamitous that it prompted the world’s most successful international environmental agreement, the Montreal Protocol.

Agreed in 1987, the protocol laid down a timetable to phase out CFCs and other ozone-destroying compounds. This has already helped to cut the total amount of organic chlorine in the atmosphere from a peak of 3660 parts per trillion to about 3300ppt in 2012.

DCM is not regulated by the protocol. It has an atmospheric lifetime of less than 6 months, and researchers had previously thought that it breaks down before it reaches the stratosphere. However, a study published in July suggests that about one million tonnes of DCM enters the atmosphere every year, and that some of it can indeed attack the ozone layer.1 With surface atmospheric concentrations of DCM rising at about 8% per year, it could contribute up to 30% of the chlorine in the lower atmosphere by 2050.

This is not the first study to raise a warning flag. A project called Caribic (civil aviation for the regular investigation of the atmosphere based on an instrument container) has recorded an increase of around 60% in atmospheric concentrations of DCM over the past decade. Much of that comes from China, which emits about half a million tonnes of DCM per year;2 and India, where DCM emissions more than doubled from 1998 to 2008.3

Unsurprisingly, northeast Asia and India account for about three-quarters of global DCM consumption. It’s mainly used as an extraction or process solvent, but it is also the feedstock for making difluoromethane, another refrigerant gas, whose production grew by 23% between 2012 and 2015 according to the UN Environment Programme. You don’t have to be Sherlock Holmes to deduce that at least some of the atmospheric DCM is coming from difluoromethane plants.

DCM’s threat to the ozone layer should be tackled on several fronts. Acknowledging that the problem exists would be a good first step. For example, in a white paper about DCM, the European Chlorinated Solvent Association states ‘[DCM] does not deplete the ozone layer.’4 Industry groups should review that opinion in light of the atmospheric evidence.

The chemical industry must also reduce its DCM emissions. That should include being more transparent about how much DCM is used in its processes, and taking a collaborative approach to limiting emissions. It could learn from the example set by the pharmaceutical industry, which has been proactive in weaning itself off DCM and improving the sharing of knowledge and best-practice through initiatives such as the ACS Green Chemistry Institute Pharmaceutical Roundtable.5 Meanwhile, local atmospheric monitoring campaigns in India and China would help to better understand the impact of DCM, and pinpoint sources of emissions.

The Montreal Protocol could also play a vital role. One of its great strengths is that it can be updated to account for fresh scientific knowledge. Most recently, the Kigali amendment, agreed in October 2016, set out a new commitment to reduce the use of hydrofluorocarbons (HFCs), including difluoromethane. These compounds have helped to replace CFCs, but their global warming potential can be thousands of times greater than carbon dioxide, and they are exacerbating climate change. If the Kigali amendment is ratified, India, China and other developing countries will start to reduce their HFC production by the mid to late 2020s, lowering it by more than 80% by the 2040s.

During that period, however, difluoromethane production may well rise. That’s because it has a lower global warming potential than most other HFCs, and so it may end up substituting for them in air conditioning units. The discoveries about atmospheric DCM should spur discussions at the next protocol meeting in November, aimed at averting the adverse consequences of a rise in difluoromethane use.

Chinese chemical companies lobbied hard against the Kigali amendment – after all, they had invested heavily in HFC production, and business is booming. But the Chinese government is increasingly flexing its muscle to enforce pollution controls, and it should now turn its attention to DCM. If the Kigali amendment can control HFCs, there is every chance that further changes to the Montreal Protocol could curb emissions of chemistry’s favourite chlorinated solvent.

Thanks to Tom Welton at Imperial College London and Emma Elvidge at the University of East Anglia for helpful discussions.