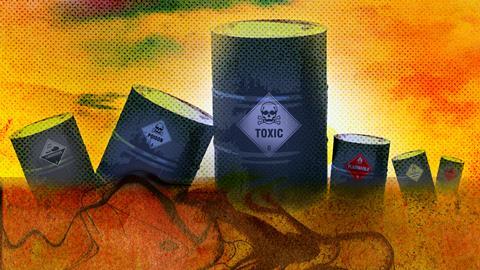 The human cost of inaction on chemical waste

Exposure to harmful waste chemicals is killing people every day. The Lancet Commission on Pollution and Health found that in 2019 diseases caused by pollution and mismanagement of waste were responsible for nearly 11 million premature deaths. That’s 16% of all global deaths.

The commission also found that deaths from environmental lead exposure (900,000) and occupational chemical exposure (870,000) were both higher than either malaria (643,000) or HIV (864,000). Total chemicals-related deaths (1.8 million) are many times greater than deaths from malnutrition, obesity, high-sodium diets and so many other societal issues and injustices – and do not include direct pollution, which accounts for another 9 million deaths.

These mind-boggling numbers were presented at a recent meeting, led by the German government, talking about the acute need for global chemicals management. The UN had previously planned to hold a similar event, but has postponed it until next year. The German environment minister felt we couldn’t wait – I and many others agreed. At the event, German Chancellor (and chemist) Angela Merkel said that ‘in order to ensure that chemical management meets high safety standards in all countries, we also need sound global rules for the handling of chemicals and chemical waste, and rigorous enforcement of these rules’.

The limited, fragmented science-policy interactions on chemical waste management are contributing to health and environmental damage across the world. The problem is directly addressed in the UN Sustainable Development Goals (SDGs): one target speaks of ‘reducing deaths and illness from hazardous chemicals’, linking to another target on the ‘sound management of chemicals and wastes’. But as Merkel noted in her opening remarks at the Berlin meeting, the UN Environment Programme (UNEP) projects are not going to hit these goals without better collaboration.

The consensus in the virtual room – scientists, business leaders and policymakers – chimes with the RSC’s long-held position on this issue: the global problem of chemical pollution and waste management is so critical and urgent that it needs proper global coordination and leadership from governments. The specific science policy interface we endorse will sound familiar: we need an intergovernmental panel, funded by UN member states, with access to world-class scientific and policy expertise in line with that of the Intergovernmental Panel on Climate Change. Rebecca Pow, the UK minister for chemicals, said at the meeting that ‘we support the need for strengthened links between the evidence base and the decision-making community for chemicals and waste through an authoritative science policy interface’. These are welcome words and there is growing alignment around the urgent need for action.

The opportunities are clear – beyond the obvious of saving millions of lives and cleaning up our planet, of course. Merkel set out how critical this challenge is. Our own prime minister, Boris Johnson, spoke recently of his desire for the UK to become a ‘science superpower’. What better opportunity could he ask for? Together with Germany – a nation the UK government publicly boasts of close ties to – we can show leadership in Europe. We can put British science at the heart of global policy, and lead on environmental remediation through technological innovation. The costs to individual member states to establish a science policy interface for chemicals would be but drops in the ocean, tenths of one percent of science budgets. At the meeting Pow committed £255,000 from the UK to a more general chemical waste programme. Given the scale of the problem, is that really a big enough commitment?

No time to waste

The flip side of being a superpower is the responsibility it brings. Europe, and especially the UK, has some of the world’s richest consumers. Total UK waste was 221 million tonnes in 2016, and that story doesn’t end in this country but spreads far beyond our own borders. The decades-long legacy of chemicals manufacturing in developing nations – often by companies from rich nations – must be addressed too. If the prime minister wants the UK to be a scientific superpower, we have to start acting like one; a good first step would be to commit serious funding to setting up and running an intergovernmental panel.

The machinery of the UN is notoriously slow, but we cannot afford to lose momentum now. When the agenda is drawn and the decisions are made, the UN Strategic Approach to International Chemicals Management must know the power of collective feeling in the chemistry community. A leader in this field, Zhanyun Wang at ETH Zürich, Switzerland, has set up a campaign to gather signatures, demonstrating that support for a new UN panel is strong in the scientific community.

We, as chemists, are uniquely placed to become the engine room of the campaign against chemical pollution and waste. I have gladly added my own name and I urge you to do the same. Sign your name. Help us to take global responsibility – and to tackle another global challenge. Millions of lives are at stake.