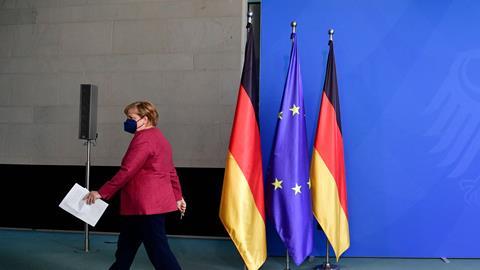 A new era in German politics has begun. Angela Merkel has retired after 16 years as chancellor and a new coalition government is taking shape. Preliminary results show Merkel’s CDU party came a close second to the SPD, and it looks likely that the next chancellor will be the SPD’s Olaf Scholz.

Whoever takes over inherits a well-funded, world-class research base, thanks to long-term prioritisation of science by Merkel’s government. However, there are several areas where it appears Germany is lagging, including digitalisation, as well as politically sensitive issues concerning social inequalities within the university system.

Science and research in Germany as a whole, and the DFG as the largest funding organisation, have been very lucky with Angela Merkel

The government funds research through universities and research organisations. One of the central planks of its strategy is the Pact for Research (PFI). It coordinates support between the federal government and states with the four major research organisations – Helmholtz Association, Max Planck Society, Fraunhofer Society and Leibniz Association – and Germany’s central research funding body, the DFG. Under the pact the current funding period guarantees a 3% a year increase to the federal and state research budget until 2030.

‘Science and research in Germany as a whole, and the DFG as the largest funding organisation, have been very lucky with Angela Merkel,’ says Katja Becker, DFG president. ‘It has been a great privilege to have a chancellor who has a background in science herself and an understanding of the issues involved.’

Merkel studied physics at the University of Leipzig, obtained a PhD in quantum chemistry from the Academy of Sciences in Berlin–Adlershof in East Germany, and later worked at the Central Institute for Physical Chemistry, Academy of Sciences with Rudolf Zahradník, studying the quantum mechanics of gas-particle collisions.

‘During her chancellorship, she never called into question the role and importance of scholarship and education, or of knowledge-driven decisions in politics and society,’ says Becker. ‘As a result, science and research, and their organisations, have benefited significantly from continuous budget increases and financial planning security, all of which has been provided for under the PFI. This has been an excellent situation which I hope we will be able to maintain.’

Despite overall funding increases, an incredible 92% of scientific staff in German universities are on short-term contracts

The fact that funding remained stable during Merkel’s premiership was a direct result of her input into negotiations, says Martin Stratmann, president of the Max Planck Society. ‘Funding periods were set at 10 years; such stability is as important as the level of funding.’ 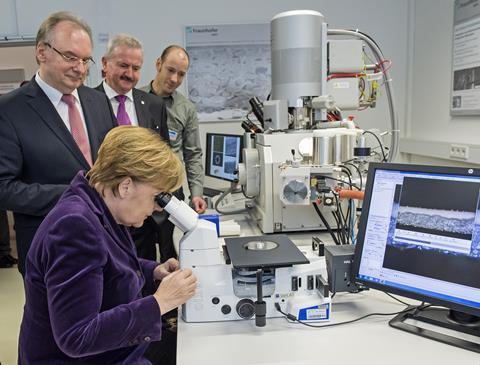 Coming from a physics and quantum chemistry background, Merkel has always had an interest in science with some observers noting that she brought a scientific approach to her politics

Merkel’s scientific background certainly had a positive impact on Germany’s science policy, agrees Wolfram Koch, executive director of the German Chemical Society. On many occasions, it was obvious that her ‘scientific rigour and accompanying soberness’ were an important ingredient in her evidence-based decision-making.

Stratmann also believes that Merkel’s scientific training defined her responses to the two major crises of her chancellorship: the 2008 financial crisis and the pandemic. ‘Both times [she] ramped up spending in science and technology when others might have made cuts. As a result, in both crises, Germany has not done too badly.’

Merkel remained closely involved with research, says Stratmann. ‘She led many regular meetings with scientists, read all the papers, asked detailed questions and made it her business. It was a personal interest with her.’ She also had many friends in science, in part through her husband, the theoretical chemist Joachim Sauer.

‘As a doctor of physics, she not only understood the value and importance of fundamental science but she was very open and interested in all applications and innovation topics,’ comments Patrick Dieckhoff, secretary general, science policy at the Fraunhofer Society. ‘She really understood the details.’

However, as Koch points out, some decisions were met with scepticism in the scientific community, such as the sudden and unexpected phase-out of nuclear power after Fukushima which many saw as premature.

Strong performance on the world stage

Almost all scientific disciplines in Germany have developed ‘very positively during, and as a result of, Merkel’s time in office’, comments Matthias Kleiner, president of the Leibniz Association. ‘We currently see hardly any other country in which science is as important as it is in Germany. Not only was “applied research” the focus of funding, but research was and is valued as the central means of acquiring knowledge and understanding things.’

This approach has delivered dividends, particularly in the physical sciences. According to the Nature Index, which tracks 82 natural sciences journals, Germany is ranked third in the world after the US and China in terms of research output.

Chemistry, in particular, has fared well. Dieckhoff points to the Nobel prizes won by German chemists or chemists working in Germany. Emmanuelle Charpentier, for example, shared last year’s chemistry Nobel prize for her work on Crispr–Cas9 gene-editing technology. Charpentier is director at the Max Planck Institute for Infection Biology in Berlin. Others chemistry Nobel laureates working Germany include Joachim Frank for co-developing cryo-electron microscopy in 2017, Stefan Hell for his work on super-resolved fluorescence microscopy in 2014 and Gerhard Ertl for his studies of chemical processes on solid surfaces in 2007.

In terms of performance, it’s also important to see the European dimension, says Robert Lepenies, professor for pluralist and heterodox economics at Karlshochschule University. ‘Merkel has been a great supporter of the EU so that, for example, the Horizon 2020 budgets have been growing steadily also under the support of the German government.’

Each chancellor has their own priorities, but Stratmann believes that the new leader will continue to support science and research. ‘Merkel was unique in that she was so personally involved in science and research, and this is unlikely to continue with a new chancellor.’ But almost all parties, as well as industry, appear to share the 3.5% of GDP goal.

However, Dieckhoff sounds a note of caution, stressing that science and innovation will need to prove their value to the new government. He expects funding will become more performance-oriented.

Lepenies says it’s unclear what the future holds, but many challenges remain. For example, social mobility in science is very low, as well as gender equality and representation of people from the former East Germany. What’s more, early-career researchers in Germany face a highly precarious future. ‘Despite overall funding increases, an incredible 92% of scientific staff in German universities are on short-term contracts, which makes career planning impossible and systematically excludes people from less well-off backgrounds. There’s a special law that exempts the scientific sector from higher labour standards, which is the subject of fierce political discussion.’

Other areas for improvement include digitalisation: the internet is slow, expensive or non-existent in many areas. ‘It is frustrating to Merkel that this has not advanced as much as she would have liked,’ says Stratmann.

Climate change is another area where action is needed, says Stratmann. ‘We need to speed up and implement the tools and knowledge we have. The problem is that Germany has such a complicated political structure – it is a country of compromise. The chancellor cannot dictate, they have to operate in a coalition government, where the ministries are very strong, and where the 16 states have some autonomy. So it is much harder than in the UK, for example, to reach agreement. The upside to this is that any changes that happen are slow but stable.’