Some liquids are immiscible with others 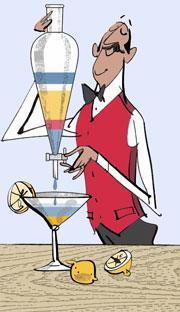 Some liquids are immiscible with others. A good practical chemist knows (for example) that toluene does not mix with water. Hence the magic of the separating funnel: close its tap, pour two immiscible liquids into it, put on its stopper and shake! The immiscible liquids merge into a sort of blobby emulsion but soon separate out into two layers.

That separating funnel raises a subtle chemical question. How many mutually immiscible liquids are there? Water and things miscible with it make one set; the hydrocarbons make another. Mercury, a liquid immiscible with both, makes a third. The organics can be divided into about two - Paraffins tend to be miscible with one another but mix poorly with aromatic amines. In fact you might imagine being able to make a whole pile of immiscible liquids, like a pile of biscuits.

Sadly, this seems not to work. In practice, you can only put about five mutually immiscible liquids in a bottle. One of them is mercury, which forms a heavy bottom layer. A few other mutually immiscible liquids can be piled on top but you can’t easily get more than four. A fifth either mixes with one of those you have added, or makes two of the other liquids miscible with each other.

I once prepared a pile of eight immiscible liquids for a TV demonstration. I made this pile out of just two fundamentally immiscible liquids: water, and a mixture of two organic solvents. I dissolved specific quantities of potassium iodide in the water to make several ’water-liquids’ of increasing density. I coloured those aqueous phases with various dyes that were selectively soluble in water and good on TV. The organic solvent mixture contained chloroform (density 1.498 compared to water) and ethyl acetate (density 0.9006 compared to water). I mixed these into four organic-liquids, with densities intermediate between those of my water-liquids, and coloured each with an organically-soluble dye.

I then combined my liquids into a pile, using a tall measuring cylinder. I had devised a cunning ’titrating’ device based on a separating funnel and this gadget spread each liquid on the top of the pile as it grew. It let me add a new top layer without disturbing the layers below. My first, bottom liquid, was a dense aqueous solution of potassium iodide in water, with a red dye. On top of that went an immiscible layer of a chloroform/ethyl-acetate mixture with a slightly lower density, and a blue dye. On top of that went a still less dense aqueous solution, red again. Then came an uncoloured organic layer and then a still less dense aqueous layer, yellow this time. And so on. I had various hydrometers by which I could measure, and if necessary adjust, the density of each liquid before I added it to the top of the growing pile. I took everything slowly and carefully - haste could ruin everything!

Ultimately my measuring cylinder contained a multicoloured pile of eight liquids. It amazed the audience. Only when I stirred the whole thing up and got just two layers (aqueous and organic) was the trick revealed.

Could clever chemistry do this for real? One way might be to use melted polymers, which usually do not mix with each other. Thus melted polythene is immiscible with melted polypropylene. Indeed, a true ’alloy’ of mutually miscible polymers, such as that between polystyrene and poly(dimethylphenylene oxide), is a rare and valuable material in its own right. Yet a demonstration based on melted polymers would give terrible troubles with temperature and viscosity.

Room-temperature chemistry cannot yet put more than about five mutually immiscible liquids in a bottle.