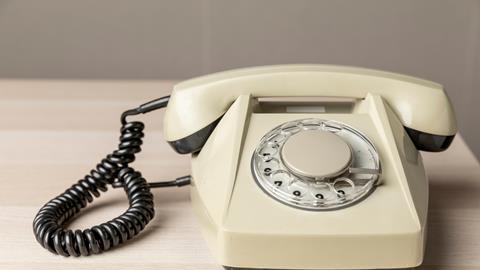 Brian Clegg explores the origin, uses and chemistry of Bakelite

This week, we go back in time to the origins of manufacture and defy nature, as Brian Clegg brings us one of the first man-made materials:

When early humans first began to produce tools and other artefacts, they were limited to stone and living matter - whether wood, plant material or animal-based - as the basis for their manufacturing. With time, the ability to heat materials and process them added metals, glass and ceramics like pottery to that line up. But for a good two thousand years there was nothing else available. In the early 1900s a sixth type of substance, the first truly artificial manufacturing material, joined the original five. It was called Bakelite.

Bakelite wasn't the first plastic. That honour went to a variant of celluloid called Parkesine, produced in 1855 (the 'celluloid' name was registered eight years later). But celluloid, originally developed as a replacement for expensive ivory in billiard ball production, and later to find fame as a basis for film reels, was not an ideal manufacturing material. It was highly flammable and tended to break down over time. It was also still based on living matter, produced from the cellulose in plants. The same could be said for the casein plastics, based on milk protein, produced in the late 1890s. But Bakelite was truly something new, a totally artificial substance from which to make things.

Parkesine found fame as a basis for film reels

Bakelite was developed by the Belgian chemist Leo Baekeland, working in New York, US, in the early years of the twentieth century. Baekeland was originally attempting to find a synthetic replacement for shellac, a lacquer originally used to decorate wooden boxes, but by the early twentieth century finding its way into a range of uses from insulating electrical wires, making 78rpm gramophone records and sealing wood surfaces from furniture to bowling alleys.

Shellac is an expensive substance to produce. It is secreted by the female lac bug, then has to be scraped from trees, and also has a limited shelf life. Baekeland wanted a cheaper and more stable alternative, and by 1909 had settled on the product that would change the face of manufacturing. It's not quite clear how he first formulated his new resin, which was a complex organic molecule formed by reacting phenol and formaldehyde. 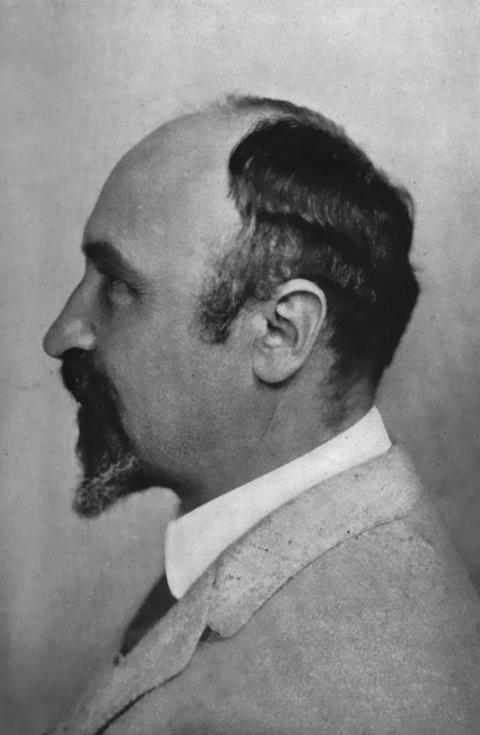 The two basic components of Bakelite were already well known. Phenol, a benzene ring with a hydroxyl group in place of one of the hydrogens was better known as the antiseptic carbolic acid; while formaldehyde - a simple organic molecule where a carbon atom is bound to two hydrogens and an oxygen - was commonly used as disinfectant and preservative.

The simplest phenol-formaldehyde resin just combines the two, but in Bakelite, where the resin is usually mixed with a wood flour and put under pressure, a more complex polymer forms in the curing process, resulting in the typical hard plastic material. Polymers are large molecules that have a structure of repeating units, often producing a strength that makes them ideal for construction. The curing procedure that is required to make Bakelite is known as a thermosetting process - it is irreversible once the polymer has formed, unlike thermoplastics which can be melted and re-shaped.

So Bakelite starts life as a liquid resin, suitable for the lacquer applications that Baekeland had in mind, but it soon solidifies to form a tough, rather brittle solid that can be carved and worked like stone. Initially, Bakelite was used to replace typical celluloid and shellac applications, from billiard balls to early phonograph records, but soon it would be seen as a much more versatile material. Although Bakelite is still produced today, its heyday ran from the 1920s to the 1940s. Now there is a much wider range of plastics available, many of them more suitable for injection moulding and other forms of mass production - Bakelite was more of a craftsman's material, and many early Bakelite products are now sought-after collectors' items. 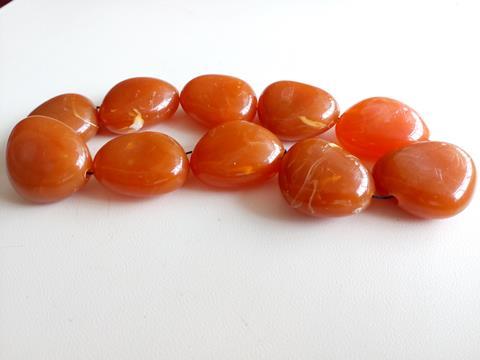 Bakelite was used as a substitute for wood in the casings of 'ultra-modern' wireless radio sets, and to replace materials like tortoiseshell in carved goods. It was even considered in the US as a material for making coins, when metal shortages during the second world war made an alternative desirable, but turned out to be too easily broken. It was, however, used to produce jewellery, replacing the likes of jet and amber, and allowing designers to incorporate a wide range of colours and marbled swirls. But probably the most instantly recognizable Bakelite products were the early telephones. Bakelite was still being used to manufacture phones as late as the 1960s, and anyone who dates back to that period will remember the heavy, solid feel of those ubiquitous handsets.

When I made a crude phenol formaldehyde resin in chemistry club at school the result was a block of purple-grey material, hard and smooth to the touch, yet distorted by the bubbles generated during the chemical reaction without the pressure used in the Bakelite process. It wasn't much to look at. Yet it felt special. We had created in our fume cupboard the first of the substances that went beyond nature and helped shape today's technology. There might be a hint of Doctor Frankenstein in that urge to go beyond the natural. But without Bakelite and its successors, the modern world would have been a very different - and less interesting - place.

So a bit of 'Frankenscience' can, on occasion, lead to promising products. That was Brian Clegg, with the origin, uses and chemistry of Bakelite. Now, next week, a revolutionary moment in chemistry.

It is not very fashionable these days to say that there was a specific moment or event when everything changed. And yet, there is a pair of compounds that forced almost everyone's thinking about the material world to change - the terrifying silver fulminate and the rather dull silver cyanate. And there lies a tale.

Meera Senthilingam
And to hear the tale of these terrifying compounds, join Andrea Sella in next week's Chemistry in its element. Until then, thank you for listening. I'm Meera Senthilingam.