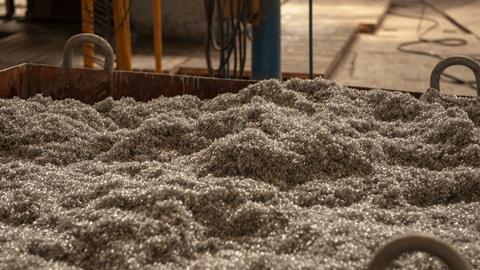 This week, fictional villains and wartime aeroplanes. Explaining the compound linking the two is Lars Öhrström:

Popular fiction villains often belong to sinister organisations with obscure names, and one of the more enigmatic examples is the Cryolite Corporation of Denmark, appearing in Peter Høeg's 1992 bestselling novel Miss Smilla's Feeling for Snow.

However, in addition to Høeg's protagonist Smilla Jaspersen, non-fictional heroes also have connections to the very real and important chemical named cryolite, with formula Na3AlF6. For example, Vernon Jones landing his flake hit, petrol leaking, Flying Fortress on a bog in south west Sweden in 1943, and Henry Larsen, commander of the St. Roch during a voyage through the Northwest passage in 1940, the real purpose of which was not revealed until 50 years later. 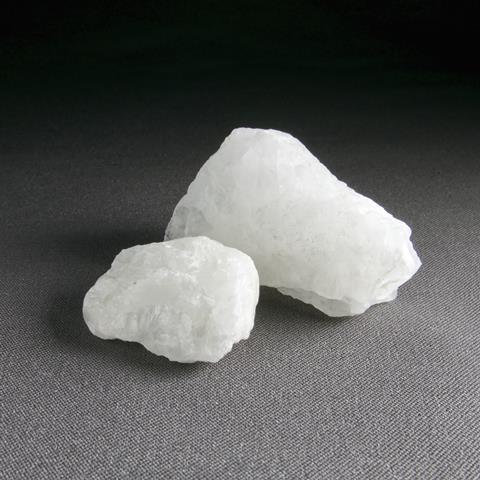 Bauxite on the other hand is relatively common, but to lure the metal out of the mineral on an industrial scale turned out to be tricky. Three electrons need to be added to the Al3+ ions to make them neutral and metallic, and although it was recognised early on that the way to do this was to pass an electric current through a solution of the ions - what we call electrolysis - it took some 50 years of experimenting until this was achieved.

The problem is that you cannot electrolyse aluminium in water, as the electrons would combine with H+ ions, producing hydrogen gas. If we circumvent the problem by melting aluminium oxide directly, the very high melting point, 2072°C, turns out to be prohibitively expensive. This is where cryolite comes in. In 1886, both Charles Hall in Ohio, US, and Paul Héroult in Normandy, France, discovered that molten cryolite, with the moderate melting temperature of only 1012ºC, easily dissolves aluminium oxide.  Thus the Hall-Héroult process was born, still in use today.

The name cryolite stems from the Greek words for cold, "cryo" and stone, "lithos", and this brings us to polar hero Henry Larsen's role in this story. Aluminium started to become a major material for aeroplane construction in the 1930s, and the occupation of Denmark by Germany in 1940 made the British and its allies nervous, as cryolite was found in only one place on earth - the Ivittuu mine in southern Greenland. Under the cover of a Northwest passage journey, the only Canadian government vessel able to navigate the icy Greenlandic waters, the St. Roch under command of Henry Larsen of the Royal Canadian Mounted Police, set out from Vancouver to survey the situation, as there was fear of a German invasion. 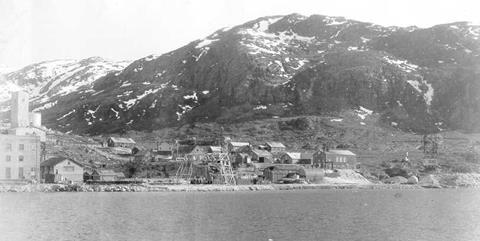 The cryolite mine in Ivigtut, Greenland (1940)

With the United States entry into the war the cryolite question was resolved by Greenland temporarily becoming a US protectorate, and the production of the Ivittuu mine increased substantially. Whether there was ever a real German plan to capture the cryolite mine, as hinted to in Peter H?eg's novel, I don't know, but the only recorded Nazi attempt on Greenland was an effort to establish a weather station with a humble invasion force of 17 that was soon discovered by the Danish Hound Sledge Patrol.

Instead, the Germans set up a factory for producing synthetic cryolite next to the aluminium plant in Her?ya in southern Norway. This process was rather new at the time, but Nordische Aluminium never saw full-scale production as it was the target of a successful bombing mission. Not only were the factories destroyed: of the 180 B17s dispatched in the morning of the 24th of July 1943, only one was lost. However, skilful navigation and piloting of the damaged aircraft Georgia Rebel, safely landed 1st pilot Jones and his crew on neutral ground. This was the first of over 200 such US Air Force emergency landings in Sweden during world war II.

The Ivittuu mine was depleted in 1987 and today only synthetic cryolite is used in the production of aluminium. Most commonly this artificial cryolite is obtained from calcium fluoride, also known as the mineral fluorspar, sodium carbonate and aluminium hydroxide, in a multi step process.

One wonders, had this mine and rare mineral not been discovered, would chemists have been clever enough to prepare it anyway and devise the Hall-Héroult process, or would there still be aluminium plates and cutlery at French state dinners, just as in the times of Napol?on III when aluminium was worth more than its weight in gold.

Whether natural or synthetic, this cold stone of a compound certainly proved useful throughout the war and up until the current day. That was Lars Öhrström from the Chalmers tekniska h?gskola in Sweden. Now, next week, a compound that could be considered as a double-edged sword.

Explosives are the bad boy applications of nitric acid, but one of those compounds, nitrocellulose, had much more constructive applications: it was used to produce the film stock used in shooting movies until around 1950. Such old films have to be handled extremely carefully, as the plasticised compound can easily flash into flame.

And you can find out the chemistry causing these flames by joining Brian Clegg in next week's Chemistry in it's element. Until then, thank you for listening. I'm Meera Senthilingam.