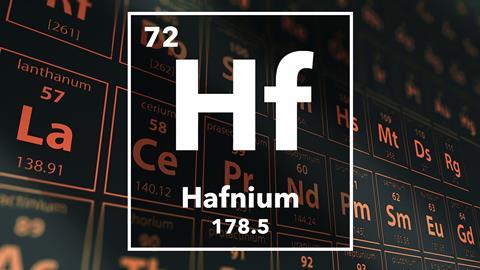 This week, super alloys, nuclear reactors and space rockets. Just some of the reasons that this week's uncommon and unknown element hafnium is cherished by scientists worldwide. Here's Eric Scerri.

Today I am going to talk about an uncommon element that is also not very well known. However it has a rather interesting history and some important commercial applications including its use in the nuclear power industry and in the making of super-alloys.

The element is number 72 in the periodic table, and is called hafnium. It takes its name from hafnium – the old Latin name for Copenhagen which is the city in which it was first isolated in 1922. But first let me back-track a little. In 1913, the physicist Henry Moseley, working in Manchester and later Oxford, discovered an experimental method for ordering the elements according to their atomic numbers. Prior to this work the elements in the periodic table had been ordered by using their atomic weights, which gave rise to a series with uneven gaps between each element. As a result, nobody could be sure how many elements remained to be discovered. All this changed following Moseley's discovery because atomic number increases in whole number steps as one moves through the periodic table. 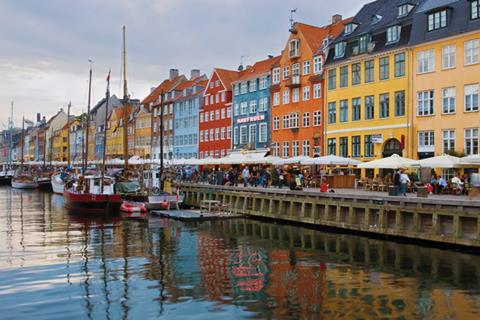 One of the gaps that opened up was between element 71, lutetium, and element 73, tantalum. Moreover this particular case was complicated by the fact that it was not clear if element 72 would turn out to be a transition metal, or perhaps a rare earth element, since element 72 falls at the boundary between these two types of elements.   Some chemists thought the element would be a rare earth element and carried out many fruitless searches for the element among minerals containing rare earths. But some other chemists suggested that the new element would be a transition metal. The chemical argument for this was quite simple. According to some versions of the periodic table, element 72 fell underneath titanium and zirconium in the periodic table, and both of these elements were known transition elements. Then an argument from physics was proposed by Niels Bohr, one of the founders of quantum theory. According to the electronic configuration that Bohr predicted for element 72 he also agreed that it had be a transition metal.

In 1923 Coster and Hevesy – a couple of young researchers in Bohr's institute – decided to try to isolate the element as a test of Bohr's theory. In order to do this they followed the chemists' suggestion and decided to look among the ores of zirconium. Within just a few weeks they succeeded by examining some Norwegian zircon and by detecting the X-ray spectral line frequencies expected for this element. It was the discovery of one of the only six then remaining gaps in the periodic table. It also turned out to be the one but last discovery of any naturally occurring element, the last one being rhenium a few years later.

Hafnium is not all that uncommon compared to many other exotic elements. It occurs to the extent of 5.8 ppm of the Earth's upper crust by weight. The reason why it took a long time to isolate is that its atoms have almost the identical size to those of zirconium, along with which it typically occurs in minerals. This makes it difficult to separate from zirconium. But these days a number of methods of extraction have been developed and hafnium has found many of applications because of its rather specific properties. It is a shiny, silvery metal that is corrosion resistant to a remarkable degree. More important perhaps, it has a very high ability to capture neutrons which renders it ideal for making control rods in nuclear reactors, especially those that need to operate under harsh conditions such as today's pressurized water reactors. 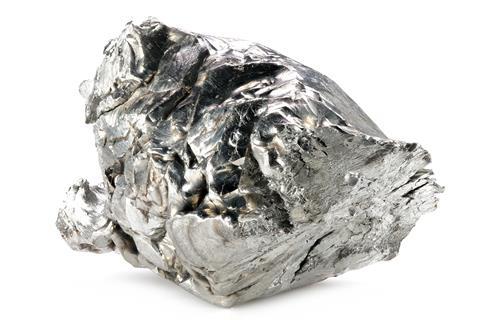 Hafnium is also very good at forming super-alloys, which can withstand very high temperatures and has found applications in making a variety of parts for space vehicles. In terms of regular compounds rather than alloys, hafnium carbide has the highest melting point, of any compound consisting of just two elements, at just under 3,9900C. Moving up to compounds of three elements, the mixed carbide of tungsten and hafnium has the single highest melting point of any known compound at 41250C.

Hafnium is not cheap given how difficult it is to extract and because of its relative scarcity. But there are some cases where one just has to pay the price! In the case of nuclear reactors for example, it costs in excess of a million dollars just for the neutron absorbing hafnium rods.

On my recent trip to Copenhagen I spent a long time looking for the famous little mermaid that is symbolic of the city. When I found it I was surprised to see that it is rather insignificant but this did not seem to lessen the special attention that it held from tourists from all over the world. I think it's a little bit like the metal hafnium, first discovered in the mermaid's city of Copenhagen. It too seems somewhat insignificant at first sight and yet it holds the attention of a variety of scientists because of its rather special properties.

The ability to capture neutrons and the highest melting point of any compound, you can see why scientists consider this element as special as the little mermaid. That was Eric Scerri revealing the powers of Hafnium. Now next week, we meet the King of the elements.

And Brian Clegg will be revealing the beauty of Hydrogen in next week's Chemistry in its Element. Until then, thanks for listening, I'm Meera Senthilingam from the nakedscientists.com and I'll see you next week.