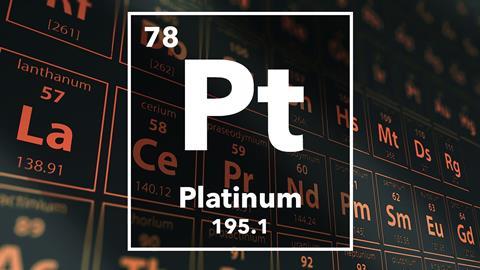 The story of 'unripe gold', with Katherine Hoxton

Hello – blonde hair, expensive jewellery, a new generation of catalysts and anti cancer drugs plus a mistake that cost the Spanish conquistadors very dear. Have you spotted the connection yet? If not, here's Katherine Haxton.

platinum as a metal speaks of prestige, value and power. An album has gone platinum, platinum wedding anniversaries, and highly prized platinum jewellery such as rings and Rolex watches.

Platinum is a very different substance to a chemist. Platinum metal is silvery white and does not oxidise, properties that make it highly appealing for jewellery. It is more precious than silver but with prices more volatile than gold. Platinum has broad chemical resistance although the metal may be dissolved in aqua regia, a highly acidic mixture of nitric and hydrochloric acids, forming chloroplatinic acid, and has an extremely high melting point in excess of two thousand degrees centigrade.

Spanish conquistadors in the 16th century viewed platinum as a nuisance, a white metal obtained while panning for gold and difficult to separate from the gold. It was named Platina, a diminutive of Plata, the Spanish word for silver. Platina was believed to be unripe gold, and was flung back into the rivers in the hope that it would continue to mature into gold. There is anecdotal evidence of gold mines being abandoned due to platinum contamination.

Platinum's properties allowed it to defy identification and classification until the 18th century.Its high melting point and broad chemical resistance meant that obtaining a pure sample of the metal was difficult. Platinum's place as a precious metal was first established in the 18th century by Henrik Sheffer, who succeeded in melting or fusing platinum by adding arsenic. Three chemists, Lavoisier, Seguin and Musnier began working together in the late 18th century to improve the design of their furnaces to enable platinum to be melted without the need of fluxes such as arsenic. The French Chemist Lavoisier wrote for help from Josiah Wedgewood, the founder of Wedgewood pottery, asking for a clay that could be used to manufacture vessels that could withstand the high temperatures needed to melt platinum. Seguin later requested details of which fuel could burn sufficiently hot enough, and for further details on creating the hottest flame possible. Lavoisier succeeded in melting platinum using oxygen to enhance the heat of the furnace but it would still be many years before a process could be found to produce commercial quantities. Of course, that was prior to Lavoisier's beheading at the height of the French Revolution in 1794. In 1792 the French Academy of Science obtained a supply of platinum from Marc-Etienne Janety, a master goldsmith in Paris. Janety had managed to develop a means of producing workable platinum using arsenic, and a way to remove the arsenic afterwards with limited success. It is ironic that the very properties that make platinum metal so desirable caused so many difficulties for its discoverers. King Louis XVI of France believed that platinum metal was only fit for kings, due in part to the difficulties in working with pure samples. 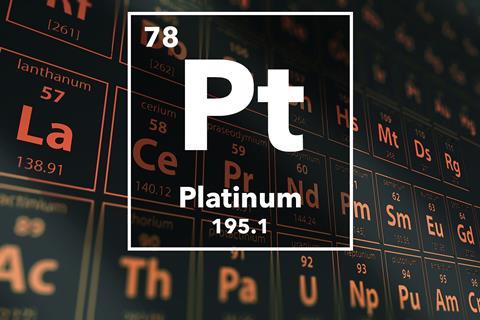 Periodic table of the elements – 78 – Platinum

In 1859, a method for melting up to 15 kilograms of platinum using a furnace lined with lime and oxygen and coal gas as fuel was described by Deville and Debray. The 19th century also saw the development of the first fuel cell using platinum electrodes. Fuel cells produce electricity through electrochemical reactions, often using platinum as non-reactive electrodes, and represent an important area of research into environmentally friendly technologies and cleaner, greener sources of energy today. The very properties of platinum that had made it so hard to work with became valued and platinum was used for lab equipment, and other applications where its broad chemical resistance was required. Johnson Matthey perfected the techniques of separating and refining the platinum group metals and in 1879 Matthey produced a standard metre measure made of a platinum and iridium alloy.

Platinum compounds have been well documented, perhaps none more so than cis-diamminedichloroplatinum(II), cisplatin. In the early 1960s, Barnett Rosenberg was conducting experiments on bacteria, measuring the effects of electrical currents on cell growth. It was observed that the E.coli bacteria were abnormally long during the experiment, something that could not be attributed to the electric current. Further investigation revealed a number of platinum compounds were being formed due to reaction of the buffer and platinum electrode and subsequent characterization of these compounds isolated cisplatin. Cisplatin was found to inhibit cell division thus causing the elongation of the bacteria, and was tested in mice for anticancer properties. This was at the height of a push for new cures for cancer, and screening programs for novel chemotherapy agents. Initial experiments failed due to too high a dose but finally evidence was obtained for cisplatin. Cisplatin today is widely used to treat epithelial malignancies with outstanding results in the treatment of testicular cancers. Cisplatin is a remarkable tale of serendipity in science research and a wonderful example of how major breakthroughs cannot be commanded. The success of cisplatin has spawned a search for new platinum anticancer compounds that has produced oxaliplatin and carboplatin to date with several other compounds at various stages of development. Platinum's chemical legacy goes far beyond medicinal chemistry. 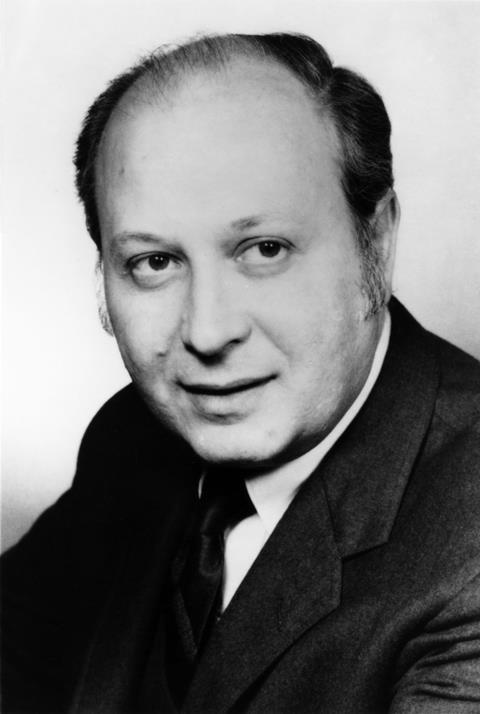 In the last 50 years platinum catalysts have become widespread in industry, used to enhance the octane number of gasoline, and manufacturing primary feedstocks for the plastics industry. Platinum plays a significant role in many of the manufactured goods we rely on today. The Nobel prize in Chemistry was awarded, in 2007, to Gerhard Ertl who's work included a study of oxidation of carbon monoxide on platinum surfaces. Platinum group metals are also components of many autocatalysts, converting car exhaust gases in to less harmful substance.

And our fascination with platinum as a rare and robust metal continues. The term 'platinum blond' came about in the 1930's when actresses with platinum jewellery were the stars of newly invented talking pictures. The sinking of the Titanic inspired public displays of mourning, including a new fashion for black and white jewellery. Platinum metal became popular in such pieces due to its pale colour. More recently it was the metal of choice for the wedding bands of Elvis and Priscilla Presley, and remains synonymous with quality and wealth today.

Amazing to think that the Spanish colonists were throwing the stuff away. That was Keele University's Katherine Haxton with the story of Platinum. Next week it's time to relive your schooldays.

If there were a competition for the chemical element mostly likely to generate schoolboy howlers, the winner would be germanium. It's inevitable that the substance with atomic number 32 is quite often described as a flowering plant with the common name cranesbill. Just one letter differentiates the flower geranium from the element germanium – an easy enough mistake.

You may like to say it with flowers and give someone a gift of a geranium – but you're more likely to communicate down a modern fibre optic phone line, and then it's germanium all the way.

Indeed, and you can download Brian Clegg's tale of germanium, probably via a fibre optic too, because he'll be here next week for Chemistry in its Element.  I'm Chris Smith, thank you for listening and goodbye.