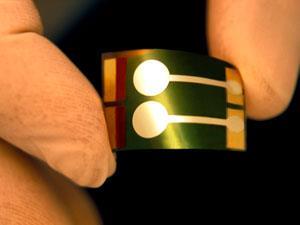 This week, a compound we would struggle to live without. Explaining more is David Lindsay

It’s hard to imagine a world without electricity. Almost every piece of technology we use relies on it, and in turn we rely on materials which conduct electricity. We’re all familiar with organic polymers. They’re just as ubiquitous as electricity in the modern world, and some examples are polythene, nylon, polystyrene and Teflon. Organic polymers are huge molecules, made up of hundreds to millions of small, carbon-based units called monomers, which are linked together to form the polymer, or macromolecule. Organic polymers are everywhere around us for several reasons – they are cheap and easy to make, they are strong yet light, and most importantly, they can be easily processed into any desired form, from polythene shopping bags, to Kevlar aeroplane wings.

This processability gives them huge advantages over metals, but organic polymers, plastics, retained the disadvantage of being electrical insulators, not conductors. But ever since the discovery of organic polymers in the early 20th century, scientists have recognised the potential of a material that could conduct electricity like a metal, but still be processed like a plastic – a conducting organic polymer. Besides the practical applications, theoreticians and physicists were also fascinated by the idea of non-metallic materials which could display metallic, conducting properties. Thus, for many years there was great interest in trying to make organic, carbon-based polymers which conducted electricity.

One focus of this effort was polyacetylene, an organic polymer with a simple repeat unit of C2H2. Polyacetylene was of interest due to its alternating single and double carbon-carbon bonds. This alternating structure leads to a fixed carbon backbone, but with a cloud of electrons spread, or delocalised, across the polymer chain. Theoreticians proposed that, as the length of the chain tended to infinity, the conductivity of the material should increase dramatically.

Like many great discoveries though, the breakthrough came by accident. Hideki Shirakawa, a researcher at the Tokyo Institute of Technology in the 1970s, was preparing a batch of polyacetylene and accidentally used a thousand times more catalyst than intended. Rather than the usual black powder, the polyacetylene he obtained was a shiny, silver film. On the other side of the world, at the University of Pennsylvania, two Alans, Heeger and MacDiarmid, one a chemist and one a physicist, were investigating the inorganic polymer sulfur nitride, with an interest in producing a conducting material. When MacDiarmid visited Tokyo and learned of Shirakawa’s research, he invited Shirakawa to Pennsylvania, so the three could collaborate on polyacetylene.

The trio soon made the crucial breakthrough when they found that oxidising the polyacetylene with halgoens such as bromine or iodine, in a process known as doping, produced an organic polymer with a conductivity 10 million times greater than the undoped, insulating polyacetylene. By varying the concentration of doping agent, they could choose whether their polyacetylene was an insulator, a semi-conductor, or a conductor to rival metals such as silver and copper.

This successful preparation of a conducting organic polymer answered many theoretical questions regarding the nature of conductance, and helped deepen our understanding of the phenomenon. However, the collaboration between Shirakawa, Heeger and MacDiarmid also highlighted the different ways in which chemists and physicists think about conductance. The halogen dopant removes an electron from the delocalised system, creating a hole via p-type doping, as physicists would call it, allowing charge to flow.

Unfortunately, however, polyacetylene is unstable in air, and is poorly soluble in most solvents. This makes it difficult to process, and rules it out as the holy grail of a conducting, processable plastic. However, Shirakawa, Heeger and MacDiarmid had made the breakthrough, and researchers around the world joined them in pouring effort into the study of other potential candidates. Today, a vast number of conducting organic polymers are known, and materials such as poly(aniline) and poly(phenylenevinylene) are found in commercial applications. In particular, poly(phenylvinylene) is found in organic light emitting diodes, or OLEDs, which in turn are used in televisions, flexible display screens, mobile phone display screens and digital cameras. Conducting organic polymers also show great promise in other areas, such as solar cell technology and the production of flexible integrated circuit boards.

Shirakawa, Heeger and MacDiarmid’s work on conducting polyacetylene led to a theoretical revolution, and the development of some remarkable new technologies. It’s somehow fitting that, in the year 2000, they were awarded the Nobel Prize for a discovery which ushered in a new era.

Glasgow university’s David Lindsay there, with the technologically revolutionising chemistry of polyacetlyene. Next week, what’s that pink tinge on your skin?

When I was young I seemed to spend most of the summer with my extremities – particularly my ears – coated in a pink lotion. These were the days before sun block was common. If you had fair skin and you went out in the sun, there was only one option - you burned. And when you’d burned, on went the calamine. Although the familiar pink colouration of this soothing balm comes from a small proportion of iron oxide, the main active ingredient is an inorganic compound that has had a place in medical chests for at least 2,000 years. It is zinc oxide.

And explore the chemistry behind these medical benefits by joining Brian Clegg in next week’s Chemistry in its Element. Until then, thank you for listening. I’m Meera Senthilingam.