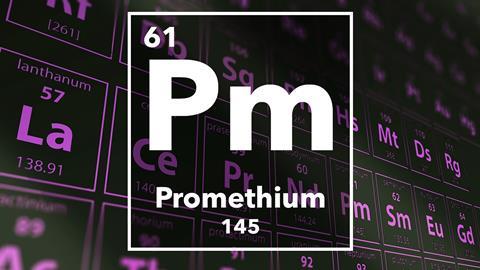 This week, we enter the world of Greek mythology to reveal the great powers of the element promethium.

Of all the figures in Greek myth, Prometheus has to be one of the most significant for science. This Titan brought fire to mankind. For that gift he was punished by having his liver pecked out by an eagle every day. Such was the reward for being an early technologist.

In other legends Prometheus gave us maths and science, agriculture and medicine - or even created humans in the first place. This uncertainty of just what Prometheus was responsible for is echoed in the uncertainty of who discovered the element promethium, number 61 in the periodic table.

We know who named it. That was Grace Coryell, the wife of Charles Coryell who with colleagues Jacob Marinsky and Lawrence Glendenin produced promethium at the Oak Ridge National Laboratory, near Knoxville, Tennessee, in 1945. Mrs Coryell allegedly felt they were, like Prometheus, stealing fire from the gods - presumably a reference to the atomic bomb programme, rather than anything significant about promethium itself. But this wasn't the first reference to element 61. 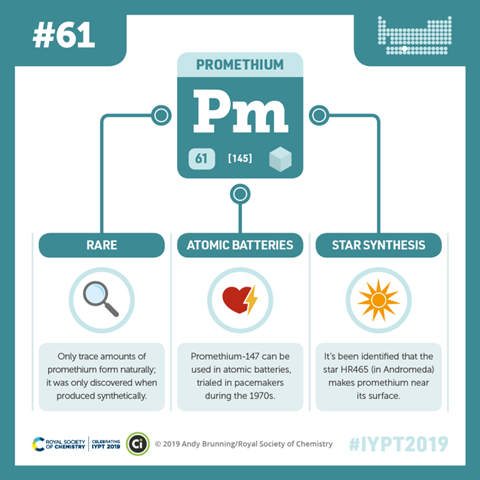 As far back as 1902 there were suspicions that such an element should exist. Promethium sits in the lanthanides, the floating bar of elements that squeezes between barium and lutetium. The rare earth elements either side of it, neodymium and samarium, seemed not to have the right relationship in their chemical properties to be neighbours. It was as if there were a gap between, and Czech chemist John Bohuslav Branner suspected that a missing element occupied that gap.

This suspicion was reinforced by Henry Moseley, the English physicist who gave structure to the concept of atomic number, realizing that it reflected the number of protons in an atom's nucleus. What had, until then, been a rather arbitrary numbering system was given a specific meaning – and in 1914, Moseley realized that there was a missing element in number 61.

Before Coryell's team isolated promethium there were at least two others in the 1920s who claimed to have found element 61. An Italian team found something they named florentium after their city, while an American group in Illinois came up with illinium. Both these findings were announced in 1926, with the Americans publishing first, promptly followed by the Italians, who claimed priority because they had results locked away in a safe dating back two years. But in practice neither of these findings could be duplicated, and apart from a failed 1938 attempt at Ohio State University, the discovery remained unclaimed until the 1945 isolation of promethium. It was a by-product of uranium fuel in one of the early reactors being used to produce plutonium for the atomic bomb. Coryell's team intended to call it clintonium, after the Clinton Laboratories where they worked, until Mrs Coryell persuaded them that the classical name was better.

One of the reasons promethium was so elusive for a relatively low atomic number element is that it doesn't have a stable state – it's one of only two elements below 83 that only has radioactive isotopes, the other being technetium. The most stable form of promethium has a half life of just 17.7 years – that's promethium 145 - so it's hardly surprising that it proved difficult to pin down, though it does occur naturally in tiny quantities in the ore pitchblende when uranium 238 splits spontaneously. The amounts produced are so small - around a trillionth of a gram from a tonne of ore - that promethium was unlikely to be discovered this way. However it would be wrong to say that promethium is negligible in nature. It has been detected using spectroscopes, devices that analyze materials from the light they give off, on the star HR465 in the constellation Andromeda. No one is quite sure why this star is pumping out what must be considerable quantities of promethium. 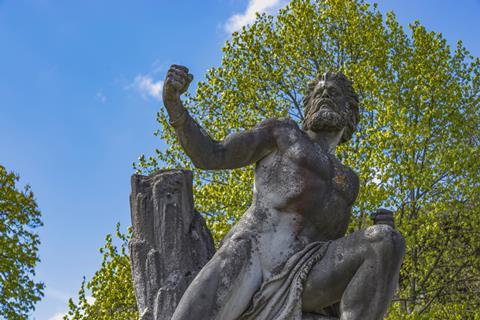 This grey metallic element gives off beta particles – electrons from the nucleus – as it decays. These can cause radioactive damage in their own right, but prometheum is probably most dangerous because those beta particles generate X-rays when they hit heavy nuclei, making a sample of promethium bathe its surroundings in a constant low dosage X-ray beam.

It was initially used to replace radium in luminous dials when it was realized that radium was too dangerous. Promethium chloride was mixed with phosphors that glow yellowy-green or blue when radiation hits them. However, as the dangers of the element's radioactive properties became apparent, this too was dropped from the domestic glow-in-the-dark market, only used now in specialist applications.

The obvious use of promethium is for portable X-ray devices, though this isn't an application that has been properly developed yet. Instead the element's beta radiation has been used in industry to measure the thickness of materials, and the isotope promethium 147 has been used in nuclear batteries. These are long life power sources that make use of the beta radiation (which is, after all, made up of electrons, the source of an electrical current) to generate power. Such batteries, often less than a centimetre across, can keep in action for around five years, twice promethium 147's half life. They have been used in everything from missiles to pacemakers.

In its early days, nuclear power seemed to promise vast amounts of cheap, portable energy. Science fiction of the period featured walnut-sized generators that could run a household, all driven by nuclear fission. In nuclear batteries, promethium comes about as close as we've ever got to a portable nuclear powered energy source. So in that small way at least, it lives up to the titan it was named after – Prometheus, the bringer of fire.

So a provider of portable and long life power named after the bringer of fire. That was science writer Brian Clegg bringing us the powerful and mythological chemistry of Promethium. Now next week an element that shoots us off into outer space, quite literally.

Despite its rarity and hazards it seems appropriate that an element first synthesised during a global conflict that saw the development of the vehicles that would one day take us to the Moon and beyond is now so pivotal to space exploration, providing our robotic pioneers not only with power but also the ability to analyse extraterrestrial materials as well.

Trying to guess what wondrous element this is? Join Richard Corfield to find out the discovery, chemistry and applications of the element curium in next week's Chemistry in its Element. Until then I'm Meera Senthilingam and thank you for listening.