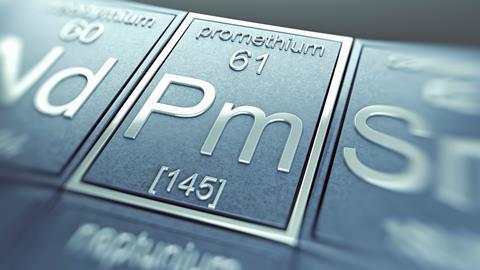 The ionisation energy of promethium has been determined experimentally for the first time, solving an almost 75-year-old mystery and filling in one of the last gaps in the periodic table.

Promethium, element 61, only exists in trace quantities on Earth and has to be synthesised through nuclear reactions. However, since its discovery at Oak Ridge, US, in 1945, no team has managed to measure its ionisation energy – the minimum amount of energy required to remove its most loosely bound electron – through experiments. This created a gap in the periodic table, making it the only element up to lawrencium, element 103, that didn’t have an accurate value.

Now a European collaboration has filled in this blank space. First, a team at the Laue-Langevin Institute (ILL) in Grenoble, France, bombarded a sample of neodymium-146 with neutrons. This caused some nuclei to capture a neutron and undergo radioactive beta decay into promethium-147. The sample was then separated from the neodymium at the Paul Scherrer Institute in Switzerland, before being shipped to Mainz University, Germany for detailed atomic spectroscopy.

The analysis proved challenging, explains Ulli Köster, a research scientist at ILL and co-author of the paper. ‘Lanthanides are very difficult to measure because they have rich atomic spectra. You see so many lines you can’t easily attribute them to a given series.’ To overcome this problem, the team performed both spectroscopy and mass separation on the sample, using laser light to excite an electron before applying an electric field to separate it from the atom. ‘By using this second dimension, scanning the electric field, you can get an electron that’s nearly detached then give it the last kick to make the ion,’ Köster says – and in doing so gain a precise measurement of the ionisation energy.

While the new figure for promethium, 5.58eV, is in line with theoretical predictions, it will prove an invaluable benchmark for quantum chemistry and atomic physics calculations. The remainder of the promethium-147 will be used for Köster’s current collaboration with physicists investigating slow neutron capture in stars – the process that creates around half of the elements heavier than iron in the universe.

Future work will also see the investigation of ionisation energies past lawrencium, with experiments already performed using surface ionisation – a less accurate technique – by scientists at Riken in Japan. ‘The next step will be [the ionisation energies] of the transactinides,’ Köster says. ‘But as you get higher, there are so few atoms it will get more challenging.’