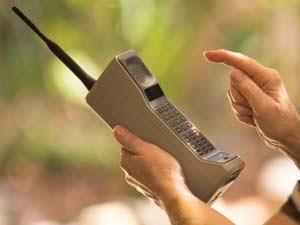 This week, the wonders of modern mobile phones, with Lars Öhrström.

In Oliver Stone’s 1987 movie Wall Street, the anti-hero Gordon Gekko delivers classic one-liners such as ‘lunch is for wimps’, but there is also an image that technology geeks are not likely to forget: actor Michael Douglas walking in the sand outside his beach house on Long Island talking on what now seems to be a grotesquely oversized mobile phone. Gekko’s Motorola DynaTac, also known as ‘the brick’, weighed around 800 grams and was the height of sophistication in the 1980s.

What even technology geeks may not know is that one of the reasons that we now get far less exercise for our biceps is that modern mobile or cell phones contain tantalum(V)oxide or tantalum pentoxide, with the formula Ta2O5. This transition metal oxide has replaced aluminium oxide in the capacitors, making them much smaller and lighter. To a lesser extent, this compound is also used in high refractive index glass and as a catalyst, but the main use of tantalum oxide and tantalum metal is as constituents in capacitors. 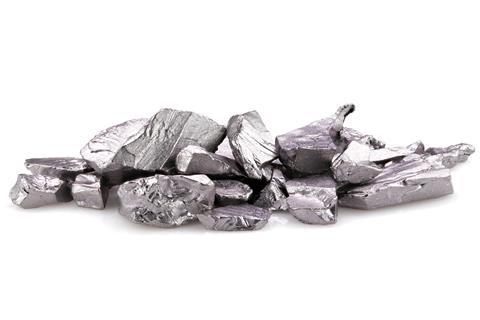 Capacitors are electronic components that can store charges, and one of their functions in a mobile phone is to enhance power performance. By releasing the charges stored in capacitors to help meet the peaks of power the device demands, we can manage with much smaller, lighter batteries.

The tantalum capacitor is built from tantalum metal with a thin layer of deludingly simple tantalum pentoxide, and it is this surface that is the key to their performance.

I say deludingly simple because normally the three-dimensional arrangement of the atoms in metal oxides of this type is not difficult to understand. For Ta2O5 however, this problem seems to be of almost tantalizingly difficult proportions. The first model, obtained from x-ray diffraction in 1964, indicated a simple enough structure with tantalum atoms binding to six oxygens each, and the oxygen bridging either two or three tantalum atoms to form a three-dimensional network. However, there were ‘spots’ on the x-ray photographs that could not be explained by this simple structure. Currently – because this is not quite settled yet – we model Ta2O5 both with six-coordinated octahedra, as in the first model, but also with tantalum atoms binding seven bridging oxygens in what we call a pentagonal-based bi-pyramid.

But the complications do not end there, because instead of two tantalum atoms and five oxygen atoms repeating throughout the structure, there seems to be some 40 tantalum and 200 oxygen atoms to account for before the pattern repeats. This is a bit like finding the recurring motifs of patterned wallpaper. A designer would usually have squares of perhaps 25cm replicating in all directions, not so difficult to spot. The pattern of tantalum(V)oxide, translated to wallpaper proportions, would amount to patterns recurring every 2.5 meters. This is difficult to recognise unless you have a very large wall. To add to this, the thin film grown on tantalum metal by electrolysis gives an even less ordered structure than crystalline Ta2O5, and its exact properties are still under investigation.

What is clear is that the structure is very tight and smooth; it also very efficiently protects the pure metal surface underneath from attacks by oxygen or acids.

The year of the Wall Street movie was significant in telephone history also for another reason: the same year the first mobile phone call was made in the huge and mineral-rich country known today as the Democratic Republic of the Congo, DRC. This brings us to the alleged and controversial source of the tantalum in your mobile phone, the mineral tantalite, with the approximate formula (Fe,Mn)Ta2O6 that occurs together with the similar niobium mineral columbite in eastern Congo; the ore called coltan for short.

The truth is that while coltan mining in the Congo continues to be problematic, the DRC has never been the world’s major supplier of tantalum. A European commission report states that in 2011 Congo accounted for 18% of world production. And although figures of untapped sources are shaky, Congo is currently estimated to hold only 7-8% of the world reserves.

This does not mean that we should ignore this aspect of our technology consumption though. I’d happily buy a ‘fair trade’ mobile phone, but we should have the proper perspective and correct figures. We should also remember the profound impact that mobile phones have had on Africa in general. In 2011 we saw an African country at number 24 on the top list of mobile phones per person: Botswana, with 143 subscriptions per 100 people, higher than the UK at 131. Many sub-Saharan countries have rates between 80 and 90. As a whole, the penetration rate in Africa was 60% in 2012 while fixed landlines in many places are still unheard of.

In a way, Gekko and his yuppie colleagues, who needed to display the newest phones as vital status symbols, paid for this communication revolution. Where and how they got the money to do so is of course a different story…

Lars Öhrström from the Chalmers Tekniska Högskola there revealing the hidden jems of the mobile phone revolution with the chemistry of tantalum pentoxide. Next week, we transition.

The reason ethane is popular is not so much for its own virtues, but rather because it makes an easy, clean transition to ethene, probably better known under its old name of ethylene.

Brian Clegg brings more insight into the transformational chemistry of ethane in next week’s Chemistry in its Element. Until then, thank you for listening, I’m Meera Senthilingam.